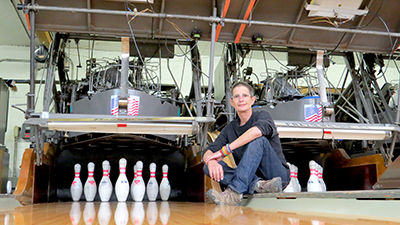 Connie “Sunny” de Castro sits in front of the pinsetting machines at Trinity Lanes in Weaverville. 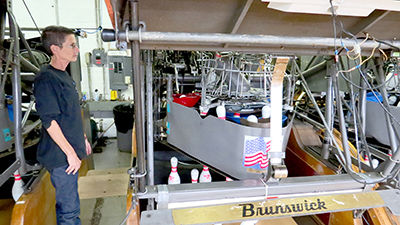 Pinsetter mechanic Connie de Castro was recently recognized by Brunswick for excellence in her field. 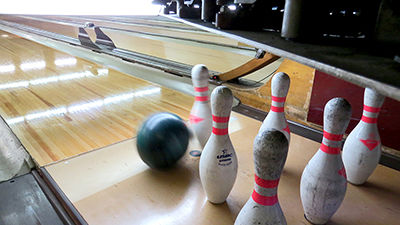 When the ball comes down the lane, it triggers a motion sensor beam, starting the machine that resets the pins. 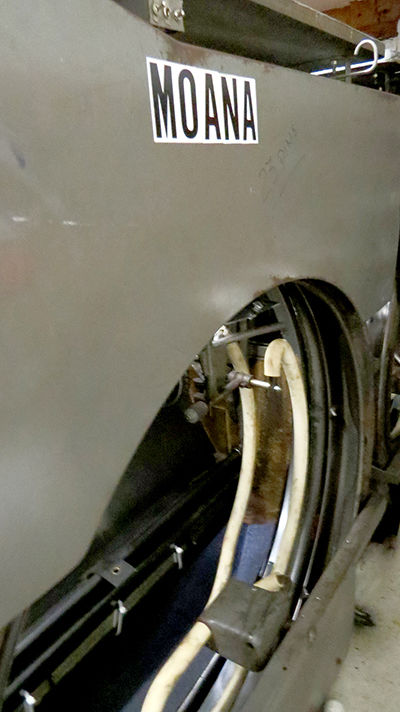 Pinsetter Mechanic Sunny de Castro has named some of the individual machines based on their quirks. Above, "Moana." 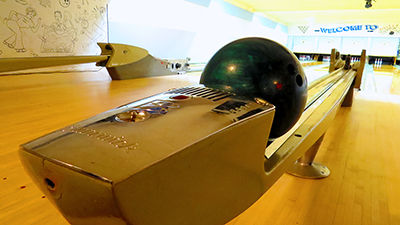 Connie “Sunny” de Castro sits in front of the pinsetting machines at Trinity Lanes in Weaverville.

Pinsetter mechanic Connie de Castro was recently recognized by Brunswick for excellence in her field.

When the ball comes down the lane, it triggers a motion sensor beam, starting the machine that resets the pins.

Pinsetter Mechanic Sunny de Castro has named some of the individual machines based on their quirks. Above, "Moana."

It goes without saying that at one time an actual person had to set all the pins back up every time a bowler knocked them down. Sometime later, a machine was invented which set the pins back up automatically, making for a faster and more precise game. It’s safe to say it might not occur to most people that someone now needs to set the machine back up whenever it’s knocked down, out of commission.

Connie “Sunny” de Castro has been that person at Trinity Lanes for the past few years and she just received recognition from Brunswick Bowling Products for excellence in her field.

A resident since 2004, de Castro moved to the area in 2004 from Roseburg, Ore. She came here to work in nursing, but due to failing eyesight was transitioning into administrative duties at the hospital.

“I transitioned from that to personal training,” she recalled, “but one of my loves since I was in high school, was that I was doing sideline work rebuilding kids bikes in the neighborhood. Parents would give me their kids’ Schwinn or whatever. I would tear it down and repaint it, put it all together. It’s always been mechanics.”

She went to San Diego City College to study auto mechanics and joined the California Conservation Corps where she became an auto specialist. She ran her own auto shop in San Diego for many years.

“I started bowling on a league about five years ago,” she said. “I saw what needed to be done and it just awakened that passion when I got pulled into helping.”

She said the task of keeping the lanes open has become a full-time job.

“All eight of them are running sweet,” she said, noting that league bowling used to go late, concluding after 10 p.m. sometimes since machines stopped and needed repair on the spot. “We’re getting out of here at 9 o’clock now. The machines are behaving themselves, for the most part. I credit it to the same thing you’d tell the owner of a car — maintenance.” She said the entire business gets a monthly maintenance check.

Asked if parts are still available for the machines, de Castro said yes, adding that there are also online groups and resources to help with newer and older machines.

“This was built in 1961,” de Castro said, “and I think it might be one of the oldest continually running businesses in Weaverville.”

As car mechanics often encounter, de Castro said the machines sometimes won’t give any indications of pending failure while she’s watching them.

“They will not misbehave when you’re around them, so I’ve had to set up cameras,” she smiled. “I just let the camera go until the machine does whatever it wants to do. I’ve sat on top of a machine for 20 balls, a full game, and it never acted up once. I went up to the front and in two balls, it acted up.”

Pin jamming is the most common issue, she said, noting that it can stop the entire machine.

“Some are easy pin jams (to fix),” she said. “Some need a hammer and chisel.”

She also noted that the nature of the machines would be unforgiving to anyone working inside if it were to start moving, and deaths have occurred as a result. Before going into any machine, de Castro said she turns off the breaker and makes sure bowlers know not to use the lane.

“We also have to watch kids that are not being watched by their parents,” she said, recalling a time when an unmonitored toddler found his way down the lane almost to the machine.

If you’ve ever wondered how the machine resets the pins, here’s the abbreviated answer. When the ball comes down the lane, it triggers a motion sensor beam, starting the machine. It also triggers a camera which snaps a photo of the top of the pins, and that information is transmitted to the scorer. The machine grabs the tops of any pins standing and lift them to allow fallen ones to be swept onto a shaking deck. Pins and ball fall into a large, rotating circular assembly which lifts the pins up to drop them onto a sort of slide. Pins get rotated to re-enter the machine bottom-first before they drop into a funnel shaped holder, ready to be set on the lane again. Meanwhile, the ball is lifted onto a sort of roller-coaster, which uses gravity to deliver the ball back to the bowler. While most alleys use a below floor system, Trinity Lanes uses an above-ground return, so bowlers can watch the ball come back to them. At any given time, there are 21 pins in the machine, keeping an extra pin ready to stand in for any that get out of the machine.

Saying she has come to know the machines well enough that some issues can be fixed in a minute or two, de Castro partly attributes ease of maintenance to the machines’ engineering.

“They’re neat to watch,” she said. “You have to wonder what the dream was that the guy had when he designed these things. Once you get to know them, they are easy to work on.”

While she was unaware exactly when machines took over the job of resetting pins, de Castro said Trinity Lanes’ machine serial numbers put them in the 30,000 range for production.

“I tell people, ‘They’re 60 years old, give them a break’,” she laughed, later noting that she has named some of the individual machines Moana, Thumper, Bashful, Pokey and Squeaky, for obvious reasons.

Jesse “Vahn” Stone, a legend in the industry, was in Weaverville last year and told de Castro, “you have the oldest machines in the state.” While here, de Castro said she learned all she could from him. Stone passed away in October, having worked on machines since the early 1970s.

Discussions between de Castro and Vahn Stone drew interest from Brunswick Bowling Products Inc. David DiRito, a pinsetter mechanics expert at Brunswick in Muskegon, Mich., said Stone praised de Castro’s expertise in working on the machines and how her work made for a better experience for bowlers who use the lanes. Trinity Lanes owner John Woodhouse told DiRito that de Castro’s mechanical background was an asset when it came to learning pinsetter machine repair.

“Although you have not personally attended our factory pinsetter mechanics school, it’s my honor to present you with your honorary Brunswick Mechanics Coin, among the highest form of recognition in our industry for excellence in mechanical standards,” DiRito wrote in a letter to de Castro last month.

The coin and letter are on display at Trinity Lanes. She said she is the only woman to have received the honor and to her knowledge, no woman has attended or graduated the Brunswick school.

Like the shopping malls, drive-in theaters and video arcades of previous generations’ youth, bowling alleys are a diminishing form of entertainment in the digital age. However, it doesn’t keep many from enjoying the simple novelty and excitement of rolling a ball down a lane to knock down all the pins. According to the Bowler’s Journal, there are about 12,000 bowling alleys remaining worldwide, and bowling remains a $10 billion industry. Bowlers Journal estimates that as many as 67 million people bowl at least once a year and more than 2 million belong to the United States Bowling Congress.

“Bowling alleys are disappearing,” de Castro said, “and it’s sad.” Noting that she travels around to other alleys, de Castro said she sees lanes that have burned down and not been rebuilt, as well as some that simply close and never reopen.

Asked what she would say to someone who has never bowled or is simply looking for something to do, de Castro said, “Come down and try it. It’s fun.” She said the lanes will make accommodations for physical disabilities, preferences and abilities. Snacks and refreshments are available as well.

“Where else can you take your family and have a lot of fun for a couple hours at about $12 each?” she said.