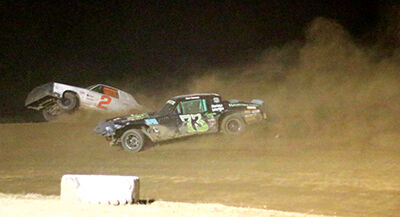 Tressen Smith, #2, was able to get back on the track after leaving turn four next to Russ Newman, #73. 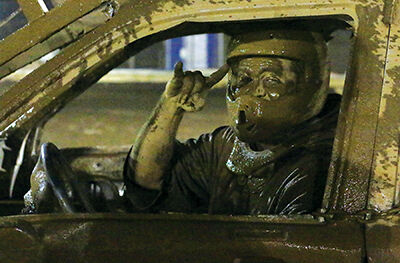 Covered in mud, JD Hudman pulls into the infield to take the checkered flag in the enduro race. 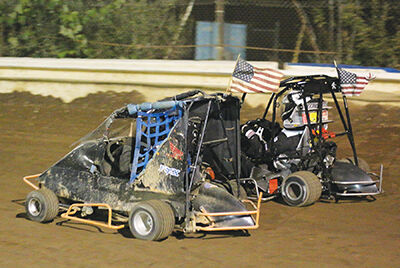 Tressen Smith, #2, was able to get back on the track after leaving turn four next to Russ Newman, #73.

Covered in mud, JD Hudman pulls into the infield to take the checkered flag in the enduro race.

In the smoke of nearby wildfires, Mountain Valley Raceway made up for lost time with races Saturday night, having been closed this season. Due to COVID-19 concerns, races took place in front of an empty grandstand, except for trophy presenters.

Two arriving mini-stock racers each brought small trucks and battled it out on the track. In the Hobby Stock class, six drivers arrived, but one went out early on.

Shortly after racing began, Brian Young, #12, got into the fray and ended up launching his car off the bank of turn three, leaving a 30-foot gap in his tire tracks. Emergency personnel were rushing into the dust cloud when they heard his engine start up. Young was able to limp it back into the pits but didn’t return to the track for the rest of the evening.

Without the audience and a PA system playing, one could hear celebrations in the pit area, race officials yelling to each other. At one point under yellow caution flag, one driver could be heard yelling to another, “This is some damn good racing right here!”

In the Mini Stock Class, Ross Vige of Orland won the heat race and the trophy dash, while Ricky Berry took the win in the main event.

In the kart races, Sean Green of Redding won both the trophy dash and main event.

In the Hobby stock class Tressen Smith of Hayfork took the heat race and trophy dash, but Freddie Leeper of Hayfork added his name to the perpetual trophy in the main event.

It was well after 11 p.m., when the last, and arguably most interesting, race of the night got started.

Enduro rules are simple -- the last car running around the track wins. It doesn’t have to be pretty, it just has to be able to get around the track under its own power. Otherwise, there are no rules and no yellow flags.

Three vehicles, a Ford Ranger truck driven by Kyle Thurman of Hayfork, a Lincoln Town Car driven by JD Hudman of Hayfork, and a mid- eighties Oldsmobile Firenza driven by Larry Richardson of Hayfork, took the green flag from a dead stop. Hudman’s Town Car, an obvious veteran of other enduros and demo derbies, resembled a soda can that was crushed as much as it could be before becoming a solid chunk of aluminum. Richardson’s Firenza proved to be a zippy little predator while Thurman’s Ranger was ready with a battering ram bumper.

Racing started off clean, with space immediately opening between competitors. However, when that distance closed, dust, mud and parts started flying. With a helpful nudge here and a kick-in-the-butt there, drivers showed no love when it came to helping each other off the racetrack.

On the slippery bank of turn four, Hudman seemed to be perfecting the art of the 360 degree spin before chugging back down the front stretch. At one point, Thurman was able to shove the little Firenza off the track in turn three and zip away. However, the move placed Richardson strategically behind the Ranger. However, just before the Firenza could pounce, the Ranger threw open its own hood, blocking Thurman’s view. The truck’s autopilot put its foot to the floor and sent the Ranger careening off the front stretch and straight into the barrier tires. Thurman attempted to rejoin the battle, only to find the impact had broken the truck’s steering.

The race then became a game of mouse and cat, with Richardson and Hudman regularly switching roles. The faster Firenza had little problem eluding the bigger Town Car, allowing it to pass unscathed several times. At one point, Hudman played the “no rules in enduro” card and took a shortcut across the infield to go after Richardson. In return for his stunt, race officials shook a red flag at him, warning him to keep it out of the infield.

Hudman, a man who obviously does his best with what he has, opted for a different approach as he snuck off the track on the outside to hide behind the bank of turn 3. When Richardson approached, Hudman pounced.

Spectators in the infield got a quick look at Hudman’s dirty undercarriage as he launched the Town Car, Dukes of Hazzard style, back onto the track. Although Hudman was unable to squash the little Firenza, his uncontested move set a precedent for future attacks. A few laps later, the faster Firenza was able to bait and set the same trap.

In a cloud of rocks and dust, Richardson jumped back onto the track, putting himself in front of Hudman on the next lap.

Unfortunately, the jump also cost him a front tire, taking away his advantage of a quick escape. Smelling Firenza blood, the battered Town Car circled the track like that scene in Jaws where the sheriff says they need a bigger boat. In the dark waters of turn four, it lunged, sending Richardson’s Firenza off the track.

Its engine was audibly struggling as the little Firenza got back on the track in search of revenge, which sadly, Richardson never got. After a few laps of car-tag, his front rim was worn almost to the brake rotor, when Richardson pulled into the infield and stopped, handing the win to Hudman.

A mud-covered Hudman emerged from the still running Town Car after spinning celebratory circles in front of an empty grandstand. With no trophy, no audience, and no winner’s circle, Hudman went home with only a crushed Town Car, several pounds of mud and the ability to truthfully say, “Man, you should have seen me jump my car that night...”