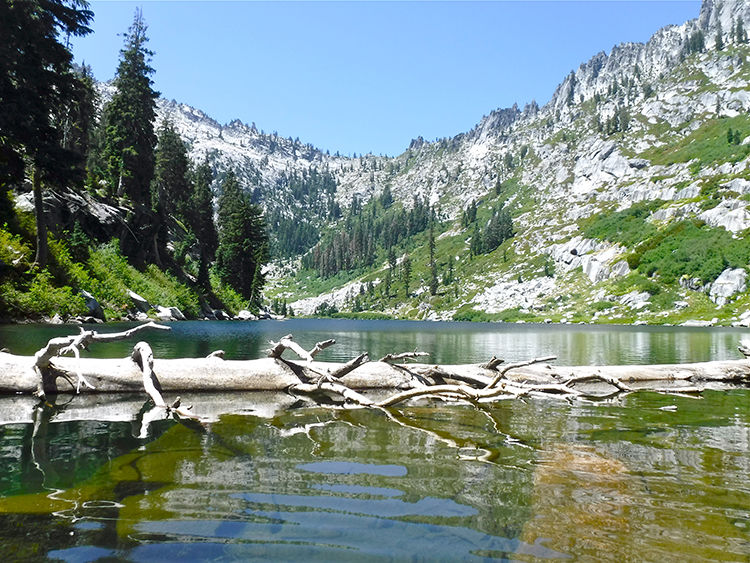 Alpine Lake in July. A significant elevation rise on a south-facing slope makes the trek to Alpine Lake challenging for hikers. But the payoff is beautiful. 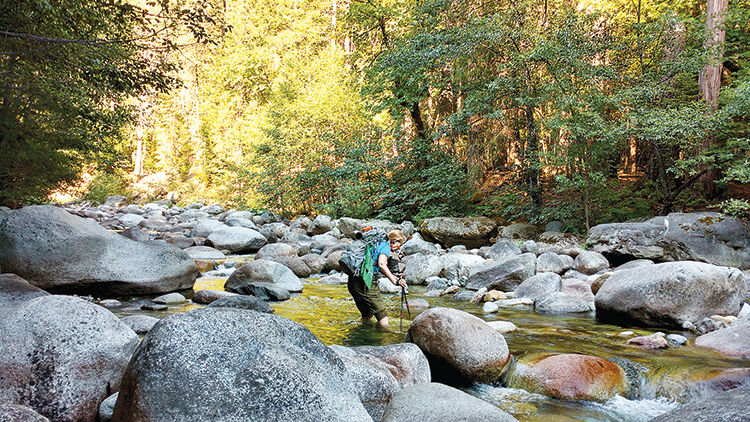 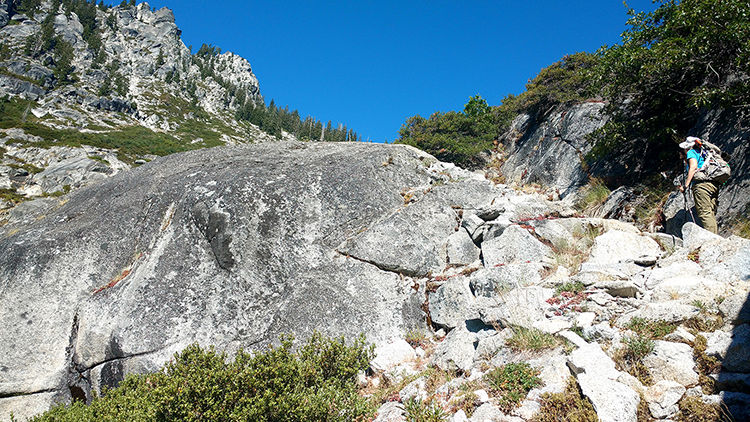 The rocky approach to Alpine Lake. 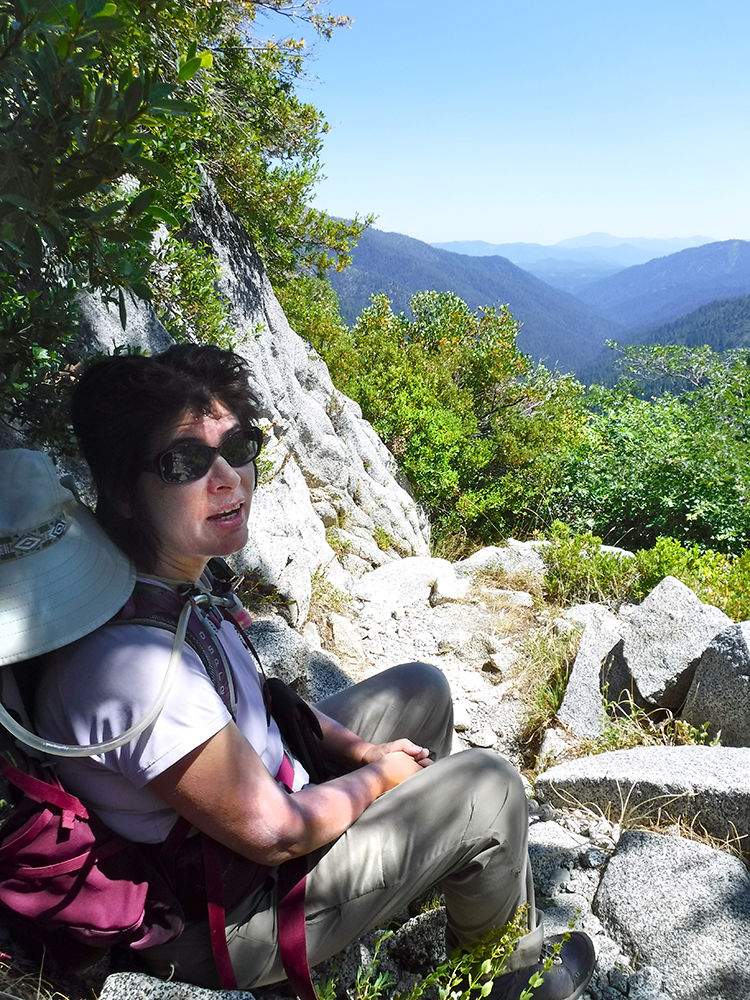 Taking cover in a bit of shade.

Alpine Lake in July. A significant elevation rise on a south-facing slope makes the trek to Alpine Lake challenging for hikers. But the payoff is beautiful.

The rocky approach to Alpine Lake.

Taking cover in a bit of shade.

We pondered and plotted the hike to Alpine Lake for a long time. When your top speed on flat ground is 2 mph, a certain amount of cunning is needed to avoid hitting the last three-plus miles climbing 2,600 feet in the glare of the afternoon sun.

We have heard horror stories of hikers laden with full backpacks struggling up that sunblasted, southfacing slope in the late afternoon, ducking into whatever meager shade of a shrub they could find to lie panting like dogs until they could muster the strength to stagger on. Yeah, that’s not us.

Full of anticipation and a bit of trepidation, we headed up the Stuart Fork Trail on a July morning last year with the modest goal of reaching the fork to Alpine Lake five miles in. The hike to the fork is a pleasant, rolling section of trail that parallels Stuart Fork Trinity River with lots of access points to enjoy the water; we took a lunch break at each one.

We had been hearing that the crossing was still “iffy,” so before unpacking we practiced crossing to see if it would be doable. We’re not into hairy creek crossings, and Stuart Fork actually qualifies as a river, sometimes uncrossable until late July.

With sandals and trekking poles we navigated carefully around big boulders as water rushed past. It was only knee to thigh-high but still had considerable force.

Reassured that Stuart Fork would not foil us, we crossed back and set up camp.

We crawled into our tents with plans of tackling the mountain at daybreak.

Early the next morning ... well, after coffee, we left camp behind and started our ascent. Neither of us had been up this trail. Nothing like new ground to get you into the moment.

The moderate uphill through woods quickly turned to steep uphill and rock steps — some of which were designed for very tall people. The Alps reward effort, though, and the higher we got the more interesting the granite landscape.

Although the guide books show one water source along the trail to Alpine Lake, it was a dry year and we didn’t come upon water until we were almost there. The higher you go the fewer trees, and shrubs became our shade source for frequent breaks. We chugged electrolyte drinks on these breaks. Maybe too much of it, we’re thinking. Most people don’t gain weight on this strenuous hike. We both came home three pounds heavier.

At last, the jagged rocky backdrop to Alpine Lake came into view. Years ago the tall peak on the right was informally named Mount Trinity Journal by someone — we’re not sure who. A certain editor would have loved for us to scramble up there and plant a flag. We’re going to refer him to the masochists we mentioned earlier.

The trail crossed the trickling outlet for Alpine Lake and we dunked our overheated heads in its rock pools before making our way to the lakeshore.

Alpine Lake is good for swimming. The tall toothy granite walls that hold the oblong lake do give the sensation of being within the gnashers of some huge prehistoric beast, getting your last glimpse of bright blue sky.

We saw a couple on the opposite shore. Perhaps they were headed for Smith or Morris lake, a side trip we were not quite up for.

In the heat of the afternoon, we made our way back down the rock steps, thankful for our trekking poles. Into the forest. Across Stuart Fork. And to our little campsite for another night by the river.

We hiked out the next day feeling like champs. With a couple of miles to go our friend Mike surprised us while we were taking a reclining snack-break, sprawled out by the river using our packs as backrests. We were in no hurry to move along until Mike pointed out a small bat Army-crawling toward us on the ground nearby. That got us on our feet.

Being bad-asses, we declined Mike’s offers to carry some of our stuff. He’s a good story-teller and he helped us get through those last, endless miles when the parking area fails to appear as expected around every corner.

The car was a welcome sight, as was the little store at Trinity Alps Resort on the drive out. We treated ourselves to ice cream and regaled each other with highlights of our Alpine Lake adventure.

Due to the river crossing, this hike generally isn’t safe until mid- to late-summer, depending on what type of water year it is. Check on the status of the Stuart Fork crossing beforehand, or be prepared to change your plans and continue on to another destination if the crossing looks treacherous. Take Highway 3 to Trinity Alps Road, which is 13 miles north of Weaverville. Turn onto Trinity Alps Road and drive 3.5 miles to the trailhead.