Swimmers dive into the Lowden Park Pool during the Weaverville Waves Invitational Friday. 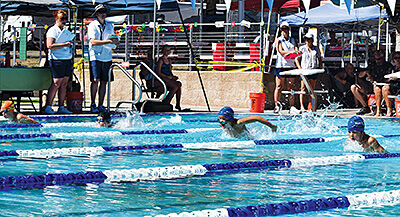 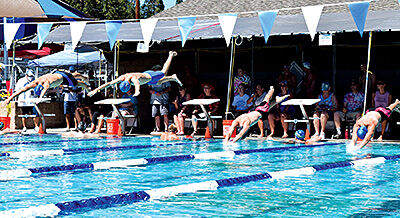 Boys start off the race with a dive into the water at the annual Weaverville Waves meet.

Swimmers dive into the Lowden Park Pool during the Weaverville Waves Invitational Friday.

Boys start off the race with a dive into the water at the annual Weaverville Waves meet.

The Weaverville Waves Swim Team took first place this past weekend at the Weaverville Waves Invitational Swim Meet which they hosted at the Lowden Park Pool. The swim meet draws a large crowd to Weaverville as teams travel from out of the area to participate in this three-day event. This year the theme was “Peace, Love and Splash” and the swimmers represented well with costumes, dance routines and sing-alongs to win their team spirit points. The following teams participated in the WST Invitational: South Siskiyou Swim Team, Scott Valley Sea Serpents, Redding Aqua Ducks, Red Bluff Rockets, Lassen Volcanoes, East Carolina Aquatics and the Durham Dolphins.

Veronica Kelley-Albiez, president of the board at Weaverville Waves, said this year was their first year coming back to somewhat normal meets, since the pandemic began. Although they had to change their traditional third week of July annual meet time because of the fair, the attendance was still higher than last year’s, despite some teams not being able to make it to due to the event date change. Regardless, she said it was still phenomenal racing and the kids had fun.

“The kids loved it. It was great. Peace, love, splash, what isn’t there to love?” Kelley-Albiez said. “There was dancing and some solid competition. We try to create this destination meet, and our goal is to partner with the local community to get our guests to get around and spend their money in Trinity County.”

The money funded through the meet is helpful to keep the team going every summer, Kelly-Albiez said. She said it cost about $10,000 to rent out the pool at Lowden Park for the summer, so any funds help them keep going, purchase training equipment and it helps with their end-of-season pool party.

The Waves will be wrapping up another successful swim season at the end of July.