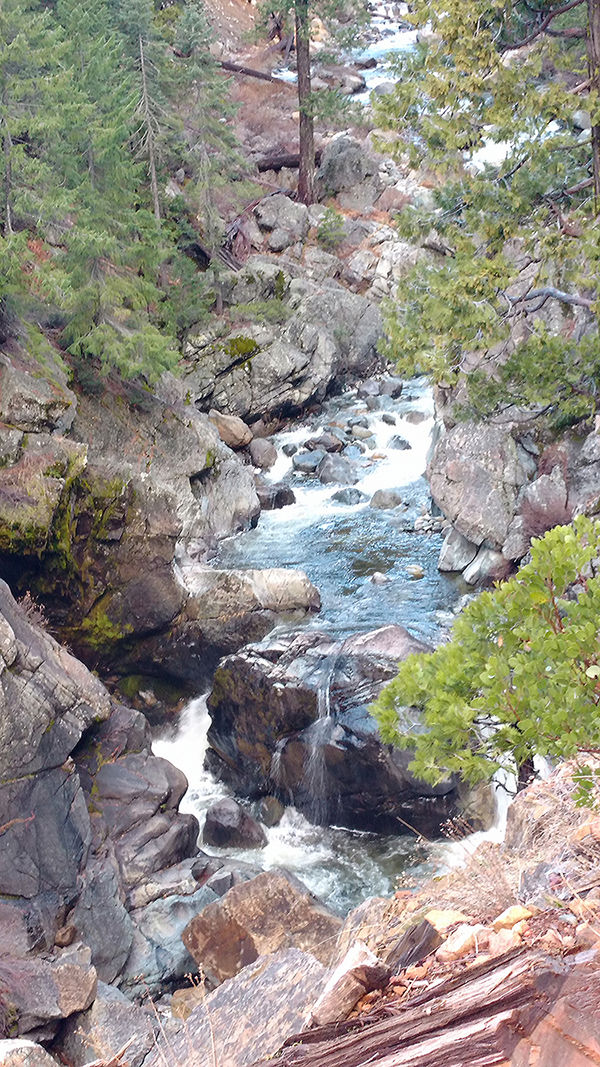 Swift Creek Gorge, a spectacular sight although a little short on water in early January. 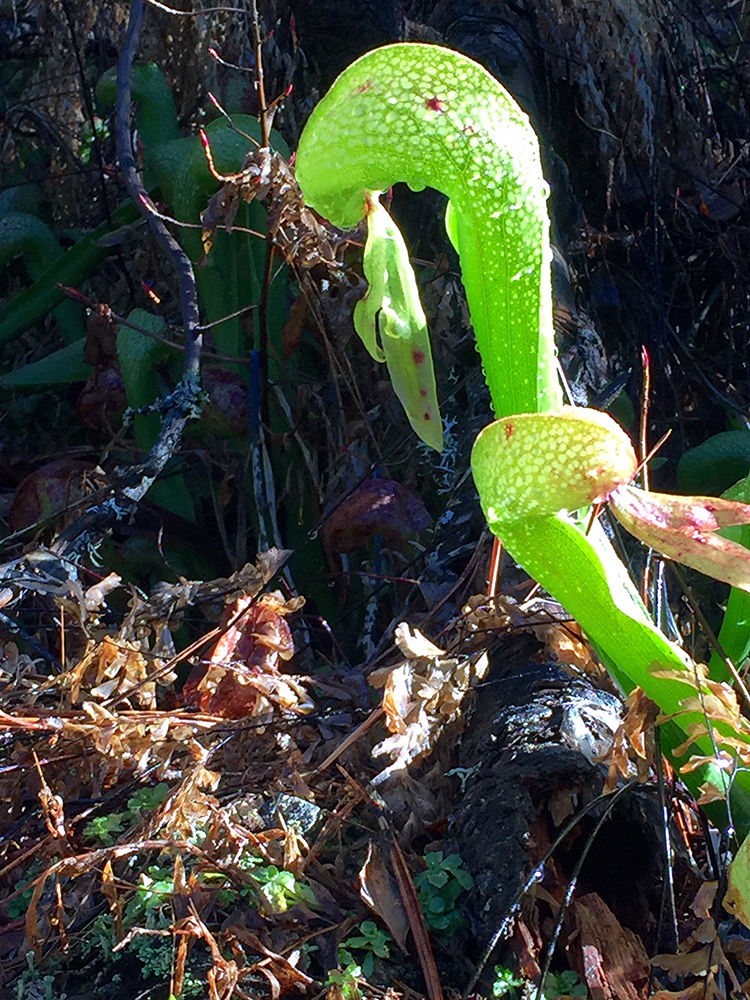 Swift Creek Gorge, a spectacular sight although a little short on water in early January.

On a sunny Sunday in early January we headed up to Poison Canyon in the Trinity Alps Wilderness hoping to hike to Lilypad Lake. We had reservations about the road to the trailhead, knowing that when it traversed to the north side of the ridge we could be stopped by snow. But the road was snow-free. Road and trail conditions have since changed, but on that day it was, “Woo hoo! Lilypad Lake here we come!” We were feeling unstoppable when BAM! Stopped by a gate closed for the winter. We spent a minute in denial and actually got the map out to make sure we were on the right road. Yep. No denying that or the metal gate, bullet riddled but still standing strong.

We turned around and headed to nearby Swift Creek Trail. Swift Creek is a favorite of ours and we’ve written about our treks up this trail in the past.

A quarter mile up the trail is one of the best displays of California pitcher plants in the Alps. Generally, in the winter, these carnivorous darlings are dead to the ground. We were delightedly surprised to find them still green and perky under the sunny blue sky. We hung out and photographed them for a while then headed on up the trail. About a mile up the trail we arrived at the fork and we had to make a decision: Turn left toward the very popular Granite Lake or head right to continue up Swift Creek. There had been one other car at the trailhead and we gambled that they had taken the popular left fork. We stayed right and didn’t see another person all day.

Not far after the fork the trail enters Swift Creek Gorge, usually spectacular in the winter with rushing water foaming around big boulders far below the trail. However, on this January day it was merely flowing at a summer-like level. We suggested to the universe that a little rain would be a good idea. But after our hike, please.

It’s easy to be distracted by the creek and not notice there’s an equally wonderful show on the other side of the trail: a very old forest filled with towering firs, cedars and pines. The pines in this area are primarily Jeffrey and ponderosa which are very similar in appearance with bark like a jigsaw puzzle. We’ve heard of a way to tell them apart with the “smell-test.” We found two towering test-trees and buried our noses in the bark. One smelled like vanilla ice cream smothered in hot caramel sauce. The other smelled like tree. Problem was, we didn’t remember which was which.

Not to be foiled we went on to plan B, a tip we know about pine cones. “Gentle Jeffrey. Prickly ponderosa.”  We picked up a cone from under each of the trees and ran our hands across them. Both seemed to fit into the prickly category.

We later consulted U.S. Forest Service Botanist Julie Kierstead Nelson, who said in an email, “One of my favorite pastimes is to ask anyone who professionally hangs names on conifers (forester, ecologist, botanist, et al.), how to tell Jeffrey from ponderosa without a cone. I get all kinds of answers, not consistent. Some people can smell the difference; I cannot. Some people say yellow green new ‘candles’ (shoots with undeveloped needles) vs. purplish candles; bright green foliage vs. gray-green. If I have a small prickly cone, it’s ponderosa. If I have a big unprickly cone, it’s Jeffrey. The cones aren’t always one or the other.

“In Trinity County, I rely on them sorting themselves by habitat—if it’s on ultramafic (“serpentine”) soil, it’s Jeffrey, and if it’s on ‘normal’ soil it’s ponderosa,” she said.

Soils … another feature to scrutinize while meandering the big outdoors.

Continuing on up the trail after our tree ponderings, we assumed Steer Creek would be our turn-around point but we found it to be easily crossable tromping through 2-inch deep water. Happy about the opportunity to hike a little farther we kept going. We came upon the charming little meadow on the right side of the trail where we always stop to look for bears, musing every time that if we were bears we would romp here. Nary a bear have we seen in this meadow but that doesn’t discourage us; we pause to muse this time, too.

We could hear Parker Creek ahead and knew our hike was ending. But what!!? Another surprise. With careful rock-stepping, we were able to cross with dry boots.

We were elated to make it to Parker Meadow to eat lunch near the Lorna Doone rock (so named because once we ate an entire box of Lorna Doone cookies here). In hindsight, it might be a mistake to name a landmark four miles up a trail after a favorite food.

As we lunched we watched the rain clouds rapidly overtake the vivid blue sky and felt a few rain drops on our skin. We made it back to the car in good time.

Another delightful addition to this series. Thank you, ladies.