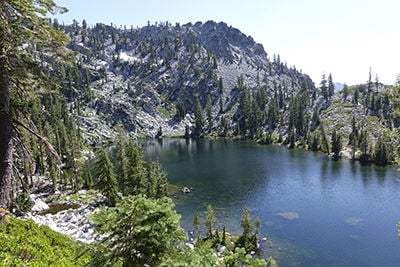 Foster Lake, above, offers the reward of a cool dip after a strenuous hike. 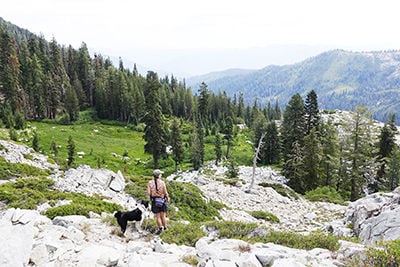 Granite and greenery along the trail.

Foster Lake, above, offers the reward of a cool dip after a strenuous hike.

Granite and greenery along the trail.

It was 6:02 p.m. when we hoisted our packs, heading toward Lion and Foster Lakes — about eight miles distant. Before you think we were either crazy or very fast hikers, you need to know Boulder Lake was only two miles away, and our first night’s destination. There were three groups camping there, so we headed to the other side. We found out why it had pretty campsites but no people — the mosquitoes were the thickest I’d seen in years! Without even stopping to discuss it, we turned around and set up our tents closer to the others. It was fine there.

The next morning, six men arrived, also headed toward Lion and Foster. They suggested we decide together which group was going to which lake. We knew both were spectacular, and they preferred Lion, so we chose Foster, which is an extra 1.5 miles up the trail. We found out later that this was their 31st year of backpacking together, and Lion Lake had been their second trip. Pretty special. Although part of the reason I love backpacking is for the near-solitude, I also enjoy the stories you occasionally hear from other hikers. Needless to say, they had some good ones.

My friend and I joined the over-60 crowd fairly recently. Since these men ranged from 65 on up to 72, this helped us to feel young and capable. Especially when we passed them. At beautiful Boulder Creek, we discovered the tallest delphinium we’ve ever seen. We stopped there to splash about and cool down before starting what our guide book called a trail “as steep as any trail in the Trinity Alps.” I have seen many trails that were steeper, but what made this trail “special” is that the uphill pitch was unrelenting for nearly four miles. Half of it was through a fairly thick forest, then the landscape opened up, and we were entertained by distant views and small meadows of wildflowers. We stopped for lunch in one and stayed longer than we’d planned, entranced by the pinks, yellows, blues and whites Mother Nature had in her garden.

The trail for Lion Lake forks off 6.5 miles from the trailhead, but we continued our steady climb. Soon we were rewarded with being able to peer almost straight down to Lion Lake, then we continued another hour or so to Foster.

We relaxed away the rest of the afternoon with one of our favorite Alps activities: swimming. Nothing better than submerging one’s body into an alpine lake and twirling around for the visual feast of gray and dark green provided by the tree-studded granite cirque and boulder fields.

Another treat awaited — climbing out of the lake to lie on a slab of sun-warmed granite. It takes every bit of discomfort out of your body as you absorb the heat. OK, some muscle aches may come back, but for awhile, everything is sublime.

The next morning, we headed back. We left our backpacks at the trail junction for Lion Lake, and unburdened, made it to the water in 20 minutes. Last time I had been to Lion Lake, I was 17 and on a day hike with a new boyfriend. He’s now my husband of 40 years, so this much later, not too much about the lake looked familiar. However, my 61-year-old body wonders how I hiked both directions in one day!

While the downhill certainly was quicker than the hike up the day before, it gave different muscles a workout. The last mile to the car dragged on forever, but we felt very fortunate to have had the time and energy to complete another adventure.