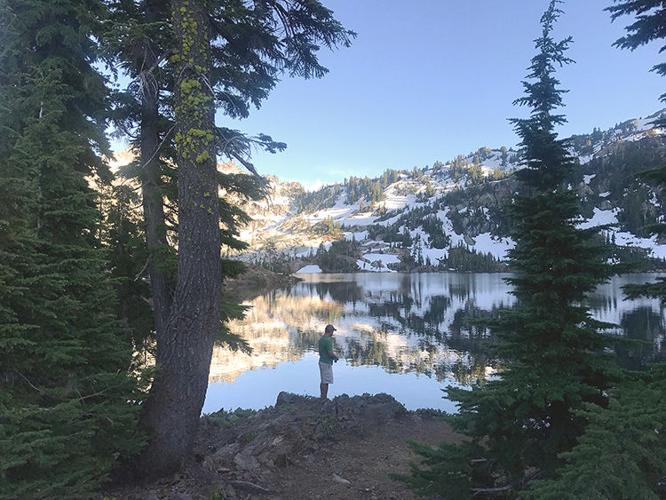 The writer’s brother, Clarke Morris, fishing at Upper Caribou Lake in the Trinity Alps Wilderness in mid-July. The hike to the Caribou Lakes is a tough one but it is rewarded by three alpine lakes in close proximity and lots of granite. 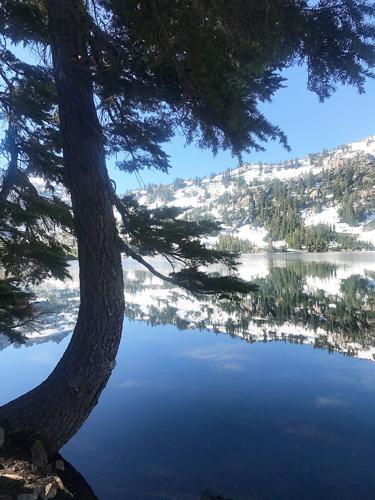 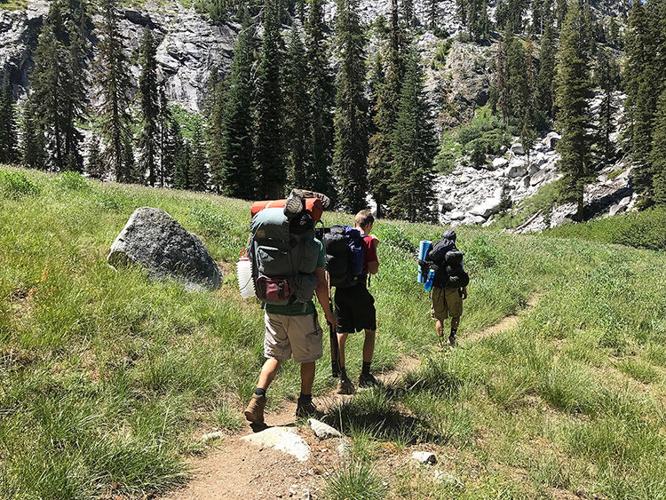 Hiking to the Caribou Lakes.

The writer’s brother, Clarke Morris, fishing at Upper Caribou Lake in the Trinity Alps Wilderness in mid-July. The hike to the Caribou Lakes is a tough one but it is rewarded by three alpine lakes in close proximity and lots of granite.

Hiking to the Caribou Lakes.

Toward the middle of July my brother and his two boys joined me for a trek into Caribou Basin, home of the Upper and Lower Caribou and Snowslide Lakes. The trail is also part of the Bigfoot Trail, a 360-mile route through the Klamath Mountains featuring the second-highest level of conifer biodiversity in the world.

Starting at the Big Flat Campground at the end of Coffee Creek Road, we were thankfully on the trail fairly early. The initial climb of switchbacks after crossing the South Fork of the Salmon speaks volumes as to the challenge ahead. About 9.5 miles into the lake basin the trail is a steady climb the whole way, and with the snowfall this year there were many downed trees on the trail that made the route challenging for backpackers and by a certain point, impossible for horses. I should note that on my way out I ran into some hunters on horseback who were clearing the trail in preparation for the season. Good folks who love the Alps. I thanked them profusely for their work.

There are two routes to Caribou but only one I would recommend to first-time visitors. The “new trail” rises from the aforementioned switchbacks and then runs around the side of the mountain, giving a view of Packer’s Peak to the west and eventually dropping into a little meadow that was in full bloom with hummingbirds in the cool of the morning.

The “old trail” splits off to the left and goes up and over instead of around the mountain. Having endured that hike last summer, and knowing the likely snow-load and deadfall, I recommended that we not subject ourselves to that adventure. Be advised that the “old trail” is best for those with good knowledge of it and who are carrying a lot of water, and not for the inexperienced.

Taking the “new trail,” after going around the mountain, you’ll head up from the little meadow as you switchback up (did I mention switchbacks?) to the granite where the trail is well hewn into the side of the mountain. Eventually, you’ll see Caesar’s Cap off to your right, the four-watershed motherlode of the Trinity Alps. My nephew and I had been there a few years ago during his first Alps trip to Grizzly Lake. It was great perspective to see from afar the peak and the snow field we had skirted around a few years prior. The next “wow” moment on the Caribou trail is the waterfall coming out of Lower Caribou and finally the full basin with all three lakes in view.

Our crew did really well on the hike in. We practiced the fundamentals of staying hydrated, stopping in the shade and keeping fuel (food) in our systems. Other than a close encounter with a wrist-diameter-sized rattler, the hike in was solid. We camped at Upper Caribou Lake and although there were a few other campers up there, there was plenty of privacy.

My crew could only stay for one night but I stayed for a second and powered my way up to the ridge between Caribou and the Stuart’s Fork drainage, allowing me to look into Emerald and Sapphire Lakes.

Caribou is a tough hike and the hike to the high pass beyond is no cakewalk. One of my favorite quotes from a hunter/mountaineer acquaintance of mine is apt for Caribou: “If you have to ask too many questions, you’re probably not ready.”