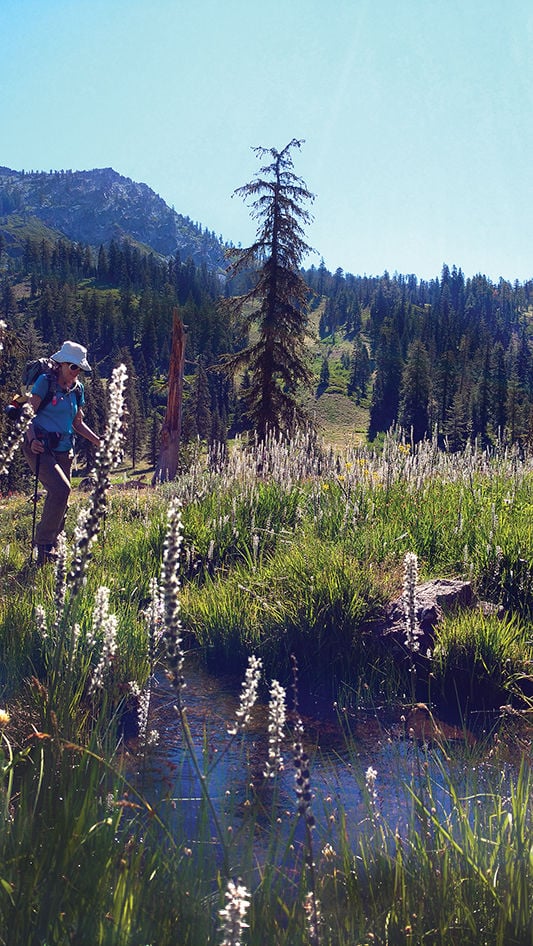 Cathy Anderson hikes among the wildflowers on the way to Landers Lake. 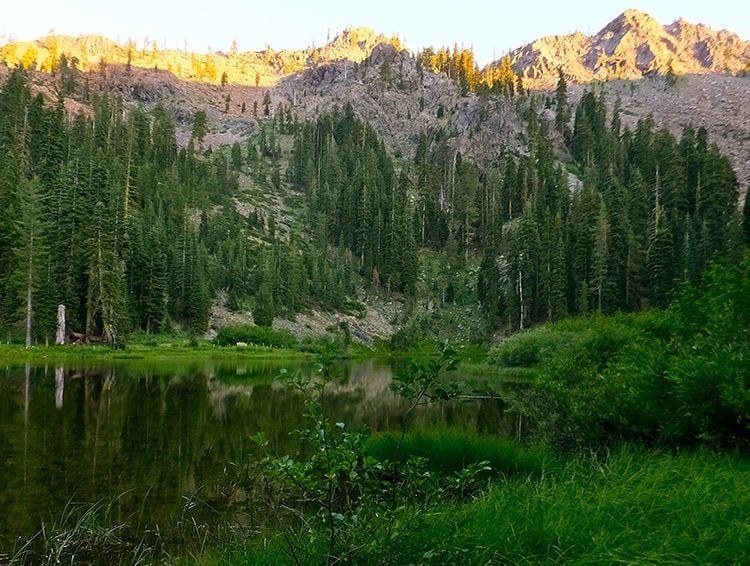 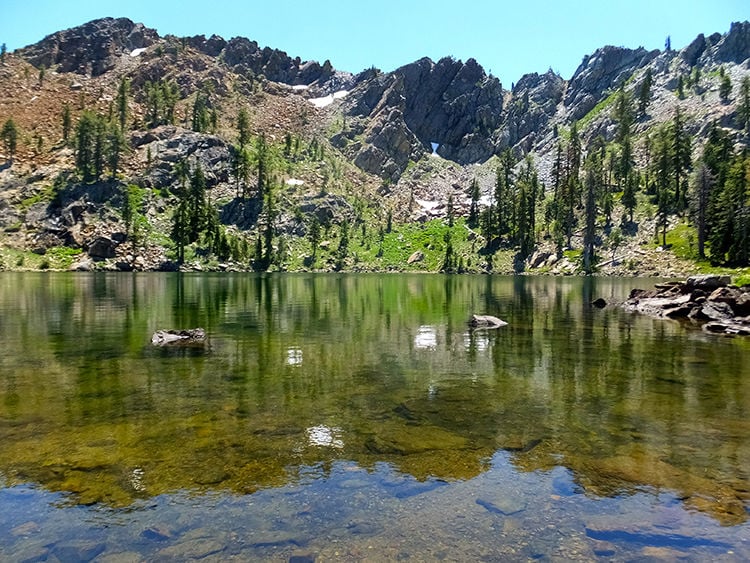 Cathy Anderson hikes among the wildflowers on the way to Landers Lake.

Union and Landers lakes in the Trinity Alps Wilderness have their differences. Union is relatively easy to get to and has a lot of greenery around it. Landers, cupped high amongst some rocky pinnacles, doesn’t get a lot of inflow and often has a moonscape appearance.

Driving to the Union Creek Trailhead along Coffee Creek Road on a Friday in late July, we had a plan. We would hike a few miles up Union Creek but camp short of the lake to avoid the hordes of faster people and horses who would take the prime spots first. Then, day hike to Union and Landers.

Reaching the trailhead, we were surprised to see there was only one other vehicle.

The first few miles of Union Creek Trail follow a former road. The trail is moderately steep and somewhat exposed for the first 2.5 miles as it makes its way to a bridge crossing of Union Creek. Just before we reached the bridge we passed a group of young hikers headed out after a five-day backpack. They were with Ascend Wilderness Experience and the Indian Valley Summer Camp. So nice to see kids getting out in the wilderness!

They were headed back to that other vehicle at the trailhead. We headed for Union Lake.

Once across the bridge the trail levels out and gently climbs the remaining four miles to the lake. Along the way, the trail passes intimate little pockets of green, sprinkled with wildflowers. Just before the trail forks (right to Dorleska Mine, left to Union Creek) is a delightful meadow. We were lucky to pass by as the corn lilies were in full bloom.

About half a mile after the Dorleska fork, the trail forks again. We turned right to get to Union Lake, a small shallow lake at 6,050 feet. There is limited lake access due to vegetation along the shore. But from our camp we sat slightly above the lake and watched the fish jump and the osprey hunt.

After dinner, we got the map out and studied the route to Landers Lake. As the osprey flies it is a short jump over the ridge. To get there on foot, we would need to backtrack to Union Creek, hike around the ridge and then up the other side.

Saturday morning we were back on the Union Creek Trail and hiking up the Union Creek watershed. It is a narrow long watershed that is wall-to-wall meadow. Besides the variety of flowers, the meadow is punctuated by some of the oldest trees we have seen in the Alps. We pointed out one venerable tree after another and were so enchanted that we struggled to make forward progress. We sat, took photos, walked a few steps, sat, took photos, walked a few steps, … you get the idea.

By the time we got to the Landers Lake fork, a mere two miles up the meadow, we had meandered half the day away. And here’s where the work starts. It is a very steep, mile-long climb to the top of the ridge. Along the way we met a group of teenaged hikers from Camp Unalayee finishing a 14-day backpack. We asked one of the hikers how far we were from Landers Lake and she said “almost there.” It turns out that “almost there” in teenage-time is equal to two grueling hours in Amy-Cathy time. Besides these hikers, we did not see anyone else along the way.

Imagine our surprise then when we arrived at Landers Lake and encountered a crowd. Including the two of us, there were 15 people at the small lake. Landers Lake is interesting. It is a high-elevation lake (7,100 feet) which is fed only by snowmelt. When we have visited before, the lake was a muddy puddle lined with black rock. Eerie. But this year our timing was right and we got to see the lake full. Landers Lake is absolutely beautiful when full, and, turns out, it is good to swim in. We swam awhile and ate lunch and then explored above the lake a bit where we found another meadow.