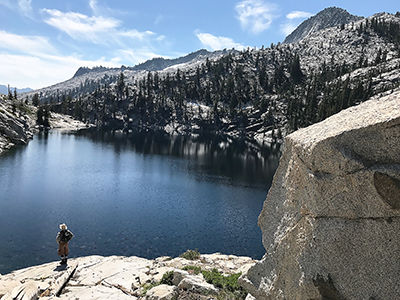 Cedric Twight looks over Smith Lake in the Trinity Alps prior to a storm. 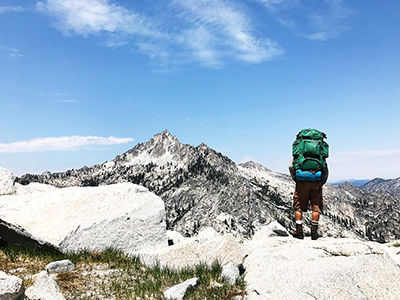 Hiking in the Alps.

Cedric Twight looks over Smith Lake in the Trinity Alps prior to a storm.

Hiking in the Alps.

As the rain fell and thunder boomed early this morning (Thursday, Sept. 7), hopefully helping and not exacerbating our local fires, I cringed and thought of my backpacking experience earlier this summer.

It started off well. My cousin Cedric Twight (grandson of the renowned Alice Jones) and I were all fired up to get to Smith Lake up on top of the divide between Canyon Creek and Stuart Fork. A few years ago, I had attempted this with my friend Dan Zook but we took an ill-advised route and, rather than collapse from heat stroke, turned back.

Cedric had been there before. We sprinted in as far as we could on the Stuart Fork trail on a Thursday night and camped. This allowed us thankfully to set out for Alpine Lake early the next morning, since the trail up to Alpine is unrelenting and the last third of it is very exposed. We made it up in good shape. We were thinking we wouldn’t see much rain this trip, so neither of us brought a tent. Instead, Cedric had a pretty nifty bivouac setup that we used that first night as just a few random sprinkles hit us. The next morning, we set out early for Smith Lake. Between my experience two years prior and Cedric’s previous trek, we found the right route (the lower part of which is straight up using brush as handholds —  not pretty). After ascending a massive granite slope, we crested the top and were able to see Morris Lake, nestled into the front of Sawtooth Mountain and above Smith, which is not visible from the pass.

The next 18 hours were fairly uneventful with a swim, dinner and a good night’s sleep at Smith followed by a hike up to Morris Lake the next morning. About 2:30 p.m. that afternoon, we started to see thunderheads build and began our descent from Morris. By the time we got back down to Smith, we knew it was too late to try and make an exit down to Morris Meadows or Canyon Creek (we were on the divide). So we covered our gear and prepared to hunker down. Thankfully, we also had time to get an early dinner. The next two to three hours consisted of getting pummeled by gale-force winds, massive hail and lightning strikes within 300 feet of us. Smith Lake was pure white caps and waves. Our place of minimal refuge was in between a large boulder and the granite slope of the lake cirque. It didn’t provide much cover but it was the best we could do. We both ebbed in and out of the fetal position and shouted out expletives that more often than not, coincided with the crack of the close lightning strikes. Toward the end, I was borderline hypothermic and during very small breaks, I would stand up and do jumping jacks and short sprints on the granite to stay warm. The storm eventually passed (as the sun went down) and we retrieved our gear and proceeded to rig the bivouac for the night.

Cedric and I both have decades of backcountry experience and on our way out the next morning we had plenty of time to recount the events of the previous afternoon/evening, and we agreed that it was the scariest situation either one of us has faced in the backcountry.

Understanding danger and how to survive extreme events is part of our mountain life experience. Our communities have certainly proven their courage in the face of overwhelming odds over the last week and a half. My backcountry lightning-storm episode will not stop me from backpacking again, and I know that the recent fires will not deter our communities’ will to survive and flourish, either.