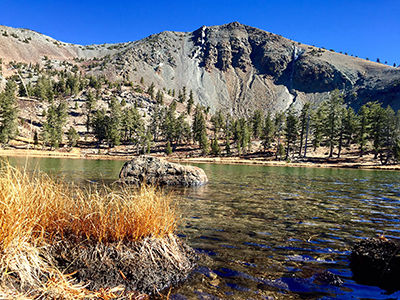 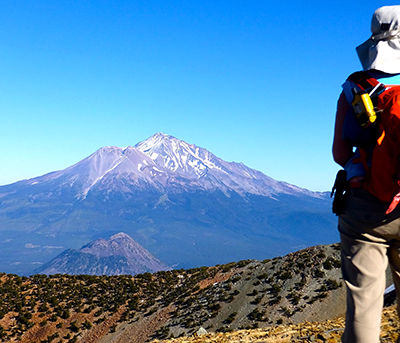 The view of Mount Shasta from the top of Mount Eddy, Black Butte in the foreground. 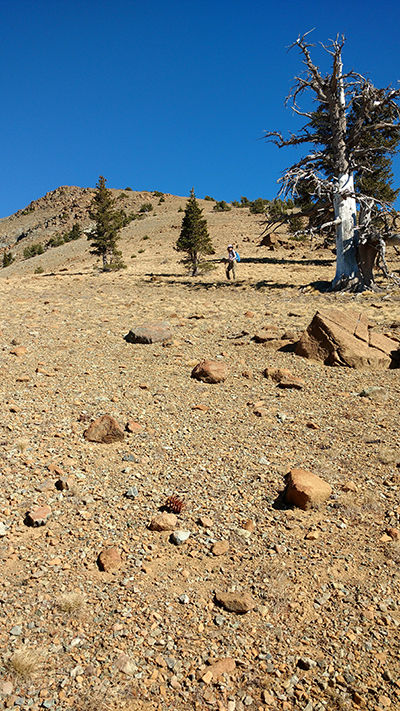 Cathy Anderson on the switchbacks headed for the peak of Mount Eddy.

The view of Mount Shasta from the top of Mount Eddy, Black Butte in the foreground.

Cathy Anderson on the switchbacks headed for the peak of Mount Eddy.

Right around Halloween, the arduous climb to the top of Mount Eddy gets feasible. Not easy — but late enough in the hiking season to avoid heat stroke, early enough to steer clear of hypothermia.

At over 9,000 feet in elevation, the peak of Mount Eddy in the northeastern tip of Trinity County is the highest point in the county and marks the Trinity River headwaters.

A couple of weeks ago with our friend Mike we made our annual attempt on Mount Eddy. Each year is different. Sometimes we get to the top. Sometimes we spend too much time at the lakes along the way. And sometimes the weather doesn’t cooperate; the Halloween formula isn’t really an exact science.

The road did some of the work for us. To get to the trailhead from Weaverville, we drove north on Highway 3 for 49 miles, passing through Trinity Center and Coffee Creek. The highway crosses Tangle Blue Creek, and then we took the next right onto Forest Service Road 17 (It’s known as the IP Road to locals, but it doesn’t really matter because there is no sign). We continued 12.4 miles to the parking area which is across the road from the trailhead at Deadfall Meadows, at 6,436 feet. For an easier hike, there’s a second trailhead further up the road.

From Deadfall Meadows it’s a steady but moderate uphill hike to Middle Deadfall Lake at about 1.75 miles in. This territory has a distinct western feel to it. Mike pointed out sagebrush along the way. The landscape features a variety of pines, and the higher you get the more exposed the hike is and the starker the scenery. It’s actually quite beautiful.

Onward and upward. About 2.75 miles from the trailhead we reached Upper Deadfall Lake, which sits in a bowl below the peak of Mount Eddy. Upper Deadfall does reflections like no other lake, perhaps because it’s protected from wind on several sides by mountains. Rugged foxtail pine trees grow here.

We had lunch at the lake and pondered the last mile to the top of Mount Eddy, which loomed in shades of gray and brown with granite veins. Mount Eddy was named for Olive Paddock Eddy, the first woman to climb Mount Shasta.

On that day Mount Eddy sported just a little patch of snow tucked into a crevasse. We hear it has the start of a snow blanket now.

Feeling pretty good, we decided to go for it.

The trail climbs and hooks around the mountainside, and on this clear day the views on every side became more and more impressive. There are lots of switchbacks allowing for 360 degrees of views — a unique perspective looking down on Castle Crags, Mount Lassen, the Trinity Alps, Marble Mountains and the elusive, ever-retreating top of Mount Eddy. The mile of switchbacks makes the climb doable for us, but we still had to employ the baby steps method toward the end. One hundred steps and rest. Fifty steps and rest. Ten steps and rest.

We came upon a contorted tree or snag for shade here and there amid the scree. Looks like a tough life.

Finally, the summit. Mount Shasta, streaked with snow, came into view. Dominated it, actually. The two peaks are only about 15 miles apart.

The top of Mount Eddy can be so windy you have to lean into the gusts to remain standing. Sometimes it’s shrouded in clouds and you have to wait for breaks to see it. But on this day it was calm and clear.

Having climbed almost 2,600 feet in four miles, we flopped down beside the collapsed wreckage of what was once the Mount Eddy Lookout, a vantage point for fire spotters used in the early 1900s.

We made the return trip to the trailhead on rubbery legs but in about half the time. This generally isn’t the hike for solitude. We ran into a couple of friends and several other groups, collecting some good trail info along the way.

We drove home basking in our accomplishment and quizzing each other on the sights of the day.