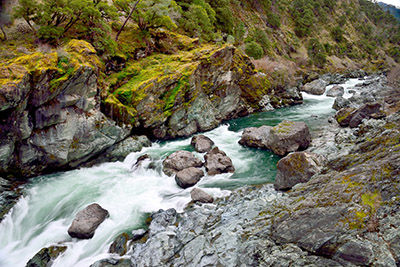 The Burnt Ranch Falls area sports plenty of fungi and lichens, but also can surprise with wildflower blooms. 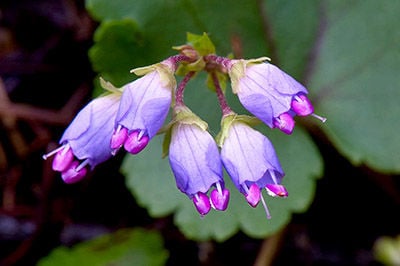 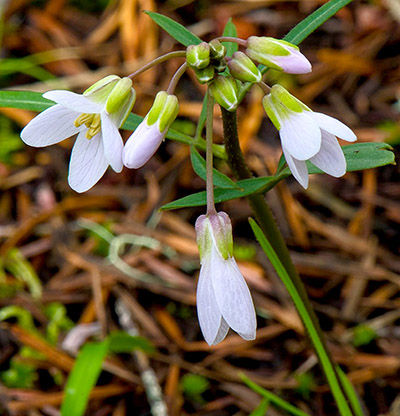 The Burnt Ranch Falls area sports plenty of fungi and lichens, but also can surprise with wildflower blooms.

One of the things I’ve learned about wildflowers in Northern California is that there is NO definitive wildflower season. Unlike other regions where I have photographed wildflowers such as in the Blue Ridge Mountains and in Switzerland where there are typically three definite blooming seasons, around here those rules fly out the window. Around my home in Shasta Lake Milkmaids, Indian warriors, Mosquito bills (shooting stars) and manzanita have all appeared in mid-December and in the Trinity Alps I’ve found billberries, sneezeweed, cinquefoils, and even dogwoods (among others) blooming into late October and early November. There seems to be no rhyme or reason insofar as our local wildflower bloom is concerned so nothing really surprises me anymore.

In mid-February this year I drove downriver to photograph fungi and lichens in the area between Burnt Ranch Falls and the campground which is an area often very rich with both but while there I also found Nuttall’s toothwort, Snow queen and Common chickweed in full bloom. So, even in the mountains of Trinity County the seasons are jumbled.

The secret to finding wildflowers is this: there is NO secret. You just grab your day pack, camera, wildflower guide, some water and snacks and head out the door — preferably with no expectations other than to get some exercise and breathe in some of that fresh Trinity County air.

I suppose I should re-affirm my long-held belief that while you are walking you should spend as much time looking at the ground as you do taking in the scenic vistas. After all — as I point out in my wildflower guide — the grand vistas are ultimately nothing more than a collection of all the little and not-so-little things that surround us each and every day. To that end I am a huge fan of the “mosey” which is sort of like an amble which implies a slowed down version of wandering or wending which further implies being out in the natural world with absolutely NO actual destination in mind and with the possibility of a nap in the sun against the fragrant trunk of a Jeffrey pine or a grassy spot in a meadow somewhere.

Moseying actually gets you up close and personal with your surroundings. Hiking to me means a concerted effort to get to a pre-planned destination and is not necessarily conducive to the close-up observation of the little things around you. With that being said I can honestly say that the attentive “mosier” is more likely to spot the tiny Spring draba, or Popcorn flowers and Canyon nemophila — all of which blend in so nicely with their backgrounds.

For those of you who just want to see lots and lots of wildflowers though, without crawling around in the dirt, rocks and bushes there are alternatives to the aforementioned nose-to-the-ground “mosey.” Lace up your hiking boots and head to the high country between the months of May and September. Specifically, if you are in reasonable shape and steep, somewhat warm climbs, are not particularly intimidating, walk the Stony Ridge Trail to Red Mountain and Van Matre Meadows. This area, in August, is a wildflower lovers paradise and I mean that literally. I visit this trail often and, to date, have photographed 56 species, sub-species and varieties of wildflowers between the Trailhead and Echo Lake. My advice is to leave the trailhead at sunrise and plan on a long day. Because my goal when visiting here is to photograph flowers, I often do not get back to my truck much before dark. I will literally shoot 500 or more photographs on each visit — processing all of them (because I shoot RAW files) can take two or three full days at the computer.

Another destination I want to suggest is Scott Mountain which is, in my book anyway, the epicenter for serpentine loving wildflowers. The area between Tangle Blue Creek on the south, Scott Mountain summit and the Salmon River on the north is so rich that I return there several times each year beginning in May. The variety is absolutely stunning. You don’t have to be in particularly good shape to appreciate this place. You can drive to the summit on Highway 3 and spend time walking around the meadows around the campground and then along the road to Big Carmen Lake. If you are a bit more adventurous you can climb the slopes to the summit of the mountain, but be very attentive as to where you step. There is an amazing variety of exceedingly tiny wildflowers that are almost invisible while walking. One wildflower though will make the trip especially worthwhile and that is the beautiful Falcate onion which can literally bury large areas of open serpentine in an ocean of magenta.

One more destination is worth mentioning and that is the Fen Trail at Kangaroo Lake. This is another area rich in botanical diversity especially highlighting wildflowers that favor serpentine. It happens to be an especially nice area for seeing Cobra plants (Darlingtonia) which inhabit the many fens along the trail. Interpretive signs, located trailside, give walkers a very nice introduction to both the geology and the botany of the area along the Scott Mountain Divide.

Aside from those areas mentioned, backpacking or dayhiking anywhere into the back country will reward the attentive wildflower enthusiast so I encourage you to wander. Wander here, wander there. It really doesn’t make any difference where you go, you will always find something of interest.

Just remember… “All who wander are not lost.” And “No matter where you go, there you are.” Both sayings suggesting that you should not anticipate anything more than the journey, step by step. Discoveries made along the way are reward enough, destinations are ultimately not very important.

Back to Burnt Ranch Falls. I never expected to find wildflowers blooming down in that cold gorge so early in the year; mushrooms yes, wildflowers no. But, this is precisely what I encourage people to do, visit any and all places, even those where you would least expect to discover some wayward bloom and find the unexpected. Discoveries like this are really the heart and soul of any kind of exploration and affirm that one should get out often throughout the year and simply take a very close look around.

Ken DeCamp is the author of “Wildflowers of the Trinity Alps.”