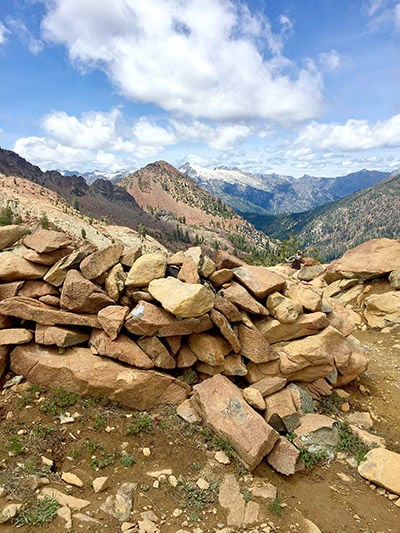 Remnants of the original stone wall in the foreground; the White Trinities in the background. 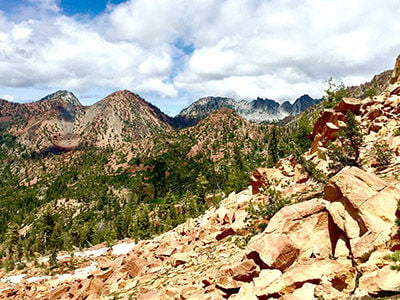 The Red Trinities with Siligo Peak and Gibson Peak behind.

Remnants of the original stone wall in the foreground; the White Trinities in the background.

The Red Trinities with Siligo Peak and Gibson Peak behind.

When I was just a kid, a photo hanging on the wall of a local business caught my eye and my interest. And the image has stuck in my brain all these years. It showed a team of mules and packers headed up the side of a mountain and the photo caption read “Stonewall Pass.”

I was fascinated and remember thinking that getting there would require a level of “adventuresome-ness” that I could never attain – WAAAY out of my league. But I fantasized about it anyway. This was long before my life was filled with hikers and hiking, and 10 years before the Trinity Alps Wilderness was designated a wilderness.

Thirty-something years later, when I finally took up hiking, I was studying a map and there screaming out at me were the words “Stonewall Pass.” That long-ago photo and the feelings it evoked all rushed back into my head and my heart. OMG! I couldn’t believe there was actually a trail and that I could hike to it.

The first time I hiked to the pass I had no idea what to expect; the photo etched in my memory was of hikers and mules trudging up the side of the mountain so all I knew is that it would be steep. You don’t see the peaks, or get any hint of them until you walk around the remnants of the stone wall at the very top and then WOW! It is stunning.

Over the last several years I’ve hiked up to the pass at least 20 times, and each time I am still stunned. My first time up I was a beginning hiker and had no idea Trinity County had anything like those mountains and peaks. I was in awe and inspired by the hiking possibilities. Since then I’ve gotten quite a few miles under my boots and recognize the peaks and valleys as places I’ve explored. This makes it even more special.

So let me introduce you to these peaks…

Stonewall Pass (7,400’) spans the space between Red Mountain (7,928’) and Middle Peak (8,095’).  There still remains a section of stone wall which is shown in one of the photos here. In the top photo the red slope coming down from the left is actually the side of Red Mountain and includes the red-mini-peak toward the middle of the picture. The lush green space straight down below your feet when standing on the pass is Van Matre Meadows. The meadows were historically used for grazing (thus the stone wall).  The camera is not pointing downward enough for the meadows to be visible in this photo.

The string of granite mountains in the background are part of the “White Trinities,” so named because of the white look of the granite. On the far left side of the picture, barely peaking above the shoulder of Red Mountain, is Little Granite Peak (8,031’). This is the peak-buddy of beautiful Alpine Lake. Showing just to the right of the red-mini-peak is Sawtooth Mountain (8,886’) looking like, well, a saw tooth.

Hopefully from the photo you get a sense that Red Mountain and Van Matre Meadows are on one side of a deep valley and the White Trinities are on the opposite side.  That deep valley is Stuart Fork drainage and home to Morris Meadow. Toward the right of the photo, if you squint just so, you can see the valley bending away from the viewer. At the top of the bent-away valley (but with elevations low enough that they are out of view from Stonewall Pass) Emerald Lake and Sapphire Lake are nestled below Thompson Peak (9,002’) and Caesar’s Cap (8,928’).

The other photo, taken from the same spot as the first, picks up where the right edge of the first photo leaves off. These mountains including Red Mountain are called the Red Trinities. Again, down below your feet are the Van Matre Meadows. About a fifth of the way over from the left edge of the photo is a slightly crooked granite peak with rounded top (just behind the red ridge). This rounded-top mountain is Siligo (sill-uh-go) Peak (8,162’).  If you made a little jaunt around Siligo Peak and stayed at an elevation of around 7,000’, you would have just done what is called the Four Lakes Loop.

Toward the right of the photo there is a jagged, horizontal-ish granite ridge behind the unnamed red peaks. This ridge is Gibson Peak (8,400’). If I were queen of the world, I would have named it Gibson Ridge instead of Gibson Peak. If you had magic eyes and could see through Gibson Peak, just on the other side you would see the overly popular, ridiculously crowded Granite Lake.

It’s hard to pick the details out in photos. There’s so much more to see. I suggest you hike up there with a map and compass and orient yourself. Then go explore all the places you can see.

i know the mule photo of which she speaks. The humans associated with it were Roger Adrian (former county supervisor, former owner of The Diggins) and Gerard Kaz (former co-owner of The Brewery, a restaurant on the site of the historic weaverville brewery, and WFD captain). They were ~recent heroic figures.