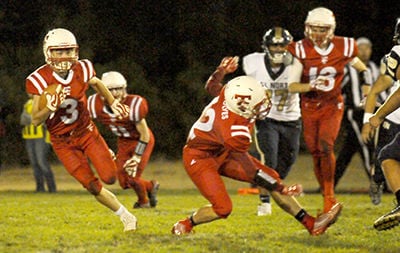 Trinity’s Kolby Demello (No. 3) sweeps around the right side during first-half action Friday during the Wolves’ Homecoming game with Del Norte. Blocking is Forrest Wetterstrom. 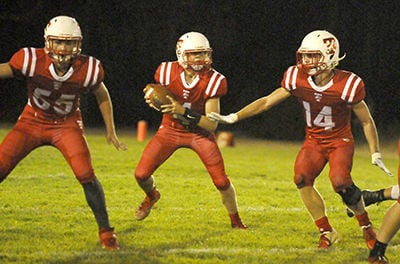 Quarterback Levi Hubbard (No. 4) drops back to pass Friday night while protected by Ian Bradford (No. 55) and Scott Rupp. Hubbard eventually had nowhere to throw the ball and ended up having to scramble.

Trinity’s Kolby Demello (No. 3) sweeps around the right side during first-half action Friday during the Wolves’ Homecoming game with Del Norte. Blocking is Forrest Wetterstrom.

Quarterback Levi Hubbard (No. 4) drops back to pass Friday night while protected by Ian Bradford (No. 55) and Scott Rupp. Hubbard eventually had nowhere to throw the ball and ended up having to scramble.

The Wolves gave up 267 yards and three touchdowns on the ground and an additional 173 yards and four touchdowns through the air. No Trinity stats were available at press time.

The Wolves (0-5) begin league play at home this Friday.

In a battle to stay undefeated and for first place in the California-North 8-Man League, the Timberjacks lost 47-30 at Tulelake on Friday, Oct. 4.

“For as well as we played last week at home in our win against Big Valley,” coach Mike Miller said, “we came up flat in our effort against Tulelake.”

Tulelake scored first on a long TD pass at the end of the first quarter. Martin Carini blocked the PAT attempt and Tulelake led 6-0. Hayfork (4-1, 2-1) responded with a 6-yard TD run by Will Kasper. Nathan Williams ran in the 2-point conversion making the score 8-6.

At the end of the half, Hayfork had a long drive eating up half of the second quarter. After reaching the Tulelake 15-yard line Kasper threw an interception to end the half. This was the turning point in the game as Hayfork had a chance to go up by two scores, but Tulelake grabbed the momentum going into the third quarter.

On offense, Will Kasper carried the ball 25 times for 173 yards and two touchdowns. He had 152 yards rushing in the first half. He also completed 5 of 8 passes for 82 yards with one touchdown pass and two interceptions.

On defense, there were only a few bright spots. Vrai Coty had seven solo tackles and four assists including two sacks. Mummy scored a TD on the interception return and Carini blocked two extra points.

“We definitely were not focused, and it showed as we had 13 penalties for 90 yards including seven offsides penalties,” Miller said. “We did not have a good week of practice and we did not play with intensity like we did against Big Valley.”

Hayfork will have its Homecoming this Friday night at 6 p.m. against Happy Camp. The king and queen coronation will take place after the football game.

Trinity fell behind 3-0 at halftime and were outscored 5-1 in the second period.

Trinity returned from the Capital Cross Challenge in Sacramento Saturday, Sept. 28, with a near complete list of significant PRs. The Varsity 5k course and Frosh/Soph 2-mile course at the Arcade Creek Cross-Country Course was covered by 110 high school teams from California, Nevada and Washington and each race had many hundreds of athletes competing.

On the girls side, Lindi Brookins was the sole varsity racer and brought her time down 3 minutes from her prior season times. The frosh/soph duo was led by Dagan Fox, and both she and Jo Brookins placed in the top half of their event racers.

The next meet is today, Oct. 9, the Mountain Madness Run in Etna.