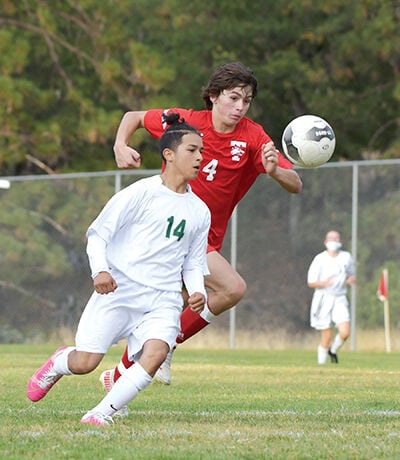 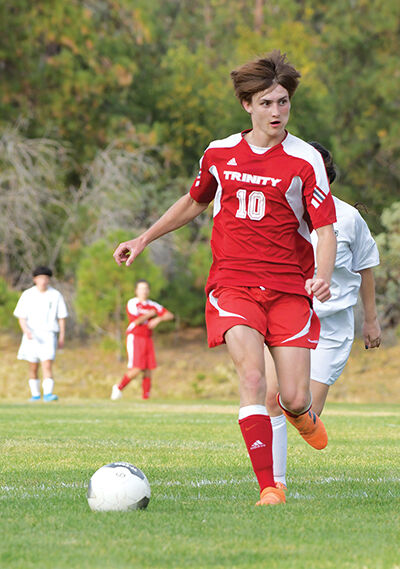 Trinity's Autrin Peralta eyes his next move as Trinity drives down the field during Thursday evening's soccer match vs. Weed at Trinity High School. 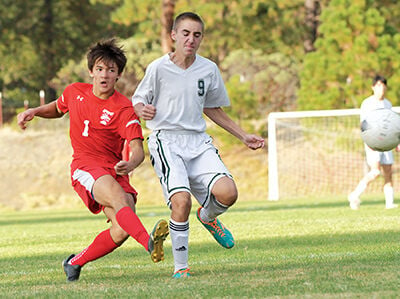 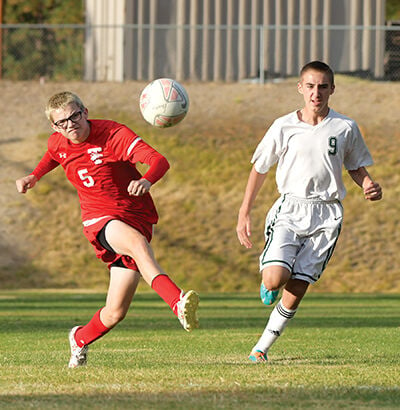 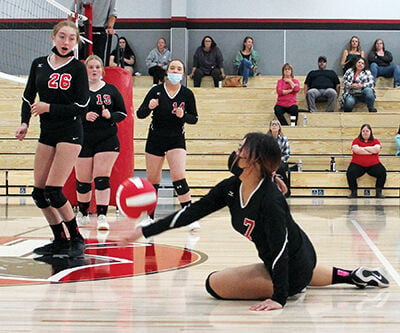 Hayfork junior Kimberly Lo dives in for a one-arm save against Dunsmuir Thursday, Oct. 7, at Hayfork High School.

Trinity's Autrin Peralta eyes his next move as Trinity drives down the field during Thursday evening's soccer match vs. Weed at Trinity High School.

Hayfork junior Kimberly Lo dives in for a one-arm save against Dunsmuir Thursday, Oct. 7, at Hayfork High School.

The Wolves soccer team posted a solid league win over the visiting Weed Cougars Thursday, Oct. 7, playing their way to a 5-2 victory. The Peralta brothers, Autrin and Auryn, again powered the offense, scoring multiple goals each. The Wolves will look to the brothers to spark the offense again later this week when they host Tulelake and Modoc. Trinity was at Fall River Tuesday.

The Lady Wolves continued their dominance of the Shasta Cascade League last week, winning home games against Mount Shasta and Weed, both by 3-0 scores.

Junior Brynn Scribner was the star of the show yet again in the Mount Shasta game Tuesday, Oct. 5, leading the way in kills, aces and digs. The team’s two sophomores made their presence known, with Chloe Albiez leading the team in blocks, and Gwen Hansen leading in assists.

The Weed Cougars gave the Wolfpack a little scare at first On Thursday, Oct. 7, making Trinity work for a 29-27 victory. After that the Wolves seemed to settle in and play a much tighter game, winning the next two sets 25-12 and 25-19 for the 3-0 sweep. This game was more of a team effort, with junior Jocelyn Brown setting the high water mark for aces this time around, and Albiez leading the pack in digs.

The Wolves (16-7, 7-0) have only three games left before playoffs, at Fall River, vs. Modoc and vs. Etna, and have beat all these teams at least once before. Look for the Trinity Wolves volleyball team to remain undefeated going into the postseason.

For the first few drives Friday night, Oct. 8, it looked as if the Trinity Wolves football team was going to take down the league’s best team, the Modoc Braves. Getting the ball first, Trinity marched downfield and scored, almost effortlessly. Following the touchdown, they were able to stymie the vaunted Modoc Wing-T, silencing a crowd that was quite raucous leading up to kickoff.

Once again on offense, the Wolves moved the ball successfully downfield, until they didn’t. An errant snap that sailed over the quarterback’s head put Trinity behind the sticks, and the momentum seemed forever changed after that. Trinity wouldn’t find the end zone for the remainder of the game, and would wind up dropping their league opener 26-7.

This seems to be a recurring issue for the Wolves, they’ll look good for stretches of the game, but once the mojo runs out, they have a difficult time finding it again. Perhaps the Homecoming festivities will help the Wolves (1-4, 0-1) find their mojo, as they face Hamilton this Friday in front of a likely packed Mike Polka Field crowd.

The cross-country team made their way to Cottonwood on Friday, Oct. 8, for the West Valley Coed Invitational, and it turned out to be a successful meet for Trinity.

In the varsity boys 3-mile, two Wolves placed within the top 25 — junior Kyle Cox in 12th place and junior Anthony Rist in 24th. Aubrey Prunty continued to be the stand-out female runner on the team, placing 17th in the varsity girls 3-mile.

The Timberjacks were on the road at Beiber Thursday night, Oct. 7, and lost 36-8 to the Big Valley Cardinals.

“For as well as we played last week against Westwood, it was the exact opposite last night,” coach Mike Miller said.

“We constantly made mistakes and couldn’t get out of our own way. We had 13 offensive possessions and we took nine of the 13 inside the Big Valley 40-yard line and came away with a total of 8 points. Bad snaps, turnovers and mental mistakes cost us a chance of winning the game.”

On the very first possession of the game the Timberjacks put the ball on the ground three times in four plays. A bad snap on the punt gave Big Valley the ball at the Jacks’ 5-yard line, which they quickly turned into TD for a quick 8-0 lead.

Hayfork fought back with a long drive, finishing with a Dakota Mummy QB sneak. Mummy also ran in the 2-point conversion to tie the game at 8.

Big Valley finished the half with a 50-yard TD run making the halftime score 16-8 in favor of the Cardinals.

In the 3rd quarter it was more of the same. Three offensive drives stalled inside the Big Valley 40-yard line, and the Cardinals had two TD passes of 40 yards and 25 yards bringing the score at the end of the third quarter to 30-8. Big Valley finished the game with a 65-yard run and the final score was 36-8.

The total offense between the two teams was almost even. Hayfork had about 270 yards rushing, but only had 8 points to show for it. Noah Fielding had 150 yards rushing on 30 carries. He also had a 95-yard kickoff return for a TD called back due to a clipping penalty. Devin Nanez carried the ball 18 times for 65 yards, and Dakota Mummy had 41 yards on 14 carries with a TD.

Defensively, Nanez had an interception, Fielding had a forced fumble and Mummy and Andy Yang each had a sack.

“It was a rough night considering we controlled the ball and had about twice as many offensive plays as Big Valley did,” Miller said.

“We found ways all night to make mistakes, and give Big Valley big plays. We need to be more focused and pick up our intensity.”

“Hopefully, we can make some adjustments, and get back on track,” Miller said.