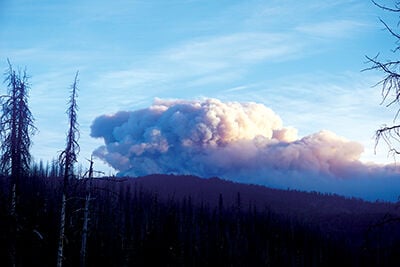 Smoke billows from the Hopkins fire late last week. The fire has since been absorbed into the August Complex, which was at 794,801 acres as of mid-day Tuesday. 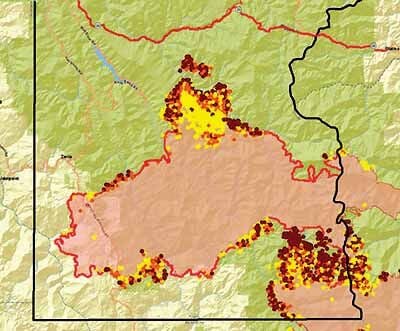 With the Trinity County line highlighted in black and Ruth Lake in the upper-lefthand corner, it’s easy to see how much of Southern Trinity County has been destroyed by the August Complex. Dark red dots on this NWCG map show the most recent fire starts as of Tuesday.

Smoke billows from the Hopkins fire late last week. The fire has since been absorbed into the August Complex, which was at 794,801 acres as of mid-day Tuesday.

With the Trinity County line highlighted in black and Ruth Lake in the upper-lefthand corner, it’s easy to see how much of Southern Trinity County has been destroyed by the August Complex. Dark red dots on this NWCG map show the most recent fire starts as of Tuesday.

As of Tuesday, the largest wildfire event in recorded California history, the August Complex, which has joined the Elkhorn and Hopkins fires, is edging its way toward Zenia. The fire has already burned a significant portion of the most remote areas of Southern Trinity County.

The Trinity County Sheriff’s Office issued an update Monday, saying fire in the Forrest Glen area is imminent and under evacuation orders. The order called for the evacuation of Trinity Pines and Post Mountain, located just over Highway 36 from the fire.

Tuesday morning, staff at the August Complex information center said the fire perimeter was just over 3.5 miles from Zenia.

Sue Exline, an information officer on the August Complex, said Monday that personnel were going into the area to assess impacts. The NWCG map shows the edge of the fire to almost cross the spot where the Kettenpom Store and Kettenpom Fire Department are located, at the intersection of Zenia Lake Mountain Road and Peak Road.

The distance from the Kettenpom Store was said to be 260 feet, but staff said the fire has not moved in the area for the last few days.

Store owner Marina Cheney confirmed Tuesday afternoon that the store, which provides goods to residents for miles around, was spared from the fire, along with the neighboring fire station.

“Yes, fire was within 200 feet of both. So far both have been saved. The wind and conditions have been in our favor. Everyone is working so hard to keep us all safe,” she said. “We are so grateful for all the support we have received!”

According to a report from the August Complex North Zone, crews are working to secure the north and northwest areas of the fire, along the South Fork of the Trinity River and south of Rattlesnake Ridge.

According to the Forest Service north and south zones of the August Complex are expected to merge in the YollaBolly-Middle Eel Wilderness along Wright’s Ridge, making it unsafe to deploy fire personnel there.

Exline estimated that to drive around the entire August Complex would cover over 500 miles.

According to the U.S. Forest Service, the complex has burned 794,801 acres, destroyed 35 structures, caused 11 injuries and 1 fatality, and is 30 percent contained as of Tuesday. The fire was caused by lightning and has been burning since Aug. 17.

Closures of national forests will remain in place until Sept. 21.

Discovered Monday afternoon, the Fox fire, burning southwest of Callahan, in Siskiyou County, continues to burn areas around Fox Lake. As of Tuesday morning, no estimates of acreage or containment had been given.

Fires in Northern California have triggered many air quality advisories that change regularly as winds shift. However, according to the North Coast Unified Air Quality Management District, smoke levels in Weaverville and Trinity Center were considered unhealthy as of Tuesday morning. Areas north of the August Complex including Hayfork, Zenia, Kettenpom, Trinity Pines and Ruth ranged from unhealthy to very unhealthy Tuesday morning. People with underlying health and breathing conditions are advised to avoid outdoor exertion in unhealthy conditions, while a rating of very unhealthy advises all people to avoid outdoor exertion. The only higher level is “hazardous,” meaning people should avoid outdoor activity altogether.

The National Weather Service in Redding predict that temperatures will come down to the low 80s with a slight chance of rain showers Thursday and Friday for the Weaverville area and farther south.