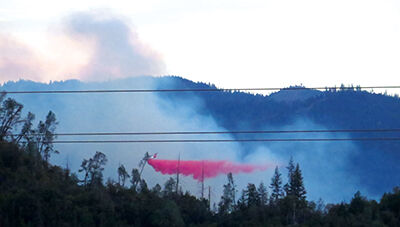 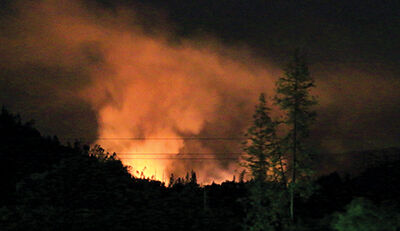 On the Monument fire, Operations Section Chief Mark LaMont said Monday morning that work continues around Denny Road and the Hoboken area, where crews have repaired some areas damaged by fire suppression. To the south, crews were able to add more containment line to the fire map. Suppression repair is nearly done in the Hobo Gulch area and chipping operations were expected to go into Wednesday, he said.

Into the Junction City area, no fires were threatening to cross fire lines and crews were working to remove hazardous trees near roadways and utilities.

On the south end of the fire line, a lot of work remains, LaMont said, with suppression repair reaching around to Hyampom Road.

The only part of the fire map without containment line lies at the northernmost points, but officials say the fire is moving into previous year burn scars and rocky terrain.

“We flew it yesterday and did not see any significant movement,” LaMont said. “We still have some heat up in there, but [saw] nothing we are concerned about.” He said officials do not believe the fire will continue to advance north.

Nevada Incident Management Team Operations Section Chief Kelly Harper said Monday that while crews are monitoring most areas of the River Complex, one fire on the east edge was putting up smoke Sunday.

“We’re using hand crews to extinguish that where possible,” she said, “and [using] air support if needed.”

Fire activity increased in a bowl near the Sugar Pine area, as fire activity pushed smoke toward Trinity Center over the weekend. Harper said officials were developing a plan Monday morning to get Hot Shot fire crews into the area and support them with air resources.

The south end of the fire was unstaffed over the weekend, but was being monitored by aircraft.

Harper said there are no areas of concern from the southwest side of the fire to Callahan, and crews are monitoring fire activity as they complete suppression repair in those areas. The Cronan fire, one of three in the complex, remains cold and suppression repair is taking place there.

A supply camp at Junction City Fire Department has been getting smaller every day for the past couple of weeks.

Fire officials are saying a fire that started between Junction City and Douglas City last week was not a flareup on the Monument fire, but a new incident. According to Cal Fire, the Maxwell fire started on Oct. 5 near Maxwell Creek Road, west of Douglas City. Though the fire is shown to be at the easternmost point of the Monument fire, Cal Fire is treating it as a new blaze.

“Initially acreage of the Maxwell fire was included in the Monument fire, but the Maxwell fire is a separate fire and is being managed by Cal Fire,” a Shasta-Trinity National Forest report said Friday.

Smoke and planes could be seen from Highway 299 near Junction City, dumping water and retardant on the fire Tuesday evening. As of Thursday, it was said to be 20 percent contained and its cause unknown. By Monday morning, containment was estimated at 90 percent.