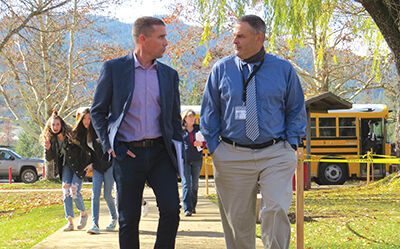 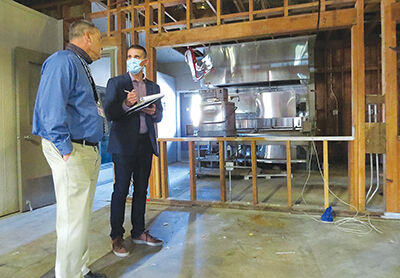 McGuire opened by telling the class a bit about himself, that he grew up poor in a divorced family, but learned to work hard, work together and never take no for an answer when it comes to the issues one believes in. He said he attended a high school in cold classrooms due to a broken boiler where garbage cans were used to catch dripping rainwater. He called it frustrating that adults expect so much of students but at times, place them in situations where it will be difficult to learn and succeed.

“I ran for school board when I was 19,” he said. “and I heard ‘no’ all the time because I was running against people my grandparents’ age.” He said he felt the board at the time didn’t seem to care about the district when he was elected to the board and four years later, he was part of passing a bond to rebuild his schools.

“Right now, in this time in our history, there is no better opportunity for each and every one of you to be able to step up, whether it’s looking at the county, focusing on the school board or getting involved here in Trinity County. It is time,” he told the students. “I’m also hoping this pandemic will teach us new ways to be able to work, and for you to bring us a fresh perspective because that’s what it’s going to take – people stepping up right now.” McGuire said that while he never expected to be in the state Senate, he struggled to get there by putting himself through college.

Students expressed frustration at the difficulties of the past couple years, from the pandemic, to cancellation of sports, impacts on local businesses, inflation, continuing mold repair, fire-related issues and more. McGuire agreed.

“It really feels like things have just broken down,” he said of government, supplies, hospital issues and more. “And it’s not expected to return to normal for another year.”

Mr. Anderson chimed in, adding that it seems like America changed in a similar fashion as it did Sept. 11, 2001.

“America has changed the way it operates day-to-day,” he told McGuire, “So it’s interesting to explain to them that they are living in a period that’s going to be historical. That hit me in the way I remember 9/11 was very altering in the way we viewed America and the world.”

“Where I’m also concerned is that in the beginning of the pandemic, everyone was kinda working together and I feel like during the pandemic and now that we are on the other side, we are growing further apart, and I have some real concern about that. Not just here in California, but throughout the nation.”

One student noted that while the pandemic has affected the world for 16 months, but THS students have been in portable classrooms for three years as mold repairs are being done, and then COVID disrupted sports and everything else.

“We haven’t had a normal year since our freshman year,” she said,

“All you want is normalcy — to be able to do the things you have been looking forward to in high school, right?” McGuire replied, noting the additional complications of local wildfires.

After explaining the breakdown of his district and the Senate, McGuire said that while he’s a democrat, representing a rural district, he’s also tired of the political labeling and name calling.

“I’m a firm believer that one of the reasons President Trump was elected was that Democrats have forgotten about rural America,” he said, noting that rural areas rank highest in homelessness, opioid addiction and housing shortages. “It’s not in big cities, it’s in rural America.”

Noting that Humboldt County has some of the highest homeless rates in the country and Mendocino has the country’s highest unsheltered homeless rate, McGuire stressed a need to focus on rural California issues.

“I don’t know about you but I feel, at times, that California has forgotten about us,” he said, “and it’s simply unacceptable.” He said the partisan infighting is counterproductive and other countries see it as an American vulnerability.

On the topic that nearly dominated the rest of the discussion, McGuire noted that so many Californians are tired of COVID, masks, the pandemic, being financially impacted and want things back to pre-COVID normal.

“And, let’s be honest, Americans don’t necessarily like being told what to do,” he said. “Even though we may think, ‘I’m going to do it,’ we don’t like being mandated to do it. I get it.”

McGuire said he’s been informed by medical professionals that a fifth wave will hit after the holidays, but will not be as severe as last years’ due to the number of vaccinated people in the U.S.

“The only way we are going to get out of this circling of the drain of the pandemic is inoculation,” he said slowly. “It’s the only way. What I am really worried about is what will be the next strain after Delta. If we mess around with this thing too long, that next strain will hit us and we know that history will repeat itself.” McGuire said 15 percent of new cases are hitting those 17 and under, and the numbers are rising for students.

McGuire explained that any school mandate will not go into effect until six months after the U.S. Food and Drug Administration approves a vaccine, and on Pfizer currently has emergency use authorization. July 2022 would be the earliest date a mandate could go into effect and would depend on FDA approval for those under 17, he said.

McGuire told students that vaccination, masks and distance are the only way to protect themselves and each other from infection and complications of COVID.

Asked if one can still contract COVID while vaccinated, McGuire said yes, adding that the vaccines don’t prevent contraction, but help to prevent serious illness, hospitalization and death. He said correlations show a plummeting death rate since the vaccine was introduced.

He said later that while California has a 73 percent vaccination rate, some states remain in the 40 percent range, ensuring the virus will spread and mutate into a new and more vaccine resistant strain. Noting the list of diseases for which kids are already vaccinated to be in schools, McGuire stressed that while vaccines work, no vaccine works 100 percent of the time.

“Breakthrough cases (while vaccinated) are less than 10 percent,” he said. “If you’re taking the vaccine to think you’re never going to get COVID, that’s the wrong reason to take it,” he said. “If you are taking the vaccine to stay out of the hospital and not go onto a breathing apparatus in the ICU, or to stay alive, that’s why you should take it.”

Asked if the messages of mask and vaccine mandate protests have reached legislators in Sacramento, McGuire said, “absolutely.”

After a bit of discussion on COVID, politics and how the two have intermixed, McGuire took a group photo with the class and toured areas of the campus still under construction with Supt. Jaime Green.