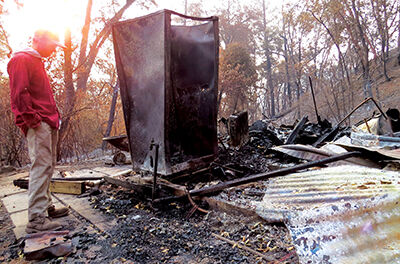 Tilhgman Myers stands next to the remains of one of eight cabins destroyed by fire. 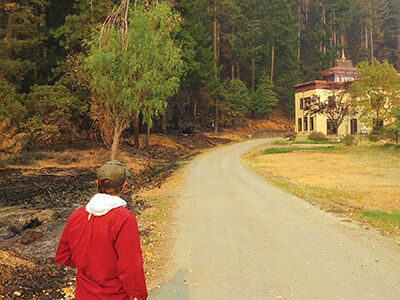 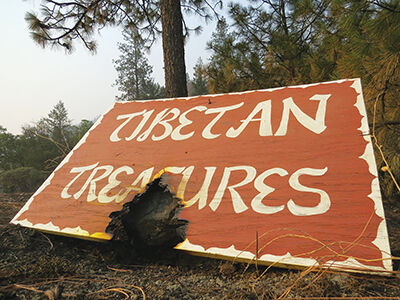 Tilhgman Myers stands next to the remains of one of eight cabins destroyed by fire.

Staff at the Chagdud Gonpa in Junction City expressed gratitude, a little remorse and some hopefulness that rebuilding will bring improvements to the water system and surrounding forestland.

Spiritual Director Lama Padma wanted to thank all fire personnel who worked before, during and after the fire went through the area.

On Aug. 15, fire crested the hills near Junction City. The following day, it blew into the area of Dutch Creek and Red Hill roads, before jumping the Trinity River and almost reaching Highway 299. The fire destroyed eight retreat cabins and two yurts but also burned around a small shrine in the trees and a brick bread oven near the main building at the Chagdud Gonpa.

Lama Padma said the efforts of all fire crews resulted in the saving of the main living quarters and the center’s main building, which is the heart of its activities. Facilities Manager Tilghman Myers said, “Our buildings are intact because of them, and we want to make sure we communicate how grateful we are to the crews.”

On Aug. 22, Lama Padma released information that the area of the dams had burned over and damaged the entire water system. That system also supplied water to the Junction City Fire Department, the Community Center and the Forest Service office. When the fire progressed down the drainage behind the Gonpa, it damaged the system, stopping the water supply. It also disabled a hydrant on the Gonpa property which fire departments had been allowed to use to refill fire engines and water tenders.

Lama Padma expressed some remorse that the system was down when fire personnel needed it.

“I realize that during the fire, we were not able to supply water because the creek was obstructed,” he said. “We want to be a part of the community as much as we are able because we care and want to contribute. Water was one of the ways we could do that.” Lama Padma said that during the Helena fire, engines and tenders continued to cycle through the Gonpa for months, refilling so they could continue working.

“We are trying to get that going again as soon as possible,” he said.

“One of our main motivations for getting the water back is so we can help get water to the hydrant,” Myers said.

The system has two water sources on different levels along the nearby hills, with the main supply coming from the upper source.

“The whole system was wrecked,” Myers said last week, noting that trees had fallen on much of it while erosion pushed the main water line out of place and moved the trail aside.

Part of the system was repaired enough last week to supply water to the center. Myers said water was restored to the creek house building thanks to a makeshift water intake constructed there. He said the trail to the upper dam was precarious before but is worse now.

Todd Watkins, owner of Watkins Tree Service, was to come out and clear the trees that had damaged the system to allow for a better assessment.

“It’s all dependent on getting the main water system back in order,” Myers said, estimating that it could be a couple months before the Gonpa can resume normal operations. He said the site needs to be cleared and an assessment made because it’s currently unknown what it will cost to repair.

However, the damage gives the opportunity to build a more robust system that will withstand future fire and weather events in order to provide a more dependable source of water, he said.

Myers also said area fuels were reduced greatly, allowing for easier clearing of the area. He said staff can now also look at ways to improve and manage erosion and fire fuels on the 250-acre site.

While the main residential building had functioning sprinklers mounted to the roof, the main building did not. However, firefighters placed and connected a rotating water cannon behind the building that sprayed into the woods.

“You can see a 50-foot ring of green where the fire was stopped,” Myers said. He noted the fire happened soon after supplies were purchased to build a suppression system.

While touring the remains of the cabins, Meyers said it’s not yet known how long it will take to rebuild them, when it will start or what it will cost. He said the priority will be cleaning up the cabin sites, but staff is waiting to hear recommendations as to hazardous materials that may need cleanup.

“Tibetan Treasures is the primary funding,” he said, “so if that had gone, a lot of items would have been destroyed, so I don’t know what that would have meant for us.”

Myers said the Gonpa is under the umbrella of the Chagdud Gonpa Foundation, which has several centers and may provide some financial assistance.

The public is still welcome to visit the Gonpa but are advised not to enter fire-damaged areas due to safety concerns.

Go online to https://chagdudgonpa.org/ for information or to offer assistance.