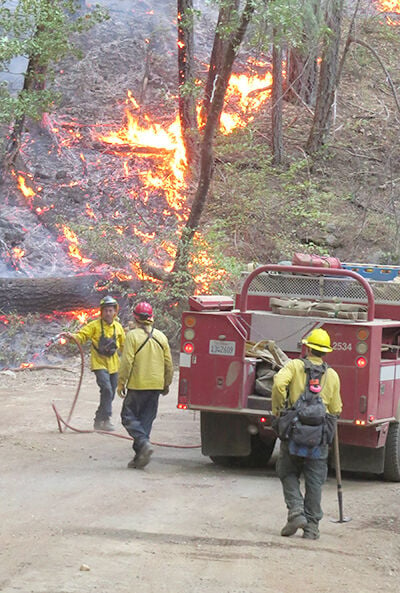 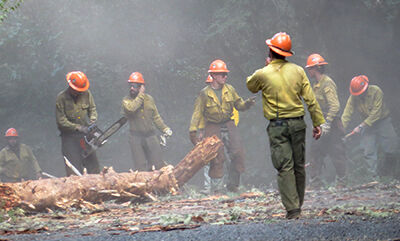 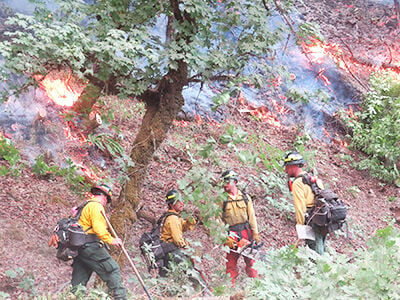 Firefighters battle the Hobo fire near Helena. By Monday the 413-acre blaze had been 90 percent contained. Additional photos on www.trinityjournal.com. 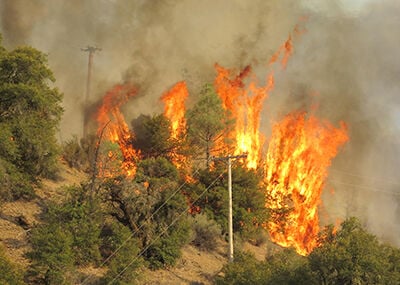 Firefighters battle the Hobo fire near Helena. By Monday the 413-acre blaze had been 90 percent contained. Additional photos on www.trinityjournal.com.

After a week of fighting it from the ground and air, firefighters from around the region reached 90 percent containment of the Hobo fire, which burned 413 acres of steep wildland north of Helena.

The fire was first detected at 2:30 a.m. Sept. 1, near Barney Gulch. In a day it grew to 50 acres, bringing crews and personnel from around the region, as well as local volunteer departments. The fire area was accessible only by East Fork Road, and an incident command center was set up at the end of the pavement where East Fork and Hobo Gulch meet.

By Sept. 2 the fire had ballooned to 400 acres, creating an inversion area over the fire. Inversions occur when cooler air is trapped under warmer air, which often keeps smoke from dispersing. Incident Commander Tim Ritchey with the U.S. Forest Service, said while inversions typically slow a fire’s growth, they also make it unsafe for aircraft to fly over the fire area.

The following day, the fire didn’t move much, staying in its own footprint for the most part, Ritchey explained. At the time, the fire was said to be 10 percent contained.

One firefighter was injured but was later released from the hospital.

On Sept. 4, the Forest Service updated its size estimate from 450 acres to 412 acres, due to improved mapping information.

Over the weekend, more resources came to work on the fire and a base camp was set up off Sky Ranch Road in Junction City. As of Monday morning, the fire had only increased by one acre, and was said to be 60 percent contained. Ritchey said firefighters were expecting to achieve further containment and evacuation orders for area residents were lifted Monday. Some crews and equipment were reportedly breaking down and heading to other fires in the state.

Ritchey said that because of an impending red flag weather warning, crews planned to leave hoses and equipment in the area while monitoring hot areas. He said if all goes well, crews could begin hauling out of the area by Thursday.

By Monday night, a release from Shasta Trinity National Forest said the fire was 90 percent contained.

“During the day yesterday, the fire showed minimal activity, staying within control lines,” the release stated. “Today firefighters will continue to drop trees that pose a threat for fire spread and safety. Mop up operations will continue including preparation for the predicted Red Flag Warning through Wednesday morning. Fire is expected to stay inside containment lines, with smoldering continuing within the perimeter.”

Winds and dry conditions rolled in Tuesday morning and continued through the day. Asked if it complicates matters for the Hobo fire, Ritchey said whenever there are high winds and low humidity, it can challenge even the most secure fire site. He said crews remained on scene Tuesday to monitor fire lines.