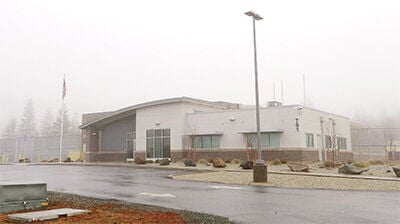 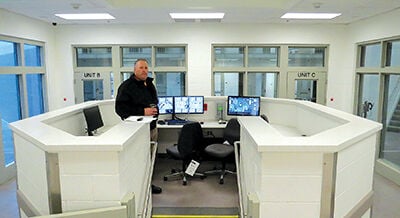 Undersheriff Brian Ward stands in the control station where guards will be able to see into all four general population wings and the outdoor recreation area from the central location. At top, The new jail needs only a few installations to be complete and operational. Compared to what the county has been using for decades, the new facility is state of the art, promising to be safer and more efficient. 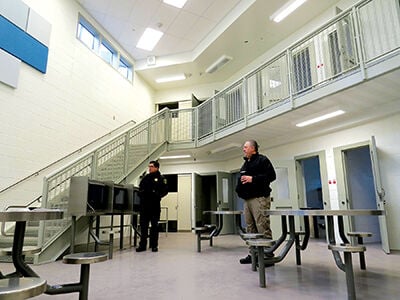 Sheriff Tim Saxon and Undersheriff Brian Ward stand in one of the general population wings. 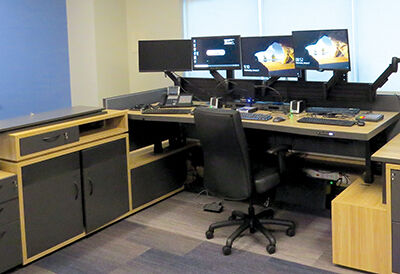 One of two stations in the new dispatch office features a raisable desk, a new computer system, better lighting and many other features superior to the current system.

Undersheriff Brian Ward stands in the control station where guards will be able to see into all four general population wings and the outdoor recreation area from the central location. At top, The new jail needs only a few installations to be complete and operational. Compared to what the county has been using for decades, the new facility is state of the art, promising to be safer and more efficient.

Sheriff Tim Saxon and Undersheriff Brian Ward stand in one of the general population wings.

One of two stations in the new dispatch office features a raisable desk, a new computer system, better lighting and many other features superior to the current system.

Standing inside the general population area of the mostly completed jail in Weaverville, Sheriff Tim Saxon wanted to dispel a rumor he’s heard over and over.

“The facility is not open at this time, but it is not because of staffing,” he said. “That’s the rumor that is going around and we keep hearing it over and over again. It’s not a staffing issue, it’s just the internal finishing of the facility that we are working on right now. As soon as we can get those issues completed, we are ready to train [staff] and get this facility open.”

While Saxon said the building is essentially complete, Ward added that some subcontractor work still needs to be done to ensure phones, radios and other communication equipment are calibrated and tested.

“We’re waiting for some work to be done on the lines coming in to get those operational,” he said. “Then, we have additional contractors that need to get work done on the monitoring system we’re putting in.” Ward noted that the facility’s medical room is also not complete and needs things like examination lighting and other equipment before it can be used.

Undersheriff Brian Ward explained that opening the new jail involves timing of remaining work on the facility and training of new staff. He said the Sheriff’s Office wants to be sure new employees can go directly from training to work, rather than waiting for possibly weeks, due to an unforeseen construction delay.

Ward said COVID played a part in delays in the same way it’s affected many businesses that rely on parts and equipment being shipped in.

“COVID hit during the construction,” he said. “Everyone’s had these issues with delays in equipment from the manufacturer. Fortunately, I think we are over that hump now, so we’ll see.”

Groundbreaking for the facility took place in June 2019 and was slated as a $20 million project. Saxon said that to date, all costs have come in under budget.

Dispatchers have always coordinated fire, medical and law enforcement personnel out of the current jail facility but will move into a state-of-the art facility with better lighting, air conditioning built into the stations, and a new computer system that will keep them more apprised of what is happening in the field.

A conference room inside the jail features a very large touch-screen that will allow emergency personnel to better map and plan during emergencies such as wildfire, storms or natural disasters.

While the full kitchen was written out of the original budget, the facility’s large, sanitary serving kitchen can store basics, clean dishes and serving trays, and maintain the temperatures of food that will be cooked at the old facility.

Rather than continuing to conduct cell and facility checks with a clipboard and a checklist, correctional staff will now be able to log and record data electronically, informing control staff of the location and status of everyone on the building in real time.

The outdoor area recreation area features tall walls with a heavy screen over the top. Since the current jail is located next to a hill, people have attempted to throw contraband and prohibited items over the wall. Ward explained that not only will the net prevent that, but the new outdoor area is located inside a secure perimeter.

The new facility has a secured parking area for staff rather than the open parking at the current jail, as well as a break room and secure bathrooms.

In the lobby, video visiting booths will allow live communication between inmates and the public. Ward said the system will also be accessible online but warned that all correspondence will be monitored and recorded.

A new system will allow friends and family of inmates to deposit money directly into their commissary accounts, taking the responsibility away from correctional staff.

A new control room will allow central command of all doors, cameras and Sally ports (the garage where sheriff vehicles unload inmates at the jail). Ward said it increases security at the facility, as no single employee will have keys to all doors, reducing the risk that an inmate could take them. If a threat is present, the control room operator can isolate the area and dispatch an appropriate response team. The current facility does not have a central control room.

Asked what benefit the new jail will have for Trinity County communities, Ward was unambiguous.

“It has to do with safety and security,” he said, “for the inmates, the staff and for the community. Much as I hate to say it, we unfortunately have some people who need to be in here. The community is not the place for them, so having a place to hold them, safely and securely, benefits our community. It’s just a reality of the world we live in.”

“The other side of it is that we have student programming spaces where we can begin to give vocational training to help with transitioning for when they are getting close to being released… to transition back into communities and maybe give them the skills to get a job and get off whatever their addiction cycle is.” Saxon said it’s hoped that the programming could help keep them from being incarcerated again in the future.

Ward noted the old jail has been operating so long, some of its current methods are out of compliance with updated state laws but will be in compliance with the new facility.

Asked if the new, larger facility will cost more to run than the current jail, Saxon said it’s yet to be seen. Ward said the current jail is using a lot of diesel and propane for heating, but the new facility is all electric. Saxon added that the old jail uses a boiler system which is much less efficient.

Ward added that the cost of replacing failing HVAC equipment at the current facility is prohibitive.

He said time will tell but estimated utility costs may be about the same.

“It could possibly even be cheaper,” Ward said.

A large diesel-powered generator is onsite that will allow the new jail to seamlessly switch over during outages.

Ward said several staff members and correctional deputies are in the process of testing, training or background checking, but the facility will need more.

“We still have a few vacant spots,” Ward said, later noting that all correctional employees have received a 5 percent raise in California this year. Pay for correctional deputies/dispatchers ranges from $2,989 to $3,634 per month and patrol deputies/dispatcher II are offered $3,270 to $3,974, according to the county website. Ward said later that correctional work is a great first job for those looking to get into career law enforcement.

Asked for an estimate for when the new jail will officially open and transfer inmates from the old jail, both Ward and Saxon said it will depend on when the facility can be completed and staff can be trained to operate the new facility and its equipment.

For more information about positions, go to www.trinitycounty.org/Employment.