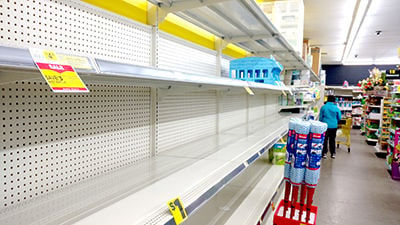 The shelves at Dollar General (above) and Holiday Market in Weaverville were stripped bare of toilet paper over the weekend. Certain other items such as sanitizing wipes were also gone. 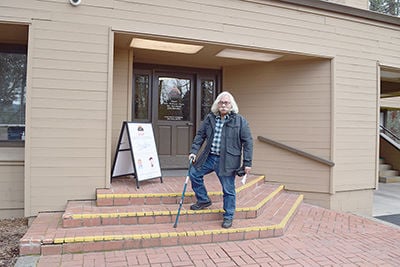 STOP: This sign outside the Redding Rancheria Trinity Health Clinic in Weaverville warned patients to call rather than come right in if they are experiencing a fever, cough or shortness of breath. Gabriel Ortiz, above, of French Gulch, said he ventured out on Monday because he needed medication, but with a heart condition he has been isolating at home.

The shelves at Dollar General (above) and Holiday Market in Weaverville were stripped bare of toilet paper over the weekend. Certain other items such as sanitizing wipes were also gone.

STOP: This sign outside the Redding Rancheria Trinity Health Clinic in Weaverville warned patients to call rather than come right in if they are experiencing a fever, cough or shortness of breath. Gabriel Ortiz, above, of French Gulch, said he ventured out on Monday because he needed medication, but with a heart condition he has been isolating at home.

As the country scrambles to contain outbreaks of the new coronavirus, even Trinity County where no cases have been reported has implemented measures that would have seemed draconian a couple of weeks ago.

Most schools in the county closed as of Tuesday with plans for online or packet work. Many workplaces have closed to the public or limited access by the public. Schools are closed in neighboring Shasta and Humboldt counties as well. Each of those bordering counties have had a confirmed case of COVID-19, the illness caused by the new coronavirus. As of Tuesday, Trinity County had no confirmed cases.

In an update to the Trinity County Board of Supervisors on Tuesday, Trinity County Public Health Nursing Director Marcie Jo Cudziol reported that there have been eight tests from persons in Trinity County to check for COVID-19. Seven have come back negative and one is still pending.

Although tests so far have been negative, there is concern that Trinity County could see some cases.

“The medical community seems to want to lean forward with any precaution that we can take,” said Trinity County Office of Emergency Services Manager Ed Prestley.

According to the Centers for Disease Control, the COVID-19 outbreak first started in Wuhan, China, but cases have been identified in a growing number of other locations internationally, including the United States.

The CDC said symptoms of COVID-19 include fever, cough, and mild to severe respiratory symptoms. COVID-19 is thought to be more contagious than the flu and have a higher mortality rate, but research is still being done on the disease and its transmission. Many people have recovered from the disease, and an unknown number likely had it without ever getting tested.

Early information out of China shows that older adults and people who have had serious chronic medical conditions such as heart disease, diabetes and lung disease are at higher risk of getting sick from this illness, the CDC said.

As of Tuesday morning, COVID-19 information posted by Johns Hopkins University put the number of confirmed cases worldwide at 196,639. Of those patients, 80,840 had recovered and there were 7,893 deaths.

In the United States as of Monday, there were 4,226 confirmed and presumptive positive COVID-19 cases and 75 deaths across 50 states. Most of the deaths have been in the state of Washington.

Even in Trinity County where there are no confirmed cases, precautionary measures are warranted, a Weaverville doctor said.

“It’s a very big deal,” Dr. Donald Krouse said. “I think what they’re putting out is probably wise for the next couple of weeks to limit contact with people.”

“It’s a good idea to slow it (the virus) down so it doesn’t hit too hard,” he said, adding that a large wave can overwhelm the medical system. “You like to string it out if you can.”

On Tuesday, Krouse said he’d just sent his first test on a patient out but those results are not back. He knew that other medical offices had run tests as well.

The lack of confirmed cases here doesn’t necessarily mean there aren’t any people sick from the virus in the community. Dr. Krouse said he doesn’t know if the virus is already here, but based on how infectious it’s been elsewhere, “It’s coming … The way it seems to be acting it’s going to be here.”

“If you get it maybe it’s not going to hurt you but if you come in contact with an older person it’s going to hurt them,” he said.

At his office, Krouse said it’s been a little quieter than usual — perhaps because people feel they should stay home.

He’s concerned over the situation in Italy, where patients multiplied to the point that there aren’t enough respirators for people too gravely ill to breathe on their own.

“A lot of people are going to get it, be sick to varying degrees and then get over it,” Krouse said. “The very sickest people should come to the ER if they’re having really bad respiratory problems. People with more minor symptoms should hang out at home.”

The hospital and local clinics have asked that patients call before entering if they have symptoms of COVID-19 (see below).

Trinity County Public Health has made a number of hygiene recommendations to the public, including frequent handwashing and to avoid touching your face with unwashed hands.

Trinity County is also recommending the implementation of the social distancing and self-quarantine guidelines that California Gov. Gavin Newsom provided on March 15: All those over the age of 65 or those with chronic medical conditions such as heart disease, lung disease, diabetes, or other chronic conditions putting them at increased risk to start long-term home isolation due to their increased risk of serious illness.

The Trinity County agencies also recommend following the CDC recommendations that events consisting of 50 or more people be canceled or postponed and that all bars be closed. Restaurants are requested to reduce their maximum capacity to 50 percent.

Since that recommendation was made, both the state and federal health agencies have ramped up their requests asking that restaurants serve take-out meals only.

For the Mountain Communities Healthcare District, CEO Aaron Rogers said staff are working with the state and public health. The district is looking into getting approval from the state to expand the number of patients it can have at Trinity Hospital, as well as other potential changes to normal protocol, Rogers said.

“We are also looking into funds for extra medical equipment to care for COVID-19 patients,” he said. “I feel that our staff is as prepared as can be, but things are changing by the minute.”

MCHD put out the following information for people who think they may have the new virus: “We have confirmed with Trinity County Public Health that they are not recommending everyone come to the Emergency Room for COVID testing. If you have symptoms you should contact your physician for instructions. If you feel you have a medical emergency, you should come to the Emergency Department. The physician, with guidance from the CDC (Centers for Disease Control and Prevention) will determine if a COVID test is warranted. If you do decide to come to the Emergency Department and you have a fever, cough, shortness of breath, nausea, diarrhea or vomiting, we ask that you stay in your vehicle and call 623-5541, and then press ‘0’to speak with the operator to register.”

A similar admonition is in front of the Redding Rancheria Trinity Health Center in Weaverville, where a sign warns patients who are experiencing certain symptoms to call rather than come right in.

On Monday, Gabriel Ortiz of French Gulch emerged from the Rancheria clinic after a visit with his doctor to get medication for his heart condition. Ortiz said due to his condition he has been isolating at home.

“I’m just hoping and praying for the best for the whole world,” he said, expressing his appreciation for the medical providers who are working to stop the virus.

Rush to stock up

Concern over COVID-19 led to a rush on certain supplies throughout the country. Trinity County was no exception as shelves at Holiday Market and Dollar General were laid bare of toilet paper and certain other supplies.

On Sunday, John Salva at Holiday Market said the rush hit Friday as customers swept up toilet paper, sanitizing wipes, rice and beans. Normally the store would be getting another shipment on Wednesday, but Salva said he is not sure of the supplier’s situation.

“We’re just going to have to wait and see,” he said. “Hand sanitizer, there is no ETA on that.”

An anxious customer asked about sanitizing wipes and Salva paused to advise that regular wipes and rubbing alcohol work the same.

For up to date information

► Centers for Disease Control and Prevention