Late Wednesday night, the glow of the approaching August Complex could be seen from ridgetops along Highway 36, south of Trinity Pines as officers issued evacuation warnings in the area. 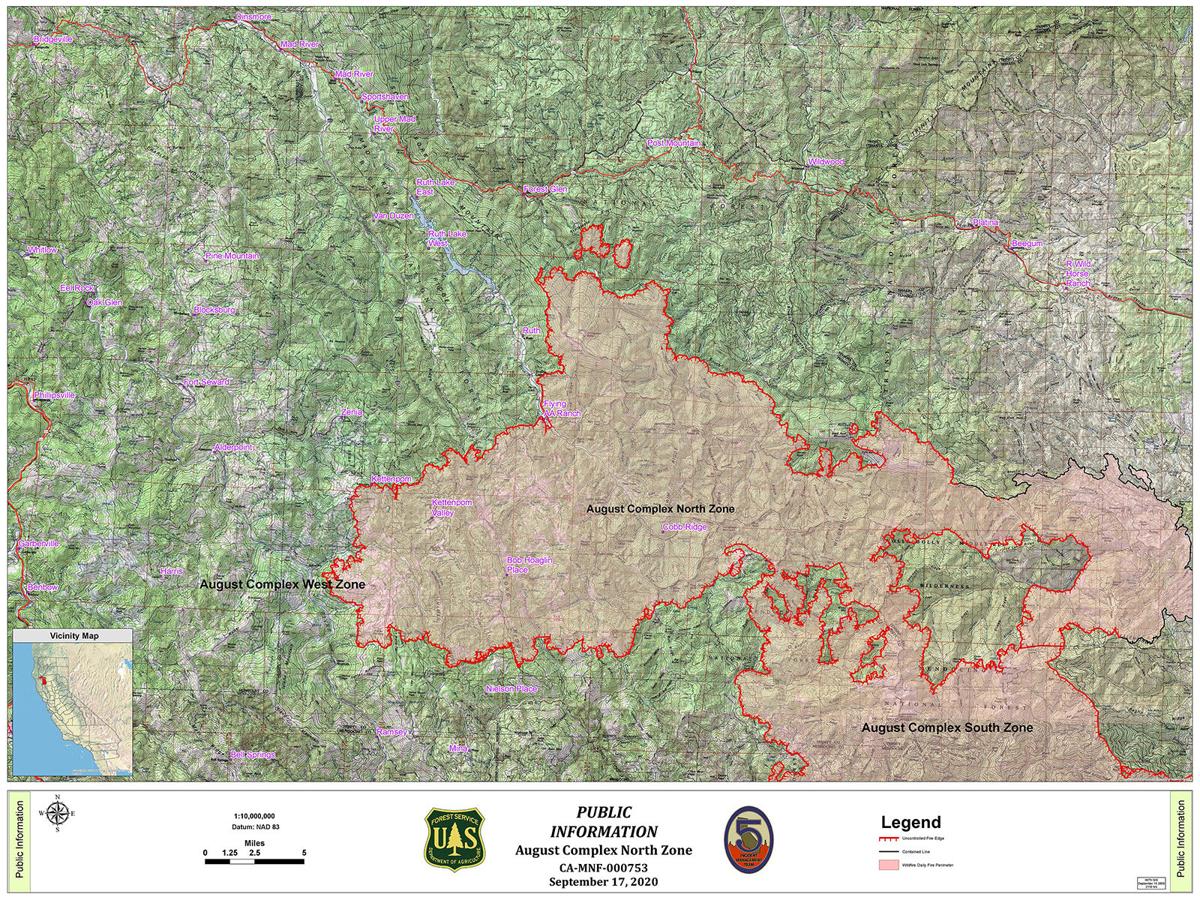 Late Wednesday night, the glow of the approaching August Complex could be seen from ridgetops along Highway 36, south of Trinity Pines as officers issued evacuation warnings in the area.

As of Thursday afternoon, the north end of the August Complex appears to be one ridge, and just over a mile away from Highway 36. The National Wildfire Coordinating Group map shows new starts overnight in areas along Little Rattlesnake Creek.

“The fire spotted to the north of Rattlesnake Ridge and it is a priority to stop the progress north toward Forest Glen, and Trinity Pines/Post Mountain. Line construction continues from Ruth Valley west to the Middle Fork of the Eel River,” said a report from the U.S. Forest Service.

Other evacuation warnings were given along Mad River and the north end of Ruth Lake from Journey’s End to Highway 36.

South of Ruth Lake, the community of Three Forks was mostly destroyed by fire. Along the four miles of Upper Mad River Road south of the bridge, only a few structures and a ranch home remained Wednesday as small fires continued to smolder in the area.

According to a Forest Service report Thursday, a cold front will bring a chance of rain tonight and tomorrow, but firefighters are continuing to protect structures.

“A low-pressure system will bring increased southwest winds today. Higher relative humidity is expected with a slight chance for late afternoon showers in southwest Trinity County. Winds are expected on the ridgetops between 10-15 mph with gusts to 25 mph,” the Forest Service report said. “Rain chances diminish later Friday and wetting rains are not expected. A drier and warmer pattern is expected for early next week.”

With the Hopkins and Elkorn fires absorbed into the North one of the August Complex, the total acreage, according to NWCG is just under 1 million acres at 979,000.

At just over 100,000 acres, the Red Salmon Complex, burning near Hoopa since July 27 is said to be 17 percent contained.

Now at 150,000 acres, the Slater/Devil fires burning over the state line onto southern Oregon are estimated to be 10 percent contained.

A newly discovered fire south of Callahan and north of Trinity Lake has swelled to over 1,500 acres in two days. It's called the Fox fire for its relation to Fox Lake, Creek and Ridge. According to the NWCG map, the fire has been spreading mostly north.

"The Fox fire was discovered on the Klamath National Forest on Sept. 14, 2020 and is burning southwest of Callahan,” according to the Inciweb information system. “The Fox Fire is currently 1,512 acres and 0% contained. The Slater Fire South Zone is supporting efforts on the Fox Fire.”

The Hobo fire and Spring fire have shown no activity since they were contained in recent weeks.