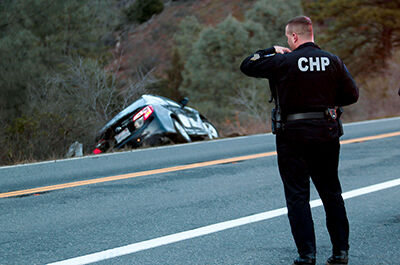 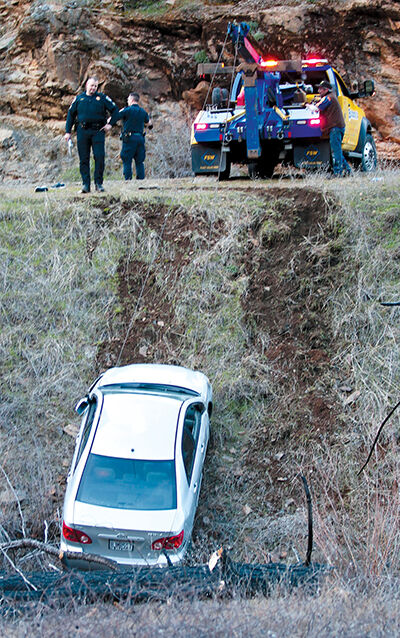 Within an hour and about 10 miles of each other California Highway Patrol officers dealt with two car crashes Sunday, Feb. 21, near Junction City.

The first started in the afternoon when Humboldt Sheriff’s Office reported pursuing a silver Toyota sedan that was stolen from Arcata on Highway 299 entering Trinity County. Deputies discontinued pursuit at about mile marker 4 inside Trinity County.

CHP Trinity River units went to an area west of the Helena turnoff. According to Trinity River CHP Sgt. Nick Ranger, one officer stayed at the location while another officer continued west to look for the car.

Ranger said the officer passed the car and made a U-turn. Once confirmed to be the stolen car, the officer activated lights but the driver did not pull over.

Meanwhile, spikes were set up in straight section of roadway west of Helena. After two tires were successfully spiked, the car reportedly sped up to 75 miles per hour.

“The driver continued 0.5 of a mile from that spot and was almost stopped but then went right and appeared to try to drive off the road,” Ranger said. “The car rolled over one time and came back to rest on its wheels.”

The driver surrendered at gunpoint and was helped up the steep embankment to the roadway. However, a large German shepherd dog also escaped from the car, ran from the scene and was not seen again.

The driver, Indigo Giles, 25, of Humboldt County, was arrested for vehicle theft and felony attempted evasion. Sgt. Ranger explained that the felony evading charge was added because Giles swerved into the oncoming lane during the pursuit. It was later learned Giles took the car from her mother in Arcata.

Junction City Fire Department arrived to control traffic while the car was being pulled up the bank.

At about 5:30 p.m., as the Toyota was being pulled onto the roadway, a second call went out for a vehicle accident 8 miles west of Weaverville. CHP officers arrived at the grade near Slattery Pond across from Eagle Rock to find a dark Toyota sedan off the westbound lane, pointing east.

Officers contacted the driver and conducted a Breathalizer test which showed the driver’s blood alcohol level to be measurable, but below legal limits, Ranger said. The driver was released and the car was later towed from the scene.