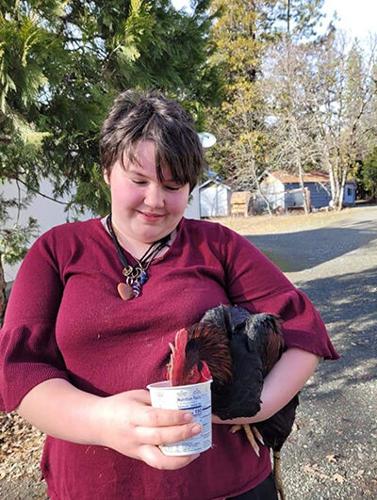 Daughter Amelia Perez with the family's previous rooster, Celeste, which mother Laura Rivara gave up in 2020 after noise complaints. Rivara said she wasn’t versed in county code when giving up her first roosters, and isn't about to give another one up now. 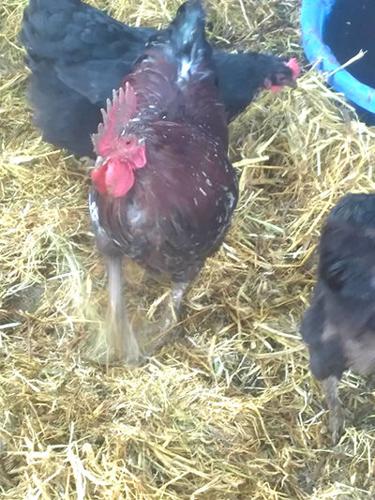 Daughter Amelia Perez with the family's previous rooster, Celeste, which mother Laura Rivara gave up in 2020 after noise complaints. Rivara said she wasn’t versed in county code when giving up her first roosters, and isn't about to give another one up now.

Cock-a-doodle-doo, it’s time for round two.

Regulations and complaints about noisy and nuisance roosters were brought before the county Board of Supervisors April 5. Promises of attempting to amend county code to not allow roosters in certain areas they are currently permitted were made, as well as possibilities raised of taking individual or group legal action against the owners of certain roosters (Trinity Journal, “Rooster Regulations keeping residents up all night,” April 13).

Complaints ranged from a slight annoyance during the day to allegations of an outright nuisance level of noise.

After hearing that attempts may be made to change county code to not allow roosters in her area, one rooster owner, Laura Rivara, reached out to The Journal to tell her side of the story as a rooster owner.

Rivara lives most of the way down Brooks Lane, a hotbed of rooster-related complaints received by the Sheriff’s Office, though her rooster is not the only one in the neighborhood.

Her house, and the coop where her rooster lives, is at least 100 feet away from any neighbor. Rivara said that she picked the house specifically when moving into the neighborhood several years ago because of its rural residential zoning which allowed for keeping chickens and roosters.

For most of the last seven years, Rivara, as a single mom, has raised her daughter with special needs, Amelia Perez, in the same neighborhood while working as a respiratory therapist at Trinity Hospital.

She uses the chickens as a way to teach Perez life skills and work experience. Perez raises and cares for the chickens herself, and they sell and donate the eggs to family, friends and friends of friends, using some of the profits to buy things like feed to further invest in the business, Rivara said.

“So she knows things like it costs money to make money,” Rivara said.

“It’s helped her greatly, she’s had a big improvement, and she loves these chickens,” Rivara said.

She is also quite fond of roosters, both by Rivara’s account, and as evidenced by several pieces of art created by Perez, including a colorful drawing titled, “Rooster taking a nap in a warm blanket,” and a rooster mural on the side of their chicken coop.

“She does drawings, and paintings of them, she’s named all of them,” Rivara said.

Rivara said that back in 2020, after noise complaints from neighbors, she decided to give up the rooster they had at the time, named Celeste, which devastated her daughter.

The most recent rooster owned by the family, named Appa, was grown from a chick when replacing hens lost to an unknown predator tunneling underneath their coop.

Perez quickly grew attached to Appa, and Rivara didn’t want to see her hurt by the loss of another rooster.

“If we get rid of these roosters it’s going to break her heart, and I don’t want to see her go backwards with her progress,” Rivara said.

In an attempt to quell constant complaints, Rivara said she put a “crow collar” on Appa, but it caused a sore on his neck and had to be removed. She also noted that since Appa has been grown and able to crow there have been no problems from predators raiding the hen house.

According to code 6.04.050(B), it is against the law to allow any animal you own to disturb the peace by being unreasonably loud. However, the code mentions an exception for noises made, from among other things, agricultural activities.

Code 6.04.020 defines “Agricultural activities” to mean “those activities related to the growing and harvesting of crops, the rearing and managing of livestock or the production of plants and animals useful to humankind.”

“This is normally understood that using roosters for the propagation of chickens for food or eggs is useful to humankind, and exempt per County Code,” stated Sheriff Tim Saxon in an email to The Journal.

Rivara said that she wasn’t versed in county code when giving up her first roosters, but now that she’s aware, she isn’t looking to give up Appa.

Much like some of her neighbors who have stated an intent to come together and file requests from the Planning Department about rooster complaints in an effort to amend zoning laws, Rivara has also been reaching out to her neighbors with a petition that zones not be changed. In the first day, she said she had collected nearly 30 signatures.

“I’m not one that likes to draw attention to myself, I try to just keep to myself,” Rivara said, “but I feel like only one side of the story was heard.”

100 feet away from a neighbor is close, and you can still have chickens and eggs without a rooster. Although I’m sure there are some roosters that aren’t a problem they are a general nuisance that should not be allowed. When you create an environment for another homeowner which they no longer enjoy their peace and quiet that is absolutely selfish and unacceptable.

Except - they live in an area zoned as rural residential - which allows for roosters. Many people purchase homes in an area specific to their needs. At what point do you draw the line? Children outside laughing. Music. Just generally living and enjoying life. The rights of property owners should not be restricted due to one person who purchased in rural residential - and isn't happy about it. #savetheroosters #roosterslivesmatter

Ms. Rivara's argument is that it would hurt her daughter's feelings to give up the rooster? Life is full of disappointments. Why not pick a disappointment that your daughter can avoid without disturbing the peace on your neighbors? Losing sleep is bad enough but when it impacts one's ability to work? Perhaps Ms. Rivara, you can select a different disappointment for your daughter to avoid that does not impact your neighbors. https://www.fresheggsdaily.blog/2016/08/why-i-dont-keep-rooster-in-my-backyard.html

Sorry but he neighbors who are complaining bought a house on property or adjacent to property zoned RR. Now they want to change the zoning. This shouldn't be allowed. The one neighbor who is an attorney especially should know better, but now he is publicly threating a lawsuit to get his was. What a bully.

Most of the county outside of the immediate city limits is rural residential, and has caused many problems between neighbors that vary more than just roosters. These are generally small parcels that are still small neighborhoods. Choosing to live in RR really isn’t a choice so much as the only option for most subdivisions in the county. And children laughing is no rooster crowing all the time. Chickens great, roosters bullshit.