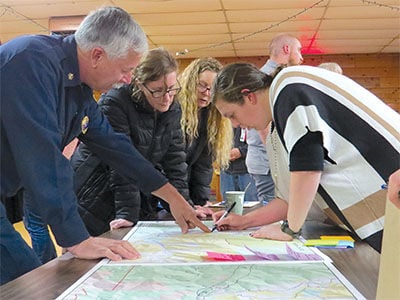 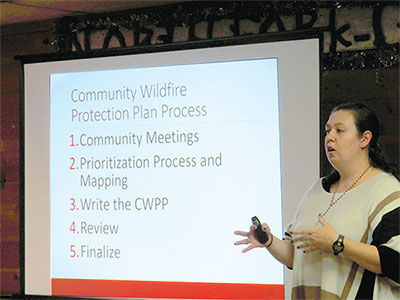 About 13 people, including the fire chief and members of Junction City Volunteer Fire Department, participated in one of the last community workshops designed to reduce the risk of wildfire by reducing the amount of burnable materials.

“They are working to seek improvement of cooperation and coordination of wildfire management throughout Trinity County,” she said. “The Trinity Firesafe Council put together one of the first community wildfire protection plans in the nation.” Fleitz said the plan was first approved in 2001 and has been updated three times since, making the latest round the fourth update.

Funded by Cal Fire, the document allows organizations to bring in more money from other sources to protect local communities, she said.

What not to burn

Fleitz said the meeting was to identify fuel reduction projects in the Junction City community.

“After we identify projects, I take that back and we work to put it into a geographic information system, and we’re going to work on having an outfacing portal, so everybody will have access to these,” she said. “We do share it between agencies right now, but it’s not widely available to the general public at this time.”

Fleitz asked attendees and fire officials to mark up large maps on areas they would like to see leveled, cleared or landscaped for better fire resistance.

“But what we really want to think about tonight is how prepared your community is for wildfires,” she said, noting fuel breaks and defensible space. “But the bigger question, how is everybody working together to ensure your communities are protected? Do you have fuel breaks around your whole community? Do properties adjacent to you meet their clearance standards? What does your alert system look like if there’s no power? How do you communicate with each other to help people get out?”

Holthaus went over ways to reduce fire fuels around homes and communities, including defensible space, clearing of wood and burnable materials from next to homes, and create shaded fuel breaks to eliminate ground fuels.

“Everything out there, all our plants, vegetation and trees; everything is fuel when it’s dry enough,” he said. “The whole key to fuel reduction is separating out the fuels so the fire burns in a slow, more controlled, low-intensity manner.”

“In 2017, I spent almost a year doing postfire inspections on the Butte Fire, down in Calaveras County,” he said. “I inspected 50 to 100 properties … One thing that really jumped out at me was that all the properties that had livestock grazing has the lowest intensity burn rates and all the structures survived and all the trees were alive. It didn’t stop the fire, but it burned through slower and in a more controlled manner and just didn’t destroy everything. Wherever there was a heavy brush component underneath the timber, it burned with a heavy fire and everything was gone. It was like night and day.”

Holthaus spoke of some RCD roadside fuel reductions projects around the area to “hopefully prevent roadside fire starts from expanding into the greater landscape.” He said crews have done most of Red Hill Road and were working to create a community fuel break near Lake Road. He said several other small areas along Senger and Walker Roads had been done. With some grant funding remaining, work should continue into March. He said once done, RCD will have created “a complete system of roadside fuel breaks in the community.” He added that the county assisted with a backhoe and some staff, to clear burned trees left by the Helena fire that were in danger of falling and blocking escape routes.

Asked if areas along Canyon Creek were to be cleared, Holthaus said the area was not part of the grant proposals.

Asked if the Forest Service, the largest land neighbor to Junction City, planned to create shaded fuel breaks next to private property, USFS Fuels Officer Tim Ritchey said that while he would like to clear around communities, but his staff is short and has a long list of current projects to check off.

Why, where and when

Attendees divided into groups, armed with markers and sticky notes to leave comments on local maps as to where they wanted fire breaks, landscaping, ground clearing and roadside fuel reduction projects.

Junction City Fire Chief Justin Kerwick was on hand to provide strategic advice, as well as to point out areas he was concerned about.

Fleitz explained later that all comments and maps go into the Trinity County Wildfire Protection Plan where they will be digitally mapped and put in an information center.

“Our goal is to have them in an outward-facing portal, similar to the parcel viewer map so anyone would be able to go in and use those shape files to apply for grants,” she said. “Right now, it’s mostly reserved for the agencies in the Fire Safe Council. Some of the fire departments ask for them, too, but essentially we take all of this from tonight we map it and I work with fire officials from Cal Fire, the Forest Service, Bureau of Land Management, and the volunteer fire departments to give their prioritization and we also look at fuel loading, the recent fire history and recent fuel reduction project history and those will help to assign prioritization values in one final list for each community.”

Community meetings have been going on since early October in communities and towns around the county.