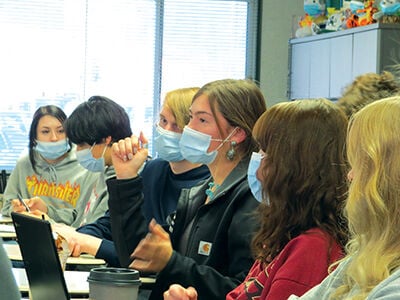 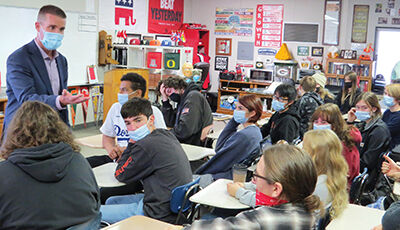 Sen. Mike McGuire’s meeting with a Trinity High School class last week brought up some interesting information, including some of the ways the state is spending a $75 billion surplus and where it came from.

He said one of the main ways California receives income is through corporate income tax.

“The more a corporation makes, the more it pays,” he said. “During the COVID in California, all the technology companies kicked tail. He said companies like Amazon paid several billion dollars more in corporate income taxes.”

“I’m a firm believer that education is the ultimate equalizer in our society,” he said of schools, “and college must be more affordable and accessible, and that we have career training in our schools.”

He said that six years ago, California ranked last in spending per student, falling below Mississippi.

“By the way, California is the fifth-largest economy in the entire world,” he said. “Higher than Great Britain — and we were spending less on our students than Mississippi. We’ve gone from dead last to now, number 15 in five years. We’re now spending about $21,000 per year per student and we are finally investing in career training.” He said the state is spending $1 billion per year to that end.

To the other end, McGuire said the state needs to start schooling kids sooner with transitional kindergarten.

McGuire said that to get a rural jobs plan moving, the state needs to invest in rural broadband. While the fiber line from Redding to Humboldt is partially complete, the federal government mandated it needs to be complete in four years in order to connect the outlying areas of the county.

“California has more homeless residents than any other state in the nation,” he said. “161,000 people call the streets of California home,” he said. “It’s unacceptable … so we have launched the largest permanent housing campaign in our nation’s history. Last year, during COVID, we secured permanent, supportive housing for 8,000 folks. Over the next 36 months, we’re going to build another 45,000 units that will be able to house another 45,000 folks.” McGuire said those residents will have wrap-around support with drug and alcohol addiction in mental health services.

Saying he was to meet with Sheriff Tim Saxon and the Board of Supervisors, McGuire said “We need to come up with a plan for Trinity County.” He noted that most of the wildland in the county is managed by the federal government.

“The way they are managing fire in this county and throughout the North State is simply not working,” he said. “You look at the backfires and how it impacted Trinity Center this year, it is absolutely unacceptable. We have to start managing our forests.”

McGuire said the state spent  $1.5 billion and hired 1,600 extra firefighters. As much as $1 billion of the funds will be spent removing dead and dying trees and brush around communities surrounded by federal forests.

“We have so much to do and so little time,” he said.

“Climate change is here,” he said, adding that grizzled veterans of Cal Fire who believed it was a hoax a decades ago, will now agree. He said while the one to two degree increase in summer temperatures may not seem like much, it does contribute to wildland fires.

“We can’t control the forest fires any longer,” he said. “We could put 20,000 firefighters on the Dixie fire and it would not have stopped it. What we need to do is get out in front of it. We have to take out the 120 million dead and dying trees that exist in the Alps and the Sierras and coastal range. We have to start focusing on selective logging again, and I know it will be super-controversial, but we have to do it because otherwise, we’re going to see a complete nuke of our forests.”

Asked by a student about drought in the state, McGuire said we are currently in the driest period seen in a century and some climate scientists would call this last seven years a “megadrought.”

“About 2/3 of California’s water comes from snow melt,” he said, “so we are in a world of hurt.” Noting that the state budget is in good shape with a $75 billion surplus, McGuire said the state dedicated $15 billion, $5 billion of which will be spent to dredge water sources in low seasons to expand capacity and drill additional wells in communities in danger of running dry.

“We’re going to build Austrian storage so they have storage ponds,” he said. “We are going to put in 25 50,000-gallon tanks so that during the summer and fall months, these communities will have water to turn to. We have to build resiliency into the system.”