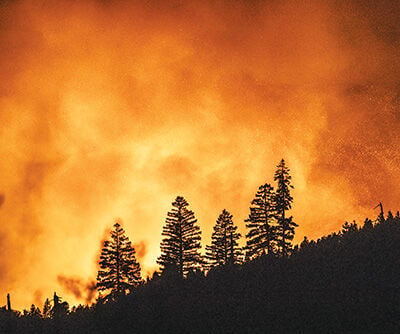 The August Complex near Forest Glen earlier this month. 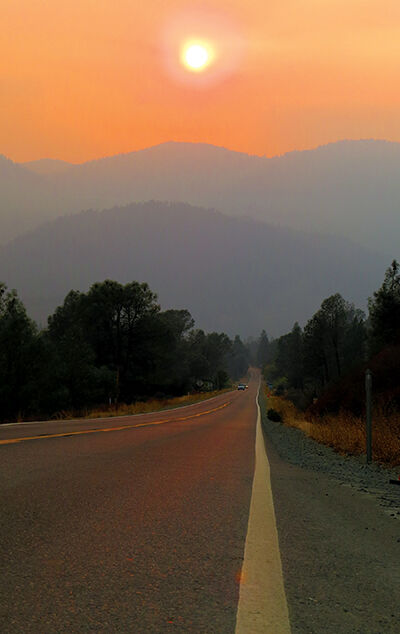 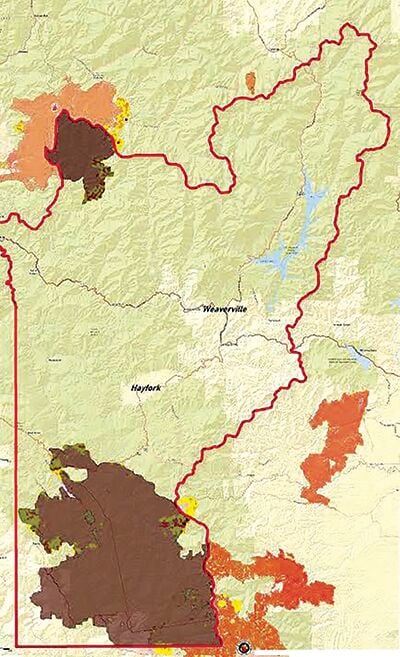 This graph, made of National Wildfire Coordinating Group screenshots, shows the percentage of Trinity County that has been consumed or damaged by fire. Dark areas at the top and bottom of the county represent the Red Salmon and August complex fires, respectively, as of Oct. 8.

The August Complex near Forest Glen earlier this month.

This graph, made of National Wildfire Coordinating Group screenshots, shows the percentage of Trinity County that has been consumed or damaged by fire. Dark areas at the top and bottom of the county represent the Red Salmon and August complex fires, respectively, as of Oct. 8.

Fire officials around the region say that while rains of last weekend made a huge difference on the August Complex and Red Salmon Complex, the fires are still not fully contained. However, the estimated 0.12 to 0.25 inches of rain helped fire personnel achieve a 75 percent containment estimate for the August Complex by Sunday, Oct. 11. Overall acreage for the fire surpassed a million acres last week and is estimated at 1,028,801 acres overall as of Monday.

“This was by no-means a season-ending event, and the fire is still active,” said an August Complex release Sunday. “Starting today and continuing for the next several days the chance of rain is 0%. This drying trend will combine with increased temperatures over the next couple days, which could increase fire behavior and intensity.”

While fire is still active, evacuation orders and warnings remain in effect, and fire officials will continue to coordinate with the Sheriff’s Office.

“Once it’s determined that safety hazards have been mitigated, the fire does not present a continued threat, and fire traffic working in the area no longer present a safety hazard, then reopenings may occur,” a Monday release states.

According to the August Complex information center, the number of personnel working on the complex has dropped 250 from Friday the 9th to Monday as 4,610 personnel remain on the fire.

No estimate has been made as to when crews will reach full containment of the complex.

In the Northeast Zone, fire lines held well across the fire’s perimeter with dozers and crews strengthening primary and alternate containment lines. Near Progeny and the South Fork Trinity River firefighters installed hose along dozer lines to further secure the fire perimeter if firing operations are needed in the future. In Rattlesnake Creek, mop up led by U.S. Marine firefighters continued and additional fire line containment was achieved. Further west near Pony Buck Peak in the 2017 Buck Fire area, warming temperatures resulted in islands of unburnt fuels in the fire’s interior burning out. Near Round Mountain hot shot crews completed line construction in Beegum Creek and further secured line in the drainage.

Tuesday dozers near the South Fork Trinity River are working to complete critical lines west and northwest of Bear Wallow Mountain. Hot shot crews will continue to strengthen line near Round Mountain in Beegum Creek and build direct line in the Buck Fire scar down to the South Fork Trinity River. Helicopters will assist with target bucket drops of water on hot spots as needed. Backhaul of firefighting equipment continued on the east end of the fire Tuesday, approximately 10 miles south of Highway 36.

Continued warm weather and clear skies Tuesday helped firefighters identify and diligently mop up hot spots throughout the unsecured portions of the fire perimeter. Firing operations on unburned islands south of Little Round Mountain may occur, should conditions be favorable. Crews will continue mastication on Mad River Road, constructing dozer line nearby, and improving line west of Van Duzen Road. Where fireline containment has been achieved, crews are beginning suppression repair, which includes installing waterbars and pulling debris over handline and dozer line to reduce erosion potential and other activities to mitigate damage caused by fire suppression activities.

In northwest Trinity County, the Red Salmon Complex is now estimated at 55 percent containment, up 15 percent from before the rain. According to a release from the U.S. Department of Agriculture, the fire remained quiet overnight into Monday.

However, as with the August Complex, rains were not enough to completely snuff the fire.

“Saturday’s steady rainfall has helped moderate fire behavior for several days,” a USDA release states. “Temperatures will start slowly increasing up to 70 degrees, humidity as low as 25%, winds will be light at 5-10 mph. Weather forecasts indicate an increase in northeast winds coupled with hot and dry weather arriving in the area as early as Wednesday evening and continuing through Friday. Skies should remain relatively clear with isolated areas of smoke.”

As long as conditions permit, helicopters will be used to support ground efforts in the area.

Since the beginning of the year, there have been over 8,500 wildfires that have burned well over 4.1 million acres in California.

To date, the total number of fatalities statewide is 31 and more than 9,200 structures have been destroyed.

Southern Trinity County is in a tight spot with unimaginable catastrophic fire.

Several years ago the Weaverville Lions solicited funds for neighbors who lost their homes in the Helena fire, with your generosity the Lions helped them considerably. With more than 1 million acres lost in the August Complex through six counties, the Lions are faced with doing it again for neighbors and friends to the south.

Please consider sending funds to the Weaverville Lions, either by mail at Weaverville Lions, P.O. Box 386, Weaverville, CA 96093, or dropping it off with Lion Dave Marceau at the Floor Store, 1306 Nugget Lane, Weaverville. The Lions hope to assist some of their southern friends with necessary financial help and/or housing.