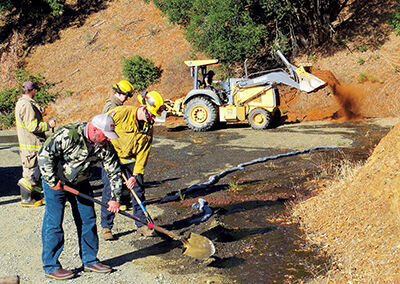 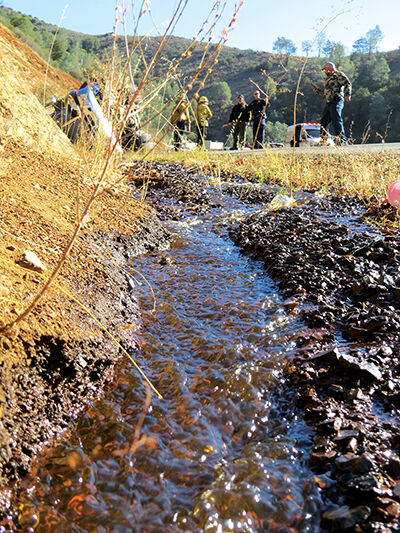 A flowing stream of biodiesel about a foot across and a few inches deep flowed alongside Highway 299 for about 600 feet before being contained at a pullout.

A flowing stream of biodiesel about a foot across and a few inches deep flowed alongside Highway 299 for about 600 feet before being contained at a pullout.

Thousands of gallons of biodiesel fuel flowed alongside Highway 299 east of Eagle Rock quarry near Junction City Monday morning after a full tanker truck overturned and broke open at about 9:38 a.m. According to California Highway Patrol investigators, the westbound driver appeared to have come into the downhill turn and overturned. The upper part of the tanker hit the rocky bank and broke open. Flowing downhill along the north edge of the roadway at about a half-gallon a second, the fuel started to pool at the next pullout. The driver, Wyatt Landrest, 25, of Palo Cedro, was suspected to have sustained minor injuries and was taken to Trinity Hospital for evaluation.

The truck, owned by SST Oil of Redding, was almost empty when it was righted, having spilled an estimated 7,100 gallons of biodiesel.

A large loader responded from nearby Eagle Rock and helped to pool the spilling diesel at the pullout, rather than let it drain downhill, possibly into Slattery Pond. CHP officials credited Eagle Rock staff for their quick response and work. Firefighters from Cal Fire, Weaverville Fire Department and Junction City Fire department worked with hand tools to help pool and contain the spill. CHP investigators said no fuel reached any waterways and was contained by digging a series of pits along the highway.

Biodiesel is a mixture of diesel fuel and vegetable oils and is less flammable. Trinity County Environmental Health, Caltrans Hazardous Materials and Department of Fish and Wildlife staff also arrived to assist.

Environmental Health Director Kristi Anderson said Tuesday morning that the quick response by Eagle Rock staff “saved the day” and kept biodiesel from flowing into Oregon Gulch, and into the Trinity River Watershed. However, a lot of cleanup will still need to take place. Anderson said that soil absorbed most of the biodiesel, which will need to be excavated to keep it out of area groundwater. She estimated the cleanup could take a couple weeks since the spill measured about 600 feet in length.

Anderson said she was relieved to find the spill was biodiesel, rather than diesel fuel. She said because biodiesel contains petroleum, it’s still considered a hazardous waste and will need to be fully cleaned up. Anderson said SST Oil will be responsible for the cost of the cleanup.

The highway through the area was reduced to one-way control for the day and the scene was declared safe at 4 p.m. as cleanup continued.