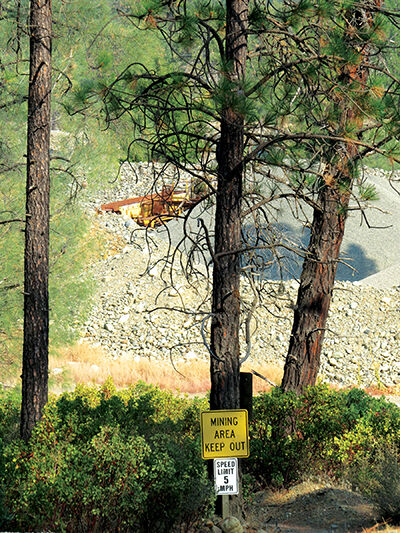 From the gate off Red Hill Road, one can only see a portion of the locally controversial tailings pit in Junction City. 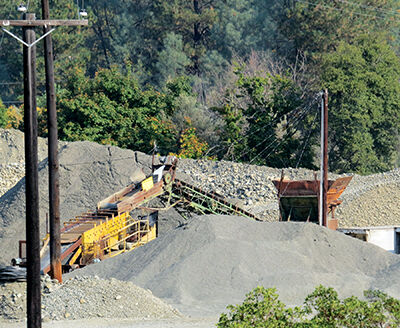 From the gate off Red Hill Road, one can only see a portion of the locally controversial tailings pit in Junction City.

Following about an hour of complaints, Trinity County planning commissioners agreed to hold a meeting at the earliest convenience to consider information and possibly revoke the use permit for the Smith Pit Tailings mine in Junction City.

Staff reports say there is an application in process to amend the conditional use permit to include a rock crusher, truck scale, onsite lighting and amend mining boundaries to include the material stockpile area.

“Further studies have been required to complete the environmental analysis for the California Environmental Quality Act,” staff reports say.

According to a commission staff report, ongoing complaints have been coming in regarding the use of the property, including a noisy rock crusher. According to staff reports, Planning Director Kim Hunter has visited the site numerous times in the past 18 months, in response to complaints that a rock crusher was being used, but in only one instance was a crusher confirmed to have been there. At the meeting, Hunter said she has not seen a crusher there but has heard conflicting reports that one may have been moved from the site prior to her arrival.

“Director Hunter drove by the site numerous times on weekends after being contacted by nearby residents that the site was open and operating on weekends. No activity was noted during these visits,” said staff reports.

Further controversy circles around 500,000 cubic yards of slide material which was brought to the site from the French Creek landslide in 2017.

Trinity Sand and Gravel owner Judson Buick later said he does not have an offsite location where he can process the material if the permit is revoked. Trucking it to another location would require hundreds of truckloads and take several months, he noted.

Buick said he bought the site in 2018 and had no idea of the amount of contention it would make. He said he had been told he could continue operating the site as it had been for two decades before he purchased it and that he had no idea of the scope of complaints made to the county. He said any complaints he’d received were dealt with immediately.

He noted that nearby Junction City School had complained about the number of trucks driving on Red Hill Road, specifically during pick up and drop off hours. Buick said he instructed his drivers to be mindful of speed limits there and not to pass the school in the morning and afternoon.

He said he has spoken with many complainants and has told them he is operating within his use permit and that he hopes to have the site reclaimed by 2025.

He said he also called for a noise study of his operations to be done among neighbors, but only four area residents agreed to participate.

A Trinity Sand and Gravel employee who did not give her name, said the original permit amendment was made in order for Buick to acknowledge all the past operations which he was led to believe were ongoing and a normal part of the operations. She said it took a lot of time for anyone to communicate area complaints, which appeared to have been in regard to previous operations.

“When someone calls and says, ‘you have a rock crusher on site,’ and there’s no rock crusher on site, that doesn’t give us an actionable item to investigate,” she said. “We do investigate what is going on at the pit today, and what noise are they hearing? We were asked to do a noise study and we thought that was a great idea… and we were waiting for those parameters to get it done.” She said they immediately consulted with an engineer and had a proposal back to the commission in 48 hours.

She said that of seven noise study requests, they only received four back. She said it was felt to be inadequate and started again. She said of 13 requests mailed, only four came back.

“For the community to be concerned about the noise level and unresponsive to getting the actual data -- I don’t understand,” she said.

Junction City School Supt. Christine Camara read a letter from the school’s governing board, saying that when the second phase of a tailings project was set into motion in 1997, there were concerns that the governing board did not object to the reclamation project.

“They were assured that the safety concerns would be mitigated and that the reclamation plan and the conditions of approval set by the Trinity County Planning Department would be followed and enforced,” she read. “Unfortunately, the reclamation plan and conditions of approval were not followed over the years and our concerns for the safety of our students has grown and the illegitimate activities of the project have increased.” She said the original approved project was remove dredger tailings and restore the land to a condition similar to that before mining occurred there.

She said equipment has been brought to the site against Buick’s permit and the beeping and rumbling of operations is constant and happens all the time. She said other violations included rock crushing, roach washing and the creation of piles of unused equipment there. Camara added that the number of trucks passing the school cannot be counted and that the same day, she witnessed a large dumptruck passing the school site during pick up hours, in direct violation of condition 5 of the use permit.

She said the school opposes any amendments to the permit and asks that the board consider its revocation.

Area resident John Brower said his kids attend JC School and questioned whether the sites activity could be considered reclamation, as defined. He said the activity squandered the trust of the community and asked that consideration of revocation be placed on the next agenda.

School staff member and nearby resident Liz McIntosh said the most recent amendment to the permit was made in 1997 and allowed for reclamation in order for the site to reopen, but that the site has become an industrial operation.

She also said materials with unsafe levels of lead were brought to the site from another operation.

Buick later said that when he learned lead containing materials were arriving, he stopped the process and only a small amount got through.

Resident Lance King said at times equipment has been running all night and that he’s been able to record the noise.

Neighbor Nancy Barton said living across from the operation is like being in an ampitheater of grinding, grating metal, nonstop noise.

She expressed concern for neighboring schoolkids who may be exposed to dust and for the neighboring Trinity River.

Neighbor Martha Helberg said that when she complained to Buick about the noise, she was told, “that’s tough.” She said she’s endured 23 years of noise and said it just has to stop.

Josh Brown said the mine has become a rogue operation that continues to work outside its permit, and that its violations have been well documented. He said that along with the sounds of grating metal and rocks, residents are also exposed to the smell of diesel fuel. He said he is participating in the sound impacts study but was told the test noise would only simulate the described activity. Alarmed by the testimony that a truck had been seen near the school that day, Brown said he doesn’t trust that Buick will stay within his permit and consider community safety.

Area resident Mike McLaughlin said while he understands that Buick is a businessman, the activity is not in the intent of the permit. He asked the commission to consider the historical permitting and intentions for the site. He asked that the board consider revoking the permit, as it’s been years since it was enforced.

Justin Hawkins said activity occurs at night, and that there is a clear history of permit noncompliance. He said the use is not compatible with the area’s Open Space and Rural Residential zoning. He said retail sales of material is also occurring there, even though it’s not included in the permit.

Melissa Nielson said she owns a separate property closest to the site, but has been unable to sell it, due to the issues surrounding the operation. She said she has personally seen a rock crusher on site and can hear it from her home three miles away.

Tilghman Myers, a resident of the neighboring Chagdud Gonpa, said the noise is constant and doubted that a simulation would accurately mimic the sounds of operations there.

Back to the board

The commission heard testimony from area residents with complaints about noise, large trucks and other issues. The commission may modify a use permit at the request of the owner or or revoke it when it determines the use is being conducted in a manner detrimental to the public health, safety or welfare, or in a manner so as to constitute a public nuisance, in violation of any condition imposed by the planning commission.

“If the planning commission determines that the detrimental aspects of the use which exist may be alleviated through a modification to the use permit, it may make such modifications in lieu of revocation,” staff reports say.

At about 10:45 p.m., after a short discussion, the board voted 4-0 to continue the topic and consider revoking Buick’s conditional use permit. A date for that hearing has not yet been set and the board took no other action on the item.