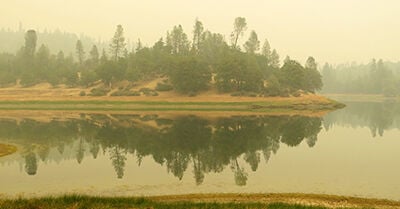 Ewing Reservoir in Hayfork reflects the smoky skies. Below, a thank-you sign graces a fence at the Fairgrounds fire camp. 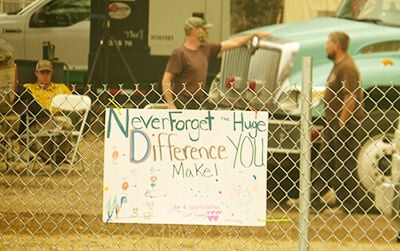 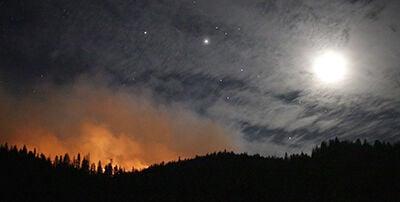 Fire from the August Complex illuminates the night sky as the moon attempts to peek through the smoke in Southern Trinity County. 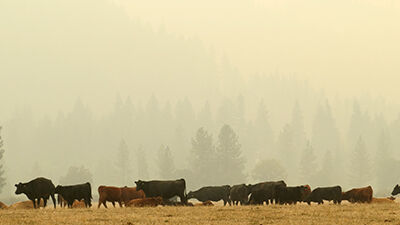 Cattle graze under smoky skies in Hayfork this past week. Air quality throughout much of Trinity County has remained unhealthy as fires around the North State contribute heavy smoke.

Ewing Reservoir in Hayfork reflects the smoky skies. Below, a thank-you sign graces a fence at the Fairgrounds fire camp.

Fire from the August Complex illuminates the night sky as the moon attempts to peek through the smoke in Southern Trinity County.

Cattle graze under smoky skies in Hayfork this past week. Air quality throughout much of Trinity County has remained unhealthy as fires around the North State contribute heavy smoke.

Security was tight around fire areas near Hayfork this week as firefighters continue to fight the northeast end of a fire that has now consumed more than 1 million acres of land across seven counties. According to the county office of Health and Human Services, it’s also destroyed 127 residences, and 175 outbuildings in Southern Trinity County. The August Complex surpassed the million-acre mark on Oct. 5, as it continued to move outward in several directions. The fire has consumed a majority of Trinity County land south of Highway 36, almost reaching into Humboldt County near Zenia and Mad River as of Monday night. According to the National Wildfire Coordinating Group fire map, the major hot spots in the county are north and west of Zenia, east of Mad River, south of Post Mountain, at the Shasta/Trinity/Tehama county line junction, the northeast edge of Ruth Lake and at the southern border of Tehama County.

Highway 36 remained closed at the Highway 3 junction to near Mad River with Caltrans and Highway personnel staked out there over the weekend. The Trinity County Fairgrounds in Hayfork were also off limits to the public, since a fire camp has been set up there. Members of the public who were trying to get into the fairgrounds over the weekend were met by security at the entrance.

The week in fire

Information officer Kale Casey noted Monday that the Trinity County section of the August Complex has been divided into two sections, northeast and northwest.

Operation Sections Chief Reggie Bray said Monday that south of Hyampom and north of Ruth Lake, crews continued to snuff hot spots down the South Fork of the Trinity River.

“Last night, the fire continued to push across some dozer lines just north of Journey’s End Store,” he said. “Crews were in there this morning trying to assess that and find places they can implement some control actions and fire lines to try and start to contain that.” Bray said crews backfired in the area and brought a burn down from the hillside next to the store.

Bray said the fire continued to grow south toward Zenia, but crews are continuing to monitor a dozer line to the south and east of the area.

“Last night, we closed Van Duzen Road, even to fire traffic,” he said. “The fire was approaching it from two sides, and multiple trees down. It was too dangerous for even firefighters to be in there. We’ll be assessing that today to see just what that looks like.”

Bray said the Forest Service has had excellent communication with Cal Fire crews recently in coordinating fire efforts as federal firefighters have taken command of the northwest zone.

In an update Tuesday morning, Casey said crews will be receiving some much-needed help on the fire lines. He said 250 U.S. Marines and sailors will be coming from Camp Pendleton to assist.

In the days after evacuation warnings went out last week to the areas along Ruth Lake fire officials said it was becoming a problem that residents were defying evacuation orders to remain with their homes.

In a 10 a.m., briefing Oct 1, Alaska Team information officer Kale Casey said he’d received a report from smokejumpers who said no structures were lost in the Ruth and Hettenshaw areas Tuesday.

“Fixed wing aircraft equipped with infrared sensors were used [Sunday] to gain further information that will aid firefighters in locating and snuffing out any further spot fires,” according to a USFS release. “Contingency and alternate lines are being identified in the event that the fire moves further north. Firefighters successfully conducted firing operations to reduce fuel in order to protect the Journey’s End structure as well as others in the area. This will attempt to pinch off the fire as it backs down the hillside.”

“By doing this in the evening, crews hope to take advantage of the higher humidity and lower winds to safely provide a slow creeping fire to reduce fuel between the fire front and the contingency lines. Along this front, this continued coordination with Cal Fire is critical to our success is containing this fire.”

As the Alaska Team primarily uses Facebook to post updates and videos, it is also subject to public comments. Last week, it appeared that spokespeople were responding to some comments from people alleging that the Forest Service and Cal Fire aren’t working together.

“Please refrain from trying to create division between the Forest Service and Cal Fire, Casey said. “It doesn’t help.”

For those who have complained online that they didn’t see any work being done, Casey noted that just because someone doesn’t see firefighters, it doesn’t mean they weren’t there.

“There are wives and husbands working with us who had firefighters who dug line all last night that you didn’t see, or who worked on a portion of the fire that you don’t know of,” he said, “and you’re saying you feel abandoned.” Casey said all fire personnel understand that it’s a scary and stressful time for residents.

“There’s a perception that there is a limitation on Cal Fire’s presence and that is not true,” he said at a later briefing, noting that Cal Fire is using a lot of contract fire engines, as their personnel are working all over Northern California. He said there’s never a time when Cal Fire is asked to come to an area and doesn’t arrive.

“We are one team, we all work together,” Casey said.

Low winds in the inland areas of the state have left lingering smoke over much of Northern California.

A smoke outlook issued Monday by the Forest Service predicted that a storm system may bring wind to the area late in the week that may finally blow the smoke out of the area.

The National Weather Service has included a smoke forecast link on its website with a daily animation map of where the smoke is expected to go. Enter your zip code to narrow the region and click on “Daily smoke predictions for NW California,” under News Headlines.

“Hot and dry conditions persist,” according to the Inciweb information system Monday. “Smoke remains very thick in the lower valleys with visibility reduced under a mile. Temperatures will be 88-93 in the valleys and 75-80 in the higher elevations. The humidity will be 10-15% with 4-8 mph wind.” The NWS is also predicting a chance of showers Thursday night through Saturday.

The report said Sunday lower winds and smoky conditions moderated the fire’s behavior but continued to spread due to low humidity and dry fuels.

Air resource manager Jeremy Michaels said his office has been gathering carbon monoxide data in the field to determine what levels firefighters and the public are being exposed to. Using small carbon monoxide detectors, Michaels said prolonged exposure can make one delusional, cloud judgment, cause headaches and nausea.

“The longer you are exposed to that when you do not get clean air… You could be getting some impacts from carbon monoxide,” he said, noting that firefighters get a break from the constant exposure through their breathing apparatus. When possible, camps are set up outside smoky areas for the same reason.

Casey said a monitor is in place at the Ruth Ranger Station and he will be getting data from it soon.

“All the people who didn’t evacuate from Post Mountain have been in really heavy, thick air,” Casey said. “That’s going to affect [them] and it really is cumulative.”

“Not only is it carbon monoxide, but some of the things we are seeing, like we have a spike camp in Hayfork and the good news is we’re not seeing carbon monoxide and that’s great, because what we know is that this is a dense, heavy gas,” Michael said. “You have to be very near an active fire or a drainage where that gas can move down. That’s why Ruth Lake is such a concern -- it’s a large bowl and all active fire [smoke] is going to sink down in there.”

He said that after weeks of exposure, even the most healthy people will start to have health problems and carbon monoxide exposure will compound those issues.

Fair CEO Carrie Bayley said that while the fair is happy to help the community during emergencies, revenue from the government for the use of the fairgrounds happened at an opportune time. With county fairs around the state canceled due to COVID-19, the fairground wasn’t able to raise its usual revenues this year. Bayley explained that the Fair has lost-revenue insurance, but so did many other fair boards around the state.

“Every fair in California was canceled this year,” she said, explaining that all fairs in the state had to split the pool of available insurance funds. “We got about $9,000, which is about 20 percent of what we would usually get.” Bayley estimated that the funds may also not be available until 2021.

However, when a large fire camp was evacuated from Shasta County to the Trinity because of the Zogg fire, commanders opted to use the fairgrounds.

Bayley said the Fair Board is currently negotiating a rate with state officials, but the fairgrounds typically receives $3,000 to $5,000 a week for its use.

She said firefighters are using the north end, while the south end is being used to board displaced residents with large animals.

She said that while no one wants wildfire in their region, having the fire camp in such a prominent location gives some residents an increased sense of security.

Casey said firefighters appreciate the support given by residents when they’re “spiked out” at camps, but reminded people that firefighters have all they need in the campsites.

He said the best ways to show gratitude are thank you signs and stamped post cards they can use to send messages to their loved ones.

Briefings and updates can be found on the US Forest Service, Shasta-Trinity National Forest Facebook page.

Everyone is understandably worn out. Residents, FFs others. It's been a tough slog.