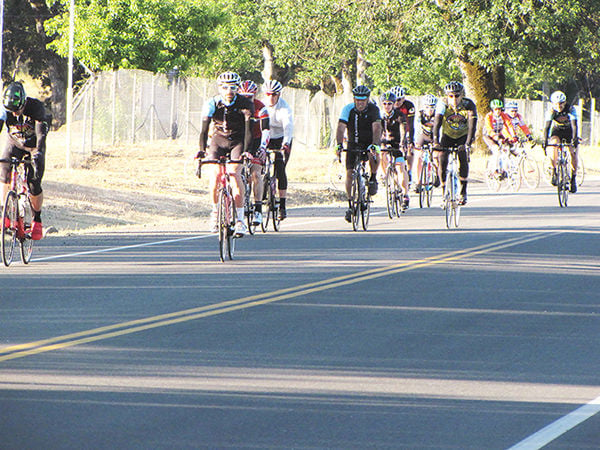 Last year’s Hayfork Century riders take off early in the morning from the fairgrounds at 7 a.m. 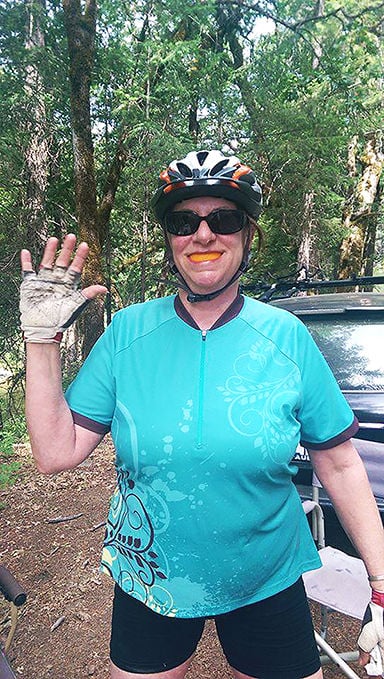 The author, Christine Seronello, hamming it up with oranges while taking a break at the Hyampom rest stop.

Last year’s Hayfork Century riders take off early in the morning from the fairgrounds at 7 a.m.

The author, Christine Seronello, hamming it up with oranges while taking a break at the Hyampom rest stop.

It is with great regret that I announce to Trinity County that the Hayfork Rotary has discontinued the annual Hayfork Century bicycle event. This is an event that has been dear to my heart since the inaugural in 2009. That year, my friend Ginny Allen and I committed to trying our best to participate in the least physical of the different rides, the Family Fun Ride from the fairgrounds out to Nine-Mile Bridge on Hyampom Road — a mere 17-mile round trip. Worried about our level of fitness, we decided to start “training” a couple of months before the June event. We saddled up and I made it clear that I could not commit to making it past the Stetson’s home around the first 25-mile-an-hour turn. Much to our surprise, we made it all the way there and back, laughing and hooting the whole time.

Empowered by my physical prowess, I participated the next two years in the 40-miler that ran from the fairgrounds out Highway 3 south to Highway 36, east to Wildwood Road, to Highway 3, and back into town and back to the fairgrounds. I won’t say it was easy. Truthfully, it took everything I had physically, and when I came up short in that category, it took everything I had mentally to pull it off.

The ride options in the century were from easy to grueling to easy.

Attracted to the fundraising aspects of such an event, I thought to make the ride in my first 40-miler a fundraiser for the Hayfork Volunteer Fire Department. I begged people to pledge a certain amount per mile I rode and ended up collecting over $1,500 for the department. That’s how popular our volunteer fire department is. It almost made up for the physical exhaustion!

The idea for hosting a century bicycle event was the brainchild of Mike Cherney, an avid Hayfork bicyclist who had ridden in other century events. He proposed it to the HF Rotary as a fundraiser that could attract people from out of town. Experienced in riding the roads of southern Trinity, he mapped out the routes of the various-distance rides and Rotarian Karl Fisher lapped it up. Cherney not only rode in those early events, but consulted with the Rotary on all aspects of hosting this type of event.

This was no small task for the Rotary. So much to do! Volunteers needed to be rounded up to staff the numerous rest stops along all the routes, which totaled more than 100 miles. High-carb foods needed to be stocked at all those stops: boiled potatoes, dates, oranges, PB&J, and, of course, plenty of water. Don’t forget the portable bathrooms! Marking the routes with signs and chalk on the road. Breakfast, lunch, and a full barbecue dinner for participants was included, and sales of commemorative T-shirt and hats the first couple of years also required more volunteers.

Then there was the safety and communication factor of not having cell service throughout the routes. The TC Amateur Radio Club volunteered to get involved and offer one representative with ham radio equipment at each rest stop. All the participants in the rides had visible entry numbers, and they were recorded as they arrived at each stop. Every rider had to be accounted for at every step of the way, and this could never have happened without the radio club.

The local business community rose to the task of helping finance the event by sponsoring the rest stops, and it was a great feeling of local camaraderie seeing their logos on signs. Their own business staff often volunteered to staff the rest stops.

From 2009 to 2016, the HF Rotary sponsored seven events, with the 2015 event cancelled because of the fires. I rode in five of those seven, opting out one year because of a leg injury to follow and photograph Helen Stone in my car on her 40-miler, and opting out last year in order to cover the event for the Journal. I logged almost 300 miles in my car, chasing the riders for good photo ops.

In every event, I always made a point to go to the BBQ afterwords and talk to the wonderful people who came to Hayfork to participate in our Century event. I wanted to hear everything they had to say about our event. This, by far, was the icing on the cake for me. There’s something about living in a pristine, heavenly environment, and hosting people who’ve never been here before. The riders were simply blown away by the HF Century. Our mountains were challenging enough for the most hardcore riders, and the scenery was off the charts for them. I think the couple who rode a tandem bike in last year’s event, Laura and Daryl Spano of Fremont, CA, were best at summarizing the experience. They both had thumbs up for not only the event, but for their accommodations at the Timberjack Lodge, the beer at the Redbud, and the people of Hayfork. “In the dozen or so century events we’ve ridden, we’ve never met nicer people than those living here in Hayfork!” they said.

There were other sweet spots, like the doctor from Reno who came with his young son Alex to do the family run ride with Alex riding a kids’ bike, and then two years later Alex is riding a big bike on the 40-miler! And I’ll never forget the year former TC deputy Bill Broschat came back from Shasta to ride the 40-miler.

In the end, lack of enough participants made it economically unfeasible for the HF Rotary to continue the HF Century. The remoteness of our locale and lack of accommodations were no doubt contributing factors. Even though the Timberjack Lodge opened in the final years, it was probably too little, too late. Other reasons cited by the Rotary are “staffing issues and and the deterioration of some of the Century’s routes,” said HF Rotary president, Diana Stewart.

Accolades to the HF Rotary for sponsoring such an exciting event for so many years, and introducing so many out-of-towners to the wonders of southern Trinity County.

And, hey, from me to you — thanks for the rides!