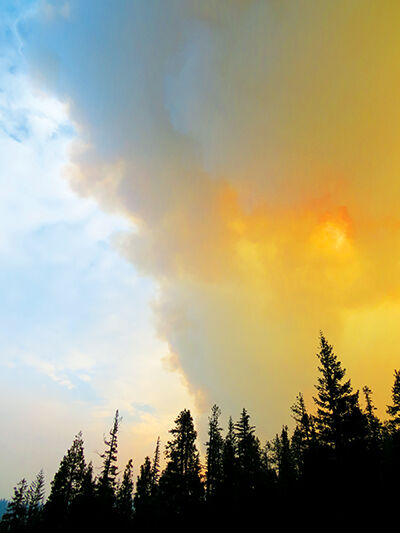 Flame and smoke rise above the River Complex near Callahan late last week. 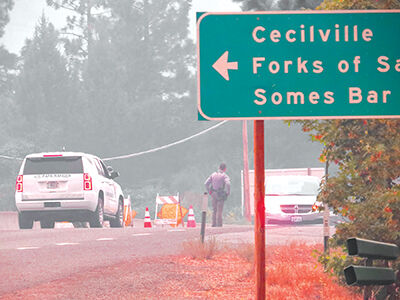 Flame and smoke rise above the River Complex near Callahan late last week.

When it was started by lightning July 30 in the Trinity Alps Wilderness, the three fires of the River Complex were far from any structures, but by Sept. 13, the 185,951-acre fire was being fought at the back doors of Coffee Creek in Trinity County and Callahan in neighboring Siskiyou County. Two of the fires, the Haypress and Summer fires, have merged and consumed 180,011 acres as of Monday morning while the Cronan fire is fully contained at 5,940 acres. The complex was 30% contained as of Monday morning.

He said that near Coffee Creek, crews were widening the fire line to about 300 feet in order to protect the area west of Coffee Creek to Highway 3, he said. A combination of hand lines and dozer lines are in to protect areas south of Coffee Creek. Burns said fire in an area southwest of the location has not moved, partly due to a lot of rocks in the landscape.

The southwest perimeter of the map was blacked out with containment line Sunday after several flights over the area.

“This fire is dead in the rocks,” Burns said. “There has been no detectable heat through the [infra-red] for the last six days and after the recon flight it was decided we’ll call this portion of the fire contained.”

Predicting that the area will stay dry through Monday night, Burns said the fire activity will increase.

“Fortunately, most of the fire is in a backing alignment, that is it’s not in a position to make upslope runs, so we’re trying to take advantage of that and stick the fire where it is now and we have the people to protect private land holdings.”

“The plan is to continue mopping that up and looking for sources of heat near the line,” he said. Just east of Callahan, the fire reached the scar from last year’s Fox fire, and has not advanced farther, he said.

“The plan is to keep this in check until we can get lines on more favorable ground,” he said, “and hopefully, just let the fire back down to it.”

As for the Cronan fire on the northwest area of the complex, it has been considered contained for over a week and crews are now hauling hoses, pumps and other equipment back out in order to use it elsewhere in the state.

“With all the fires in Northern California, our cache in Redding is pretty much empty of equipment and we need to get that out either to other places on this fire or to other fires,” Burns said.