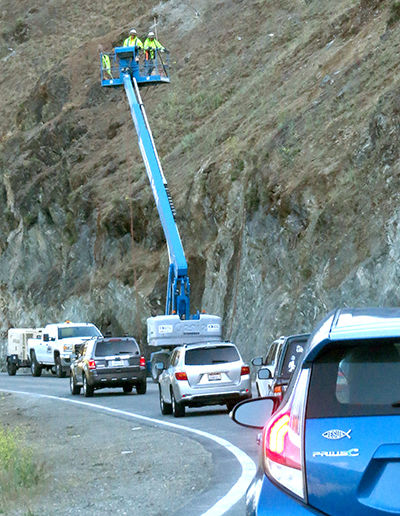 Drivers go around construction vehicles on Highway 299 as crews work on the steep bank west of Junction City. 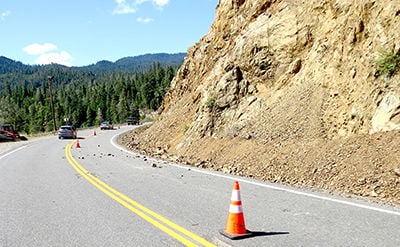 Rocks fall to the roadway.

Drivers go around construction vehicles on Highway 299 as crews work on the steep bank west of Junction City.

Rocks fall to the roadway.

After 16 months of work and more than $20 million, motorists can pass unhindered through a Downriver area of Highway 299 that has stopped countless motorists. However, if motorists think they will now have smooth sailing to the coast this summer, they may be disappointed.

Called the “Heleslide” by Caltrans for its proximity to Helena, the slide closed the highway on Jan. 9, 2019, for about 32 hours. A couple weeks later contractor Stimpel-Wiebelhas Associates took on the job of peeling back the mountainside to expose harder ground. By February, the crews had moved 80,000 cubic feet of rocks and soil and created three 50-foot-tall benches into the steep hillside. They also had to relocate the highway south toward the river so that one lane of traffic could pass. Traffic remained under one-way control for the duration of the project, but now, both lanes are clear and open.

About the time the Helislide was reopened, two other project areas closer to Junction City pinched traffic down to a single lane, stopping traffic in both directions for up to 20 minutes or more. Caltrans Information officer Chris Woodward said the current projects are necessary, due to frequent falling rocks on the roadways. Rockfall draperies are to be installed to keep debris from falling. The single project includes two locations, one just west of Junction City, the other just east of Burnt Ranch.

Woodward estimated the sites should be done in October, but several factors may affect that. He said the Burnt Ranch side will undergo blasting at some point which may cause longer delays.

“Motorists will encounter one-way traffic control in the project area, Monday-Friday during daytime hours, with up to 15-minute delays,” a Caltrans release said. “The project is currently anticipated to be completed by late July.”

More information on highway projects can be found on Facebook and Twitter. The public can also call 530-225-3426 during working hours or send an email to D2PIO@dot.ca.gov.