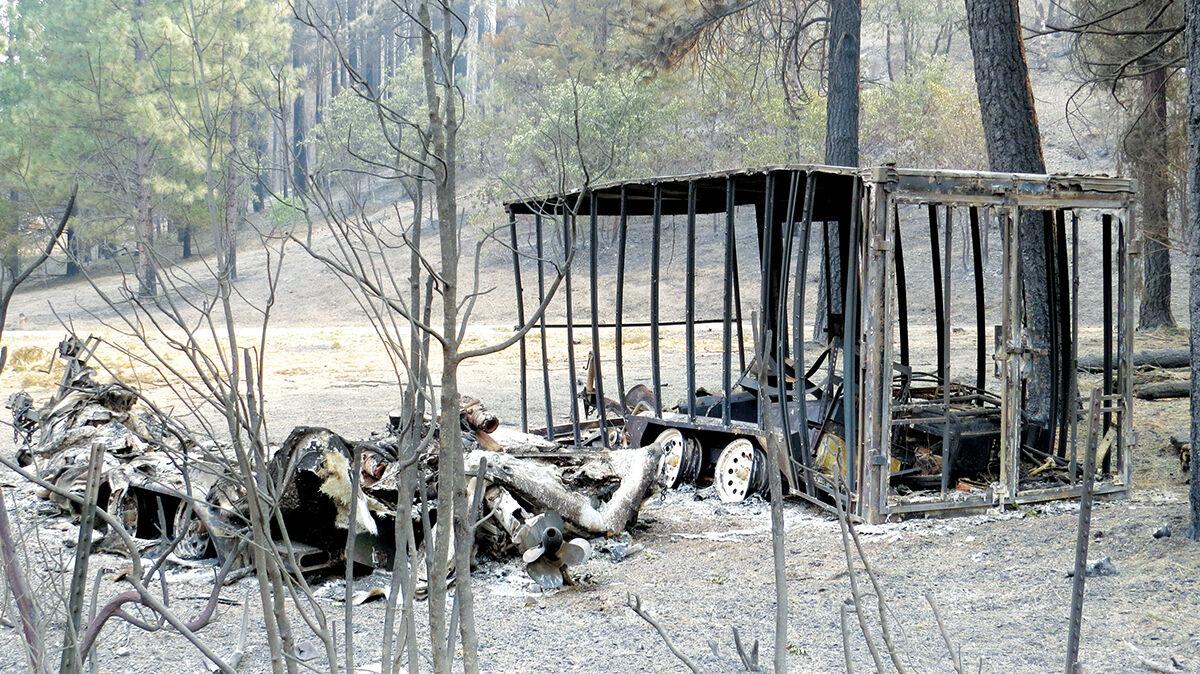 The community of Three Forks was almost fully destroyed by the August Complex fires last week with only a few homes still standing along Mad River Road southeast of the airport. 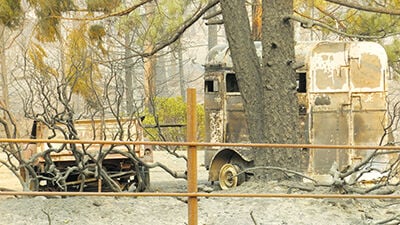 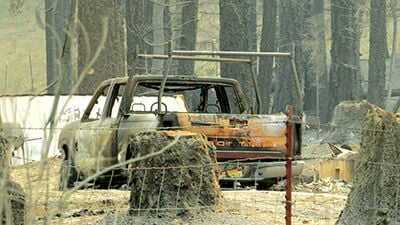 A letter from Trinity County Environmental Health Tuesday said that fires in Ruth, Kettenpom, Three Forks, Hoaglin and surrounding areas have destroyed 152 structures. The letter says the county has not seen such devastation since 2017 when the Helena fire destroyed 117 structures in and near Junction City. 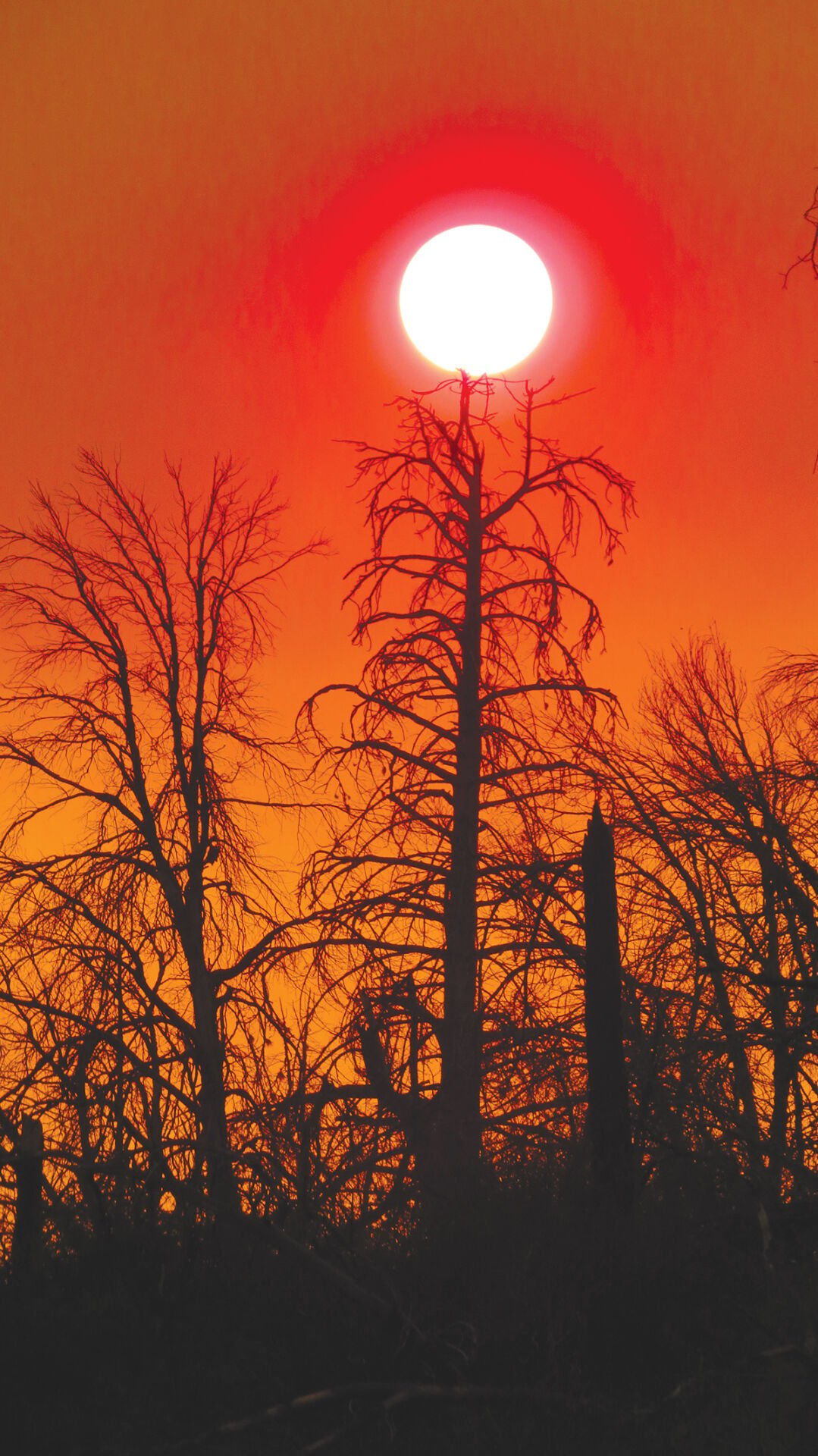 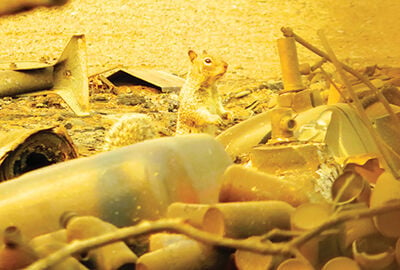 A ground squirrel explores piles of debris south of Ruth. 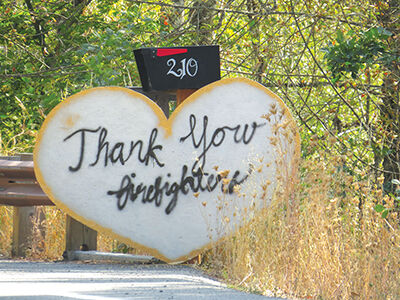 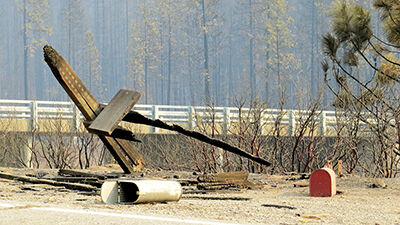 Near Three Forks, steel mailboxes sit on the ground below the wooden posts that burned away below them.

The community of Three Forks was almost fully destroyed by the August Complex fires last week with only a few homes still standing along Mad River Road southeast of the airport.

A letter from Trinity County Environmental Health Tuesday said that fires in Ruth, Kettenpom, Three Forks, Hoaglin and surrounding areas have destroyed 152 structures. The letter says the county has not seen such devastation since 2017 when the Helena fire destroyed 117 structures in and near Junction City.

A ground squirrel explores piles of debris south of Ruth.

Near Three Forks, steel mailboxes sit on the ground below the wooden posts that burned away below them.

Wildfires continue to burn in and around Trinity County, with some edging closer to communities. The north end of the huge August Complex was pushing toward Highway 36 in Southern Trinity County.

“Dozers and other heavy equipment continue to tie in existing ridges and roads to keep the fire south of Highway 36,” according to the Inciweb information system Monday morning. “Firefighting resources and dozers are also working hard within and around the community of Post Mountain/Trinity Pines to improve pre-existing dozer lines.”

In a release Monday, Incident Commander Norm McDonald said the lines are being cleared to protect communities.

“Fire managers are focused on the protection and defense of the communities of Ruth Lake, Forest Glen and Trinity Pines/Post Mountain,” according to Inciweb. “Structure protection is ongoing and can mean various things; securing existing fire lines surrounding homes, clearing flammable vegetation around structures when possible and installing sprinkler systems around structures.”

As of Monday, the entire complex was estimated to be 846,732 acres in total and 34 percent contained.

USFS Incident Management team member Karen Scholl said Monday that a dozer line was being constructed between the north edge of the fire and Highway 36, at the entrances to Trinity Pines.

“Fire activity picked up on the north side also, with the inversion lifting, we had a little bit drier humidities, as well as [being] a little bit hotter,” she said. “We were able to put some helicopters in with buckets and they’re doing some good work there.”

With several people remaining in Trinity Pines, fire personnel have been working with residents.

“Up around Post Mountain/ Trinity Pines area, we were able to turn the corner with the dozer line … and we’re working our way along the northwest side of that community,” Scholl said. “We also have folks in and amongst the community who are identifying water sources and working with the people in that area to have a plan to be able to provide structure protection.”

Other evacuation warnings were given along Mad River and the north end of Ruth Lake from Journey’s End to Highway 36.

South of Ruth Lake, the community of Three Forks was mostly destroyed by fire last week. Along the four miles of Upper Mad River Road south of the bridge, only a few structures and a ranch home remained intact Wednesday as small fires continued to smolder in the area.

A release from the U.S. Department of Agriculture early Monday morning noted that the fire has been burning since July and is estimated to be about 20 percent contained.

“The word of the day is focus,” said Incident Commander Mike Strawhun. “Today is day 56 of this fire and crews have been working very hard to construct control lines and find the right weather conditions to conduct firing operations.”

A forecasted “chance of rain” Friday didn’t amount to much on fires burning in Trinity County.

The southwest section of the fire continues to be active. Crews plan to use tactical burring operations along Tish Tang Ridge and Lone Pine Ridge to continue to help secure the southwest corner of the complex.

The fire is burning on the Klamath, Six Rivers, and Shasta-Trinity national forests within Humboldt, Siskiyou and Trinity counties. The Hoopa Valley Tribe is part of the joint delegation of authority with the national forests. The South Central Sierra Interagency Incident Management Team 14 is managing this incident. Team 14 will continue working closely with the Yurok Tribe, the Karuk Tribe, and community liaisons.

“Clearer air over the past several days has allowed air resources to assist ground crews. Helicopters are conducting bucket drops of water on key hot spots and have begun to remove unneeded equipment in the fire area,” according to the USDA release. “Hose lays, pumps, and other structure protection remain in Denny and Forks of Salmon.”

According to Inciweb, the Red Salmon Complex has burned over 103,000 acres and was 20 percent contained as of Monday.

According the U.S. Forest Service’s Klamath National Forest office, crews made progress on the Fox fire over the weekend.

The Fox fire was discovered on the Klamath National Forest on Sept. 14, and is burning southwest of Callahan,” according to the Inciweb information system. “The Slater Fire South Zone is supporting efforts on the Fox Fire.”

As of Monday morning, the Fox fire was currently 2,029 acres and was 30 percent contained.

While evacuation orders from the area were lifted, staff at the Yreka office said the forest will remain closed until Sept. 24.

Now at 150,000 acres, the Slater/ Devil fires burning over the state line onto southern Oregon are estimated to be 10 percent contained.

The Hobo fire and Spring fire have shown no activity since they were contained in recent weeks.

Due to active fire behavior, evacuation orders (in some locations), and present safety issues such as fire debris including fallen trees, many areas continue to be inaccessible for further evaluation. The number of damaged or destroyed structures is expected to increase, as these dangers are mitigated and further evaluation can occur

Trinity County Environmental Health is urging the public, that as evacuation orders lift, to use extreme caution. Any handling of fire debris is highly discouraged, as handling/sifting of fire debris and ash, can be extremely hazardous to human health and the environment.

Please note that this debris cannot be taken to local

solid waste facilities, and has to be removed properly with demolition permits and hazardous waste evaluations. Trinity County has requested assistance from the state’s fire debris removal process and will keep the public updated with this effort.

Please call Trinity County Office of Emergency Services at 623-1116 for additional information or to find out if your property has been impacted by the 2020 August Complex.

Horrendous air quality due to smoke from massive wildfires to the north, south, east and west of Trinity County prompted the Trinity County Public Health Director David Herfindahl to proclaim a local health emergency on Sept. 11 that was affirmed last week by the Trinity County Board of Supervisors.

State law empowers a local health official to proclaim the existence or threatened existence of a local health emergency when the county is affected or likely to be affected by an imminent threat of a contagious, infectious or communicable disease, chemical agent, non-communicable biologic agent, toxin or radioactive agent. If the Board of Supervisors is not in session, the proclamation is subject to ratification by the board within seven days and reaffirmation every 30 days thereafter until the local emergency is terminated.

The declaration places Trinity County among those eligible to receive financial assistance from federal and state resources to handle its response to the emergency. It also triggers the authority of Trinity County’s Director of Emergency Services and emergency organization to implement the Trinity Operational Area Emergency Operations Plan.

The fires named in the proclamation for producing the unhealthy air quality over widespread areas of the county are the Red Salmon Complex which began on July 27 and the August Complex North Zone fire which began on Aug. 17.

As of Tuesday, the Inciweb fire information system listed the following acreage and containment numbers for fires burning closest to Trinity County:

August Complex; 846,898 acres at 38 percent containment. The fire was discovered on Aug. 16 and was caused by lightning. Full containment is estimated for Nov. 15.

Red Salmon Complex; 104,667 acres at 28 percent containment. The fire was discovered on July 27 and was caused by lightning. No estimate has been made for full containment.

The Fox fire; 2,209 acres at 43 percent containment. The fire was discovered Sept. 14 and was determined to have been human-caused. The estimated containment date is Oct. 1.

The Slater/Devil fires; 148,677 acres at 22 percent containment. The fires were discovered on Sept. 7; cause is under investigation. No estimate for containment.

Hobo fire; 413 acres and 100 percent contained. The fire was discovered on Sept. 1 and was fully contained by Sept. 9. The cause remains under investigation.