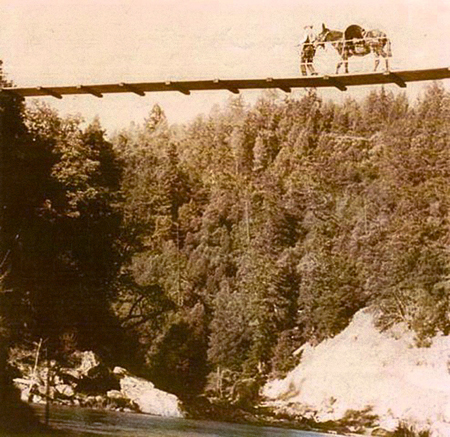 Archived photo circa 1950s of a hunter believed to be the late Fred Olsen on the Hyampom Mule Bridge with a mule carrying a dead bear. 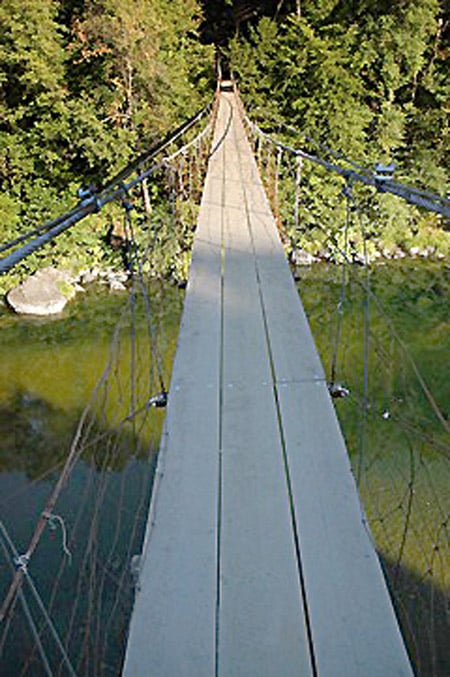 Archived photo circa 1950s of a hunter believed to be the late Fred Olsen on the Hyampom Mule Bridge with a mule carrying a dead bear.

The final planks were bolted down a couple of weeks ago, and the historic Hyampom Mule Bridge has reopened on its centennial after a three-year repair and reconstruction project.

The bridge was first constructed over the South Fork of the Trinity River in 1913, and served as a crucial link in the old Hyampom trail system that connected many of the original homesteads, as well as the gold fields in the Big Bar area. More than 200 feet long and 40 feet above the river, the bridge is 10 miles downriver from Hyampom almost exactly on the line separating Trinity and Humboldt counties.

The bridge work began in earnest in 2010 following the receipt of a U.S. Forest Service grant for $12,000 through the Trinity County Resource Advisory Council in 2009. Kent Collard spearheaded the work, teaming up with Randy Cessna and Paul Wills and many local volunteers.

A benefit dinner will be held at 5 p.m. Saturday, Sept. 28, at Brews and Screws on Main Street in Hyampom. Music will be provided by Hippie Chuck & The Rusty Pipes. Special T-shirts, raffles and fun are planned. Proceeds go toward restoration and maintenance of the historic mule bridge which turns 100 this year.