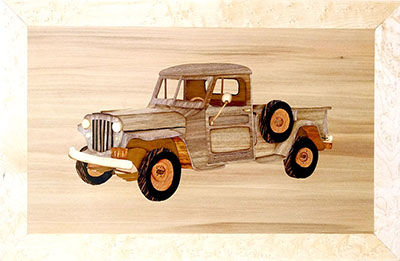 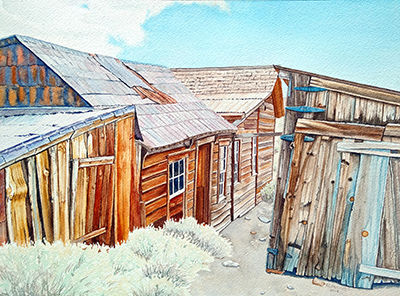 Main Street Gallery will be open in July. Please join the featured artists, Jerry Cousins and Karen Hammer, at the Art Cruise from 5 to 8 p.m. Saturday, July 4. To celebrate the reopening, Karen Hammer has donated a wonderful watercolor painting. Just make a $10 purchase and receive a raffle ticket for your chance to win her painting.

Jerry Cousins is a wood worker and furniture maker living in Trinity County. He moved here in the early 1970s, first to  Hayfork and then Hyampom, where he and his wife Susan raised two sons. They now live in Weaverville. Over the years Jerry also worked for Shasta College, Behavioral Health Services, and the Human Response Network.

Jerry has been involved in many different aspects of woodworking, building and remodeling houses, cabinet making, and now he focuses entirely on furniture making.

In 2004 he attended James Krenov’s woodworking school in Fort Bragg to learn the skill of marquetry.

Jerry explains that marquetry takes diverse species of wood veneers and pieces them together to form patterns, accents and images. Woods are chosen for their color, grain pattern, and hues. Once the wood design or “picture” is completed it is usually integrated into a piece of furniture. This show will feature several two-dimensional wall hangings as well as furniture pieces he has created.

Karen Hammer has been painting since she was 13 years old in a variety of mediums. In 2001 she settled on watercolors after taking a semester at Shasta College outreach. Karen says, “I am a product of the Norman Rockwell era and I try to incorporate humor and storytelling into my work whenever possible. I am happiest when I have a painting in the works and for that reason, I head to my studio for 2 to 4 hours every morning.

Karen loves watercolor paintings because of the clarity and lightness of the color. Watching a picture materialize from the very rough stages to the finished product creates a spectrum of emotions in her: excitement, dread, fear, frustration, hope, delight, pleasure, and a sense of accomplishment when the painting turns out to her satisfaction.

Karen has exhibited and won awards at several local art galleries. Her work has been in galleries and other venues as far north as Leaburg & Sisters, Oregon, and as far south as the Pacific Art League show in Palo Alto, Calif. One of her paintings was selected as the cover for the on-line magazine ARAZINE, in 2009. She created a poster for the Weaverville Farmers Market in 2015, and one of her paintings was chosen for a poster of Ian Scarfe’s Chamber Music group in 2017. This show included her watercolor paintings and fabric quilts.