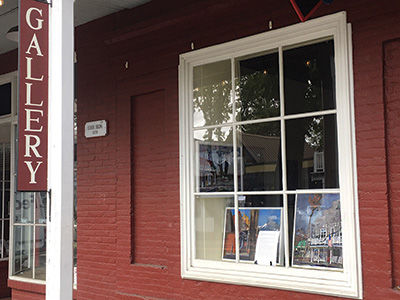 A few pieces of Andrew Walker Patterson’s artwork from the show that was scheduled for May are on display in the front window of the Main Street Gallery so you can enjoy a mini show if you are in downtown Weaverville.

A few pieces of Andrew Walker Patterson’s artwork from the show that was scheduled for May are on display in the front window of the Main Street Gallery so you can enjoy a mini show if you are in downtown Weaverville.

There has been a gallery at 490 Main Street for 22 years. When Van Matre’s closed in 1998, artist Debee Holland Olsen rented the space from Dick and Sandy Morris, and with the help of Buddy and Dave Hazard, remodeled the space into a gallery.

The Trinity County Arts Council moved its gallery from the council’s headquarters in Lee Ranch House into the current gallery space in 2001. Owing to major cutbacks in funding, in 2010, the Arts Council declared itself unable to support the Gallery.

In July 2010, a committee of five artists, spearheaded by Joy Wiltsee, launched Club CIX to raise funds to pay the gallery rent for a year.

In June 2011, the gallery was due to close unless an individual or group stepped forward to take over gallery management. A group of 10 artists came together to form a committee called Keep the Main Street Gallery Alive!

Main Street Gallery’s continuing mission is to support local and emerging artists, provide a learning environment through art workshops and instruction, showcase quality art and craft exhibits to promote the artistic and cultural development of our area. Those currently on the Board of Directors are Hugh Ashley, Bridget Carson, Melanie Hirdler, Judith Hoffman, Marta Mezo, Debee Holland Olsen and serving as Gallery Manager, Karen Hammer.

Show your support of Main Street Gallery by renewing your membership now, take this opportunity to become a new member, or you can make a one-time donation. You can make a difference.