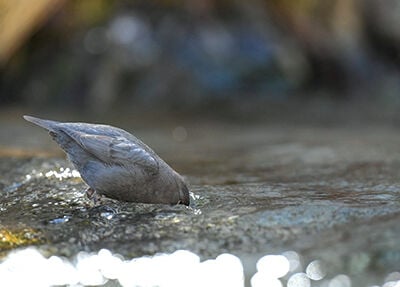 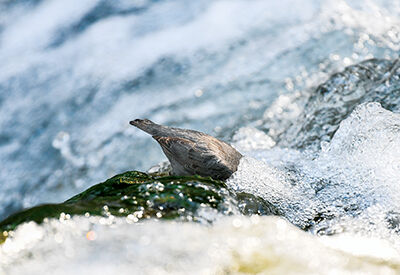 The Water Ouzel, or American Dipper, is a truly unique bird in our region. Before we get to that first let’s look at how it got its names. An “ouzel” is the other name of the Europe Common Blackbird, related to our robin. Early European visitors to Western North America saw similarities between this roundish, gray-black streamside bird and named it the Water Ouzel. Its other common name, American Dipper, comes from its habit of rapidly bobbing up and down 40-60 times per minute.

There are only five species of dippers worldwide – one each in North America, Europe and Asia and two species in South America. Dippers are the only truly aquatic songbird. They are specially adapted for a life along rivers and streams, but they don’t have webbed feet. They feed in streams with rocky bottoms, like most of our streams in Trinity County.

Their short wings aren’t great for flying, but they make them strong swimmers, allowing them to swim upstream in rushing water. They also can walk on the bottom of streams hunting the insect larvae they feed on. They also eat fish eggs. They often dip their heads under water looking for prey before they dive. They have a valve that closes over their nostrils and a clear membrane that protects their eyes when they are under water. To survive in cold water they have a very thick coat of under feathers and high capacity to carry oxygen in their blood. They also have a low metabolic rate to conserve energy.

Dippers are monogamous and defend a streamside territory of about 1 mile. Males and females build the nest, which is often described as looking like an oven. It is up to a foot in diameter, with a mossy outer covering and a cavity that is just 2-3 inches around and lined with grasses. They wet the nesting material before weaving it into the nest. The moss covering absorbs water, helping keep the occupants dry. The nests are either placed along cliff banks, under waterfalls or on rocky ledges on boulders in the middle of the stream. They are located 6-20 feet above the water to avoid getting flooded. Good nesting sites limits the number of dippers on any stream. There usually are 4-5 white eggs and dippers will often raise two broods in one season. The hatchlings are like most songbirds – helpless when they are born.

American Dippers can be found in mountain streams throughout the West up to 11,500 feet in elevation and desert streams. Dippers don’t migrate in the winter, but will move to lower elevations, especially if they breed on streams that freeze in the winter.

I have to say, I have always considered it a special treat to come upon an American Dipper when I am hiking and I really like the exotic sound of the name Water Ouzel. It adds magic to my day.